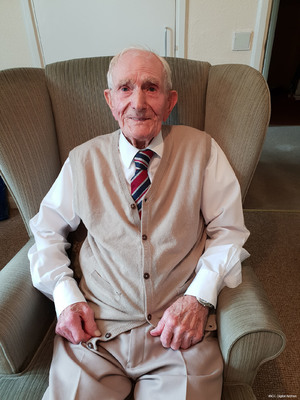 John Lee from Shrewsbury volunteered for the RAF hoping to be accepted as aircrew. However, he failed the altitude test and was posted to the RAF Regiment where he guarded crashed aircraft, protected the airfield and manned an anti-aircraft gun. He witnessed the fatal collision of two Halifaxes and was involved in recovering the bodies from the site. One man from his unit was killed by shrapnel and John had to accompany the coffin home and preside over the military funeral. As the 6th Airborne set off on their mission for D-Day John witnessed a man brought back in handcuffs for failing to take to make the jump. John and his unit also worked to shoot down flying bombs. He was unwillingly transferred to the Army until he was finally demobbed.