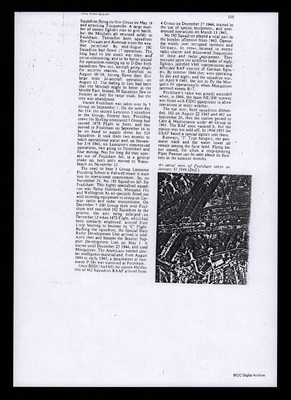 Starts with description of operations with B-25 from RAF Foulsham. Succeeded by 514 Squadron Lancaster and 1678 training flight. Replaced by 192 Squadron of 100 Group flying Halifax, Mosquito and Wellington on radio countermeasure and other special operations. Bomber support development unit arrived in April 1944. FIDO added to airfield in 1944. Station place on care and maintenance 1945. At the bottom a photograph of the airfield taken January 1946.

Squadron flying its first Circus on May 16 and attaching Triequeville. A large number of enemy fighters rose to give battle, but the Mitchells all returned safely to Foulsham. Thereafter both squadrons flew Circuses and Ramrods when the weather permitted. By mid-August 180 Squadron had flown 17 operations. The long haul to the south was time- and nerve-consuming, and to be better placed for operations running up to D-Day both squadrons flew out, aircraft going singly for security reasons, to Dunsfold on August 18/19, having flown their first large scale 24-aircraft operation on August 12. The feeling in July had been that the Mitchell might be better in the Middle East. Indeed, 98 Squadron flew to Honiley in July for range trials, but the idea was abandoned.
Vacant Foulsham was taken over by 3 Group on September 1. On the same day No 514, the second Lancaster 1 squadron in the Group, formed here. Providing crews for Stirling-orientated 3 Group had caused 1678 Flight to form, and this moved to Foulsham on September 16 to be on hand to supply crews for 514 Squadron. It took them two months to reach operational status and, on November 3/4 1943, six Lancasters commenced operations, two going to Düsseldorf and four mining. Not for long did they operate out of Foulsham for, in a general shake up, both units moved to Waterbeach on November 23.
The need to base 3 Group Lancaster Finishing School at Feltwell meant it must lose its operational commitment. So, on November 25, No 192 Squadron left for Foulsham. This highly specialised squadron was flying Halifaxes, Mosquito IVs and Wellington Xs all specially fitted out with listening equipment to snoop on German radio and radar transmission. On December 7 100 Group took over Foulsham and snatched 192 Squadron in the process, the unit being enlarged on December 12 when 1473 Flight, which had been similarly employed, arrived from Little Snoring to become its ‘C’ Flight. Backing the squadron, the Special Duty Radar Development Unit arrived in mid-April 1944 and became the Bomber Support Development Unit on May 1. It stayed until December 23 1944, and used Mosquitoes. The Americans needed similar intelligence material and, from August 1944 to early 1945, a detachment of two-seater P-38s was stationed at Foulsham.
Once BSDU had left the station Halifax IIIs of 462 Squadron RAAF arrived from 4 Group on December 27 1944, trained in the use of special equipment, and commenced operations on March 13 1945.
No 192 Squadron played a vital part in the bomber offensive from 1943. Operating widely over occupied territory and Germany, its crews listened to enemy radio chatter and discovered frequencies of these and radar equipment. They snooped upon the airborne radar of night fighters, jammed VHF transmissions and afforded RAF control of German fighters. By summer 1944 they were operating by day and night, and the squadron was, on April 9 1945, the last to fly the Mosquitoes jammed enemy R/T.
Foulsham’s value was greatly extended when, in 1944, the main NE/SW runway was fitted with FIDO equipment to allow operations in misty weather.
The wart over, both squadrons disbanded, 192 on August 22 1945 and 462 on September 24, then the station passed to Care & Maintenance under 40 Group in 1945. The RAF soon vacated it, but the station was not sold off. In 1954-1955 the USAF based a special signals unit there.
Runways, ‘T’ Type hangars, the perimeter track and the water tower all remain among the farm land. Flying has not ceased, for often a crop-spraying Piper Pawnee can be seen about its business in the summer months.