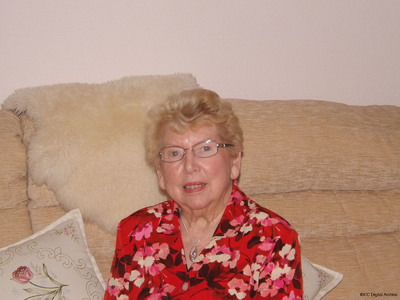 Patricia’s family lived in a 500 year old thatched cottage in Waddington. There was a bakery in the grounds, which had been started by her grandparents. Patricia’s father joined the Royal Flying Corp and one of her earliest memories was of him digging out a base for an air-raid shelter. He was mainly based at RAF Waddington as ground personnel, and provided and cared for the stores.
Patricia remembered the time when a young pilot asked her to look after the crew’s mascot kitten. He never returned. One night the church next door to their cottage was destroyed by a land mine and the family had to quickly move out of the cottage as it too had caught fire. The next morning a shelter at the base had been hit, killing fifteen Navy, Army and Air Force Institutes girls. She recalled other incidents during her father’s time in the Royal Air Force before he was discharged through failing health.