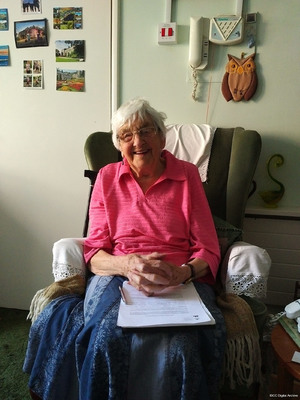 Fiona mainly lived in Southampton. On leaving school she had a job for two years but as soon as she was 17 and a half she volunteered for the Women's Auxiliary Air Force and became a wireless operator. She was posted to the far north of Scotland with Coastal Command, remaining there until the end of the war. After the war she worked at RAF Cranwell, near Lincoln, in the sergeant’s mess until she changed to general office duties. Whilst at RAF Cranwell she joined in with shows and also started a cycling club.
Fiona met her husband in 1946, left in 1947 and married in 1948. Their daughter was born in 1949. Fiona met up with some of her RAF colleagues once a month.