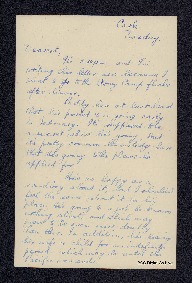 He writes of being posted to RAF Dallachy, domestic details, social activities and of a colleague’s posting. He includes details of two jobs which he think that his wife might be interested in.

Cark
Tuesday
Dearest,
It’s 5.30 p.m. and I’m writing this letter now because I want to go to the Army Camp flicks after dinner.
Boddy has at last heard that he’s posted & is going early in February. It’s supposed to be a secret where he’s going, but it’s pretty common knowledge here that he’s going to the place he applied for.
He’s as happy as a sandboy about it, but I shouldn’t feel the same about it in his place. He’s going to a job he knows nothing about, and which may prove to be even more deadly than this. In addition, he’s leaving his wife & child for an indefinite period – which may be until the Pacific war ends.
[page break]
2.
Anyway, I am now regarded as a full Flt. Cmdr., & I don’t think there’s any doubt that if I am not posted, and if Group allows the C.F.I. to have his way, I shall get my acting F/Lt., say, in March, with luck. That of course, means that I shall probably stay here at least until midsummer.
I got a letter from Shaw this morning, and am feeling cheesed as a result. He is near Aberdeen, at a P.R.U. Mosquito O.T.U.! he was put up for Ops the same time as I was, and asked for P.R.U. or Transport. His posting came through Jan 1st, the only one at Rissington to get what he wanted. All the others went on to heavies. It’s enough to make anyone envious, isn’t it?
The C.F.I. came back from leave this morning & I have decided to start as I mean to go on.
[page break]
3
Just before lunch, as it had been a clamp all morning, and there was no prospect of flying this afternoon, I suggested that B flt. instructors should have the afternoon off, since it’s our day off tomorrow. I heartily disapprove of having to sit in the office for hours on end, when there’s nothing to do, & the C.F.I. is going to get a lot more suggestions of the same kind.
I’ve just got the text book for my correspondence course, so shall be able to start work properly now.
Apparently the C.F.I. took a dim view of my going to Dalachy on Monday. He thought I was trying to get out of the E.C.7.S visit on Feb. 8. Actually, I’d sooner do the course than get an A2, because I’m expecting to get some useful gen there, but I was able to reassure him by telling him
[page break]
4
that I should be back by the 8th as the course finishes on the 6th.
I’ve copied out two adverts from the papers today, in case you’re interested.
[circled 1] Teacher wanted, days, mornings, or full time; school near Oldham; small class, elementary maths, ability to take other subjects a recommendation; also person to take P.T. one afternoon weekly; particulars
Address: W14
Manchester Guardian
Manchester 2
[circled 2] Berks, Bucks, & Oxon Bureau of Health & Sickness Records will shortly require persons of either sex to collect information from public health, hospital, and other records, and for clerical & typing work incidental to the maintenance of a mechanical health & sickness system. Knowledge of statistics medical terminology, [deleted] typing [/deleted] [inserted] filing [/inserted] etc., advantageous but not essential.
[page break]
5
Training will be given according to duties.
Salaries not less than £182.
Part time considered.
Full particulars from
H. Cotton
Records Officer,
10 Parks Rd.,
Oxford.
Last Date: Jan 29
I don’t know what you think of either of these, but the second one sounds interesting, doesn’t it?
I’ll try to find time to look in the T.E.S. tomorrow in Lancaster.
By the way, would you mind doing some washing for me? I haven’t worked it out properly yet, and I may not need it, but I shan’t have received the washing I sent away today until I come back from Dalachy in 3 weeks time. If I think I shall be short, I’d like to send some at
[page break]
6
the beginning of next week so that you can send it on to Dalachy, but I shan’t do so if I can possibly manage without.
All my love, darling,
Harold.