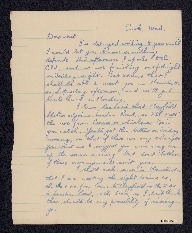 He writes of night flying and domestic arrangements.

Cark, Wed.
Dearest,
I’ve delayed writing to you until I could let you know something definite. This afternoon I spoke to the C.F.I., and we are finishing our fortnight on Friday night. That means that I shall be able to meet you in Manchester on Saturday afternoon, and we’ll go to Kent’s Bank on Monday.
I have learned that Mayfield Station adjoins London Road, so I’ll meet the 1.40 from Crewe or whichever train you catch. You’ll get this letter on Friday morning, so that if there are any changes you want me to suggest you can ring me up the same evening, but don’t bother if these arrangements suit you.
I shall make sure in Manchester that I am meeting the right trains, i.e., the [deleted] the [/deleted] 1.40 from Crewe to Mayfield or the 2.40 to London Road, or the 5.40, so I don’t think there should be any possibility of missing you.
[page break]
2.
Mother says she will be very pleased to have us. Incidentally, you’ll be surprised to learn that they’ve a house to let. They don’t think it will suit us, because it’s not a nice district, & there’s no bath or hot water, but they won’t do anything about letting it until they’re sure we don’t want it. I’ll show it to you this week-end, but like them, I doubt if you want it. Still, I appreciate their desire to help.
There’s no news of my Ops posting yet. I’m not expecting any news for another fortnight, & then it may be a case of moving quickly, as at Ossington. People usually get a few days’ notice, however.
I wish I was with you now. There seems to be so much I want to tell you & can’t put in a letter, & I want to make sure you are really fit. I think & hope the change & the rest will do you a lot of good.
The night flying is going very
[page break]
3
well, as we haven’t done any work since Wednesday. It’s 9.30 p.m. now, & we postponed at 6.30 until 10.30. I doubt whether we shall fly then but we shall do a weather test.
We boobed somewhat, last night, but fortunately the C.F.I. doesn’t know. We postponed until 10.30 & then did a weather test. It was clear, & no cloud below 1500 ft, but as we were coming in to land it started to drizzle, so we said we’d better not fly. The drizzle had stopped by the time we were out of the plane, but we stuck to our decision, especially as the Met report was bad. By one o’clock, half the stars had appeared, & at 4.0 a.m. it was a wizard night. Fortunately everyone else was in bed by then.
The weather test was a bit of [deleted] [indecipherable letters] [/deleted] a dice. Facey & I did it, he flying from the left hand seat, which is strange for him. Just as we were airborne, the artificial horizon went
[page break]
4
haywire & that is the most important instrument for flying at night. He didn’t know where he was, because it was as black as pitch outside, & yelled to me “You’ve got it,” so I had to get the aircraft under control using the other instruments. It made me think that there is a bit of danger even in the night flying that we do, although I’ve done so much without incident that I’ve come to regard it as merely a matter of course.
The taxying accident seems to have blown over without endorsement, which is a good thing. It wasn’t reported to Group, as the C.F.I. suggested to me, so no one here can endorse my log-book, as the A.O.C. is the only one who can authorise it.
I feel at the moment that I’ve been stung over the matter of my battle dress, although I don’t suppose I have. A new A.M.O. has come out making battle dress regulation wear for everyone
[page break]
5
in the Air Force, somewhat on the lines of army battle dress. As a result, we’ve got to pay money & coupons for our present suit & any we may buy in the future. This afternoon I had to give the Stores 10 coupons and £1-5-4 for the one I’m wearing now, and when I get a new one it will cost 20 coupons & £2..10..0. I feel it’s a bit hard that when I’ve looked after my clothes I should have to pay for one that’s nearly worn out, whereas if I’d done a bit of sabotage on it a month or so ago, I should have paid the same for a new one. Still, as far as I can see, it can’t be helped, so I’ve just paid up & grumbled. Anyway, this one will be falling to pieces before I buy another.
I hope you are able to see “Colonel Blimp.” I enjoyed it immensely, & think you will too. Thanks very much for your letter. That’s all for now darling, except to send you all my love.
Harold.
[page break]
P.S. I’m enclosing the latest Bank statement. It’s very good, isn’t it? I suppose you did put £30 in the post office, didn’t you? It seems strange that we should draw £50 out in a month & still have £140 left. Still, I’ve no complaints!