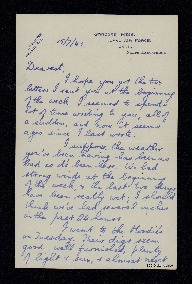 He writes of an flying incident with one of his pupils and recounts an evening in the mess with his colleagues.

OFFICERS’ MESS,
ROYAL AIR FORCE,
CARK,
NORTH LANCASHIRE.
TELEPHONE GRANGE 390.
15/7/43
Dearest,
I hope you got the two letters I sent you at the beginning of the week. I seemed to spend a lot of time writing to you, all of a sudden, and now it seems ages since I last wrote.
I suppose the weather you’ve been having has been as bad as it’s been here. We had strong winds at the beginning of the week, & the last two days have been really wet; I should think we’ve had several inches in the past 24 hours.
I went to the Moodie’s on Tuesday. Their digs seem good – well furnished, plenty of light & sun & almost next
[page break]
2
next door to the railway station & bus stop. The landlady was a nuisance at first, but now, it seems, she can’t do too much for them.
They entertained me quite well, both with food and drink. Their sideboard is like a young pub, with whisky, gin, sherry & beer, but I contented myself with one glass of sherry. I don’t know whether it was my fault, but practically the whole of the conversation turned on various drinking parties at Shawbury, & after the first fifteen had been described, I kind of lost interest in the [deleted] st [/deleted] rest. Still, it was quite a pleasant change.
I’ve also had an invitation to spend an evening at Mrs Boddy’s, as she thought
[page break]
3
I should be feeling your absence rather badly. I am; & I accepted, but I’m night flying tonight, & tomorrow is my day off, so I don’t know when I shall go.
We had a bit of a flap this afternoon. I’d scrounged two aeroplanes, & I sent pupil A up in one, taking pupil B in the other, & arranged to give A some dual when I’d finished with B.
The circuit was crowded when I landed at 3.0 p.m., so I wasn’t surprised to see A doing an overshoot. By 3.30, when most planes had landed, I began to wonder, & by four
[page break]
4
o'clock, everyone was in a flap. We decided that he must have lost his nerve & wasn’t able to get down, so I jumped into the first plane I saw, intending to formate on him & so lead him down. I managed to catch up with him as he was approaching to land, & to my surprise he calmly went down & did a good landing.
When I got down myself, I was flabbergasted to learn that he’d [deleted] b [/deleted] kept going round again (for two hours, mark you!) because he hadn’t had a green from the A.C.P., & that wasn’t necessary. The only thing the A.C.P. does is to give a red if he wants you to go round again. I was so
[page break]
5
shaken by his clottishness that I wasn’t even able to tear him off a proper strip.
I discovered, after I’d sent the letter to Dad, that I’d forgotten to enclose the 10/- note. I’ll do it next time.
No jobs in the Telegraph as yet.
I’ve become very abstemious lately.. Last night, while I was sitting in the mess, a sort of streak of obstinacy made [deleted] be [/deleted] me refuse to have a drink with Riches & Facey & others. I shouldn’t have minded one drink, but I couldn’t have let it rest at that, & I didn’t fancy paying for a round
[page break]
6
of short drinks, so that I could have one. It was just as well I kept out of it, because after I’d gone, it became a real orgy, finishing up with a hose pipe playing in the Mess, and Riches being stripped practically completely.
I draw the line at that sort of thing myself.
How I wish I could see you, darling. Life seems very empty without you.
All my love,
Harold