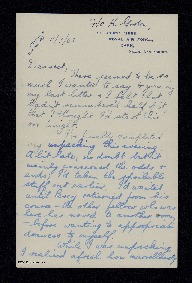 Includes news of activity at RAF Cark, including details of night flying and also social activities. He also writes of the invasion in Sicily.

F/O H. Gorton
OFFICERS’ MESS,
ROYAL AIR FORCE,
CARK,
NORTH LANCASHIRE.
TELEPHONE GRANGE 390.
11/7/43
Dearest,
There seemed to be so much I wanted to say to you in my last letter & I felt that I hadn’t remembered half of it, that I thought I’d start this one tonight.
I’ve finally completed my unpacking this evening. A bit late, no doubt, but it mainly concerned the odds & ends; I’d taken the spoilable stuff out earlier. I’d waited until Percy returned from his course – the other fellow who was here has moved to another room – before wanting to appropriate drawers to myself.
While I was unpacking I realised afresh how marvellously
[page break]
2
you look after me – everything in apple pie order when I come back from leave. Of course I like this immensely, but I appreciate even more the reason why you do it, & I only wish I could do more to show you how much I do appreciate it.
I gave your watch to a corporal this afternoon. I’ll find out how he’s got on in a day or two, & if he makes no progress I’ll take it back to the shop. If it’s humanly possible, I’ll get that watch going again for you.
I’ve discovered the Smith’s Library List in my case, so will send it with this letter.
We are now doing O i/c night flying for a week at a
[page break]
3
time, A & B flight alternately. I think it should have been my turn this week, but I passed it on to Facey – under the excuse that he’d better get it done before he goes on leave. I had the impression that he hadn’t done his fair share of night flying in the past, so thought he’d better have a spell of it now. Anyway, every time I postpone it for myself, it means one less chance of doing it before the war is over. When he calmly [deleted] considered [/deleted] came up to me last night & said he couldn’t do it as he’d too many dates next week, I refused to consider a swap, but the laugh will probably be on me tomorrow,
[page break]
4
because Riches tells me that Facey isn’t feeling too good & will probably go sick tomorrow. Then I shall have to do it.
Sickness seems prevalent at the moment; Wyver went into sick quarters this afternoon, & Riches tells me he’s got a temperature, but personally, I feel very fit indeed.
After I’d finished my letter in Grange yesterday afternoon, I’d just missed the 5.18 bus, so went to see Miss Westwood to wait until 7.8. She was very kind, told me to come any time I liked, whether she was in or not (if the door was open), and allowed me to play her piano – an awful noise I made, I’m afraid.
[page break]
Monday 9.45 p.m.
I’m due to go night flying at half past eleven, as mine are the only two pupils ready in B Flt., so I said I’d take them. It looks very doubtful whether we shall fly, however, as there’s a terrific wind blowing, and we’ve had it unless it drops.
Thank you for the parcel, darling It arrived this afternoon, just another example of the care I was talking about at the beginning of the letter.
I got your letter this morning, too, so I’ve had a good day today.
It looks to me as though you are going to have your hands full with the Italians! Have you any Sicilians among them,
[page break]
6
and what have they said about the invasion? Where are you having the extra wash basin?
I’m glad Dad had the sense to send your coat. I’ll write to thank him when I get his address.
As for Bub & Elizabeth, I can think of two children that are going to surpass them in the future!
As usual, you decry your efforts in the preserving line. I’m prepared to bet that you do it better than anyone else, whether you’ve had any experience or not.
A furnished flat doesn’t sound so good as a house, but I should think it would be worth trying. Hereford would be better than Leominster,
7
but if it suits you, have a crack at it. [circled It] [inserted] A flat [/inserted] ought to be a suitable place in which we can organise some furniture of our own. I’ll certainly send Mrs Hudson’s letter along.
You say it seems ages since we were together. I discovered with a shock today that it’s not quite a week since we left Farnworth. It seems unbelievable to me.
At the moment I am thinking of organising a 48 for about the 15th of August, just over a month from now, as that ought to be about half way between leaves. If I can you at any time
[page break]
8
by coming down, - say, when you set up in your new place, let me know, & I’ll try to fix it.
Your note with the parcel suggests that I try & find a place in Bolton. I’ll write to Arthur Rigby & ask him to keep a look-out for us.
The invasion in Sicily seems to be going well, doesn’t it? I’m delighted, because I hope it means the war will be over soon & we can be together again – for good.
All my love, darling,
Harold.