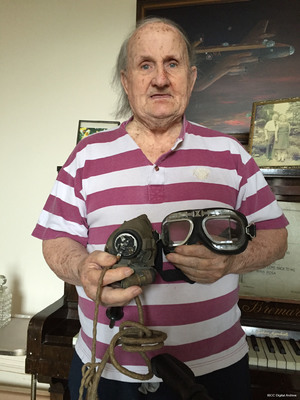 Jack Warner grew up in Huddersfield. He volunteered for the Royal Air Force and trained at RAF Filey and RAF St Athan. He completed a tour of 37 operations as a flight engineer with 428 Squadron from Middleton St George. On one mine laying operation the bomb doors on his aircraft Halifax stuck and they had to do a second run despite the heavy anti-aircraft fire. His crew were part of the attacks on coastal gun emplacements during the Normandy landings on D-Day. He remembers seeing the invasion fleet moving across the channel. He spent his twentieth birthday on an operation to Leipzig.