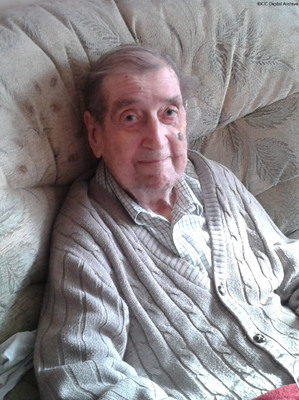 Arthur joined the Royal Air Force at the age of nineteen when war started in 1939. Arthur completed a navigation course, which lasted six weeks. When the School of Navigation in Cheshire was expanded, Arthur became staff pilot, flying from mid Cheshire across to Llandudno and then up to the Isle of Man. Arthur joined 6 Squadron and then 617 Squadron after the death of Guy Gibson and the operation to the Dortmund-Ems Canal. He completed forty-five operations. Arthur tells the story of Wing Commander Leonard Cheshire and his dog called Simon.

AP: Hello, I’m Arthur Poore, I was born in 1920, so that when war started in 19, whenever it was, I was nineteen years of age. I was, of course, extraordinary lucky in surviving everything. To survive the war is, of course, a matter of luck, I had, I had luck in spades. I volunteered for the Air Force because I didn’t want to go into the Army and er, went on a, in those days, the pre-war bombers, the second pilot did a navigation, so I had to go on a navigation course up in Cheshire, didn’t know there was a war on. And as the Air Force was expanding, I, having finished my six weeks course in the middle of Cheshire, they were expanding this School of Navigation, and I was one of the staff pilots. So, for the next two years, I was flying from mid Cheshire across to Llandudno and up to the Isle of Man and back, didn’t know there was a war on, so it was all a question of luck. Then I, I volunteered actually, I, I joined one of the main force bomber squadrons when it was 6 Squadron, and the Dambuster Squadron, 617 Squadron. Guy Gibson was killed, and they had a fairly disastrous raid on Germany, on the Dortmund-Ems Canal, lost a lot of crews, and I, of course, was a much more experienced in flying hours than my contempories, so I joined 617 Squadron. Managed to, managed to survive that, I did forty-five trips altogether, so that was just a question of luck. After Guy Gibson was flight command, was squadron commander, we had Wing Commander Cheshire as Squadron Commander. He was a very charismatic character, he had a good dog called Simon, I always remember. We, if we weren’t flying on ops, we’d be, we’d all be down in the officers mess drinking beer, and he’d be upstairs writing letters of consolation to the lost ones, and he had a dog called Simon, and one day we were down in the mess, drinking, and he came down, to our surprise, and had a drink with us. And he said, ‘Now, Simon’s a very clever dog’. And we said, ‘Oh, why is that?’ And he said, ‘I’ll show you’. And Wing Commander Cheshire said to Simon the dog, ‘Simon, what will you do if we lose the war?’ And Simon laid down on his side and closed his eyes and pretended to be dead. And he said, ‘Simon, what would you do when we win the war?’ and Simon got up and danced on his hind legs. So that, that was his little trick. Wing Commander Cheshire was a remarkable man.
MJ: On behalf of the International Bomber Command, I’d like to thank Arthur Poore, Squadron Leader, 617 Squadron, for his recording on the date of 20th October, 2015, at 12 o’clock. Thank you.