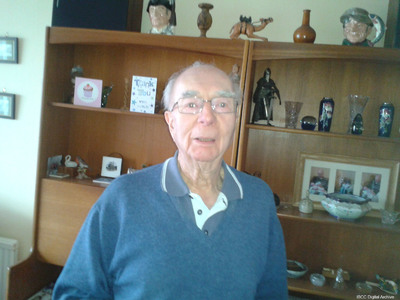 Ian Hawkins was training to be a teacher when he decided to volunteer for the RAF, joining in 1941. He commenced training under the Arnold Scheme in Canada and the United States and passed the course as a pilot. He returned to England as a sergeant and eventually joined 214 Squadron flying Stirlings. After sixteen operations he became an instructor at an Operational Training Unit at RAF Chipping Warden. He later returned to flying, this time with 299 Squadron, towing gliders in Stirlings. He describes how, at the end of the war he was flying a variety of aircraft with Transport Command before being de-mobbed. He returned to teaching but joined the RAFVR to fly at weekends and in 1951 was pleased to be invited back to the RAF as a flying instructor. He was later de-mobbed again and returned to teaching for the rest of his working life.

MJ: Why is it called brown jewels [?]

IH: I don’t think really I have anything more to say. I know that the soldiers were very happy when we, when we brought them back to, er, this, this country after the war was over. The Stirlings were converted into troop char– troop carriers, as well as, er, glider towers.

MJ: So you got everything.

MJ: I’ll turn it off. On behalf of the International Bomber Command I’d like to thank Ian Hawkins at his home in Lee-on-Solent on the date of the 3rd of December 2015. For this recording once again we thank you.