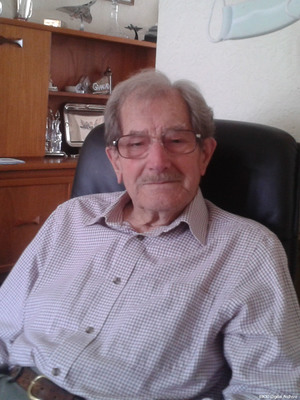 Charles Bland
Charles joined the Royal Air Force in February 1942 and went to RAF Halton as an Aircraft Apprentice.
He tells of his training at Halton, and describes the different trades and his exams to become an Leading Aircraftsman 1st Class, where he was then transferred to a Repair and Inspection Unit (R&I) working on Spitfire engines.
Charles then went to India via the Suez Canal and then on to Ceylon to 121 Repair and Salvage Unit, looking after 2 squadrons of Beaufighters and 1 squadron of Spitfires, but he says that because he was an apprentice, he could turn his hand to anything.
He was posted to instruct at a Motor Transport Unit, and spent time learning about the maintenance of other equipment including diesel engines.
Charles was posted to 109 Maintenance Unit, repairing Merlin engines, however at this time the V Bombers were coming into service. He trained as a Crew Chief and after passing these exams he was assigned to the Avro Vulcan XA908, at RAF Waddington.
Charles related the stories of the work he did when the Vulcan had hydraulic failure at Goose Green, the bombing competition in Florida where the aircraft suffered broken bomb bay doors and a cracked bomb aimers window, and the trip home from Bermuda with no fuel in one tank and a broken bogie beam.