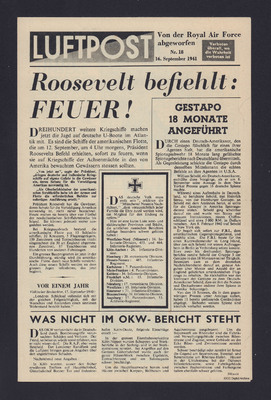 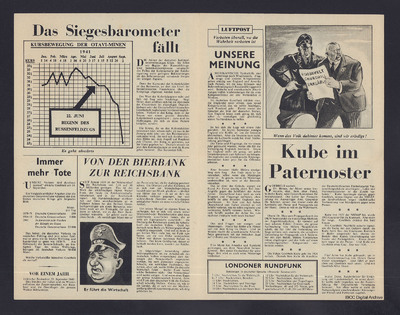 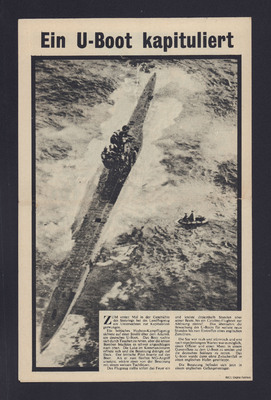 300 more American warships are now protecting shipping routes following President Roosevelt’s order on 12 September. Numbers of vessels in American navy at the outbreak of war are listed and the number will steadily increase.

William Sebold, a double agent for 18 months, testified against 16 German spies in New York on 8th September. 11 had given full confessions and a further 17 had been recently arrested. The Gestapo provided him with the names and addresses of their spies in the United States.

Provides information on damage to parts of Cologne, which it claims, the German authorities do not wish to share.

German losses said to be five times higher than First World War and a hundred times more than in 1870-1871, countering [Joseph] Goebbels’s claim that the losses are ‘quite normal’.

Blames Herr Walter Funk [Reich Minister for Economic Affairs, President of the Reichsbank] for the huge increase in bank note circulation. Article mocks his monetary theory and concludes he should be held accountable.

Britain now sending aircraft and military equipment to Russia, showing it is strong enough to prevent any invasion. Hitler will still want to invade, which is why the RAF has conducted operations against German and Axis ships. The first conference of the three global powers [America, Britain and Russia] to take place in Moscow.

Feud between Wilhelm Kube and Goebbels goes back to 1924. Kube is about to become Commissioner General for Belarus. Kube is said to be in the ascendancy, whilst Goebbels and Walter Darré, Reich Minister of Food and Agriculture, are becoming less significant.

Photograph and description of U-boat surrender after being spotted by a Hudson aircraft on a patrol of the Atlantic; the first time a landplane has caused a submarine to surrender.