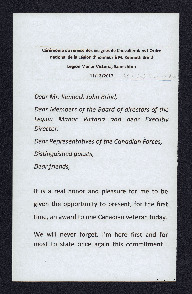 A speech read at the award ceremony for Kenneth Brind

Dear Members of the Board of directors of the Legion Manor Victoria and dear Executiv [sic]
Director,
Dear Representatives of the Canadian Forces, Distinguished guests,
Dear Friends,

It is a real honour and pleasure for me to be given the opportunity to present, for the first time, an award to one Canadian veteran today.

We will never forget. I’m here first and for the most to state once again this commitment:

We will never forget those who fought the battles, those who fell in combat. Especially those who fought during the two worldwide conflicts. We will never forget our comrades in arms, killed in the flower of their youth as they threw themselves into the assault on the European continent to free one of this nation’s founding people from the yoke of fascism. This sacrifice only further enriched this Franco Canadian alliance that was forged in spilled blood.

France and the other nations that you liberated from Nazi barbarism will never forget.

The world has changed since 1945. There are new challenges, of a new nature, facing us today: Daesh, the migrant crisis, climate change. We know that these challenges are partially responsible for a number of conflicts around the world. Canada, ever our friend as a nation, our Ally in NATO, has always been at France’s side in the defense of the higher interest of our civilization. Together, we will carry on.

Today it’s an honor to present to you the insignia of Knight of the National Order of the Legion of Honor, France’s highest national order. Beyond the distinction that is awarded today, the essential thing is the duty to remember all those who took part in very

Dangerous operation during WWII. This duty to remember is shouldered by a great many of your compatriots today. They go to France in great numbers to visit those places that are marked by Canada’s commitment to the two global conflicts that punctuated the 20th century :Dieppe, Juno Beach, the Somme, Beaumont Hamel, and, of course, Vimy. Especially this year, we have special thoughts to the Vimy Ridge to pay tribute to the 3598 Canadian soldiers who fell at Vimy. This was the first time in history of Confederation that a Canadian contingent fought successfully – under Canadian command. The message of Vimy Ridge is one pf bravery and sacrifice. To underscore the sacrifice made by Canada, which suffered 60,000 fatalities during the First World War, France granted Canada 107 hectares of land at Vimy to build and maintain a memorial. That iconic site is today considered one of the most stirring of all First

The Legion of Honour was created by Napoleon Bonaparte in 1802, when he was First Consul, to reward eminent merit in service to France. In light of your remarkable service records and in recognition of your eminent contributions to the liberations of my country, Emmanuel Macron, the new President of the Republic of France, has signed the decrees representing your nomination to the order of Knight of the National Order of the Legion of Honour.

As Consul General of France in Western Canada, I am proud to proceed with this decoration ceremony. Through you, on behalf of my compatriots, I would like to honour all of the Canadian heroes who have served my country.

This is the sacrifice that more than 45,000 Canadians made during the Second World War.

The D-Day was the very first step that enables liberty, justice and human dignity to break through.

Canadian soldiers were on the front lines, and it is with extraordinary bravery and sacrifice that they landed on Normandy beaches that brought peace to the continent.

As a young man, you were hoping to go to Oxford, but when the second world war broke out, you abandoned that dream and enlisted in the RAF early 1940 at the age of 17.

After graduated as an Ai Navigator in 1943, you joined a bomber crew. You were one the most courageous Navigator in the Royal Air Force on the Lancaster Bomber with 626 Squadron.

You completed a full tour of 30 operations between June and October 1944.

Nearly half of his 30 missions were flown over my country, France. You participated in bombing attacks against Communications links, V-weapon sites and Troop concentrations, including the major bombing attack on Caen in support of the ground assault and attacks on the Falaise pocket.

The French people will never forget the act of bravery that you accomplished to help restore our freedom. To you and your comrades, thank you so much for fighting at our side for freedom and democracy.

honored and pleased to thank you Mr. by bestowing upon you the medal of t of the Legion d’Honneur.

Consul General of France in Western Canada, “Ceremony awarding the Insignia of Knight in the National Order of the Legion of Honor to Kenneth Brind,” IBCC Digital Archive, accessed May 26, 2022, https://ibccdigitalarchive.lincoln.ac.uk/omeka/collections/document/34758.