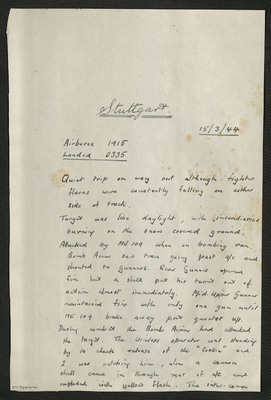 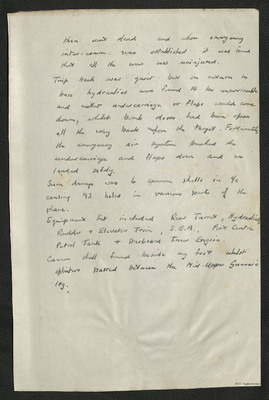 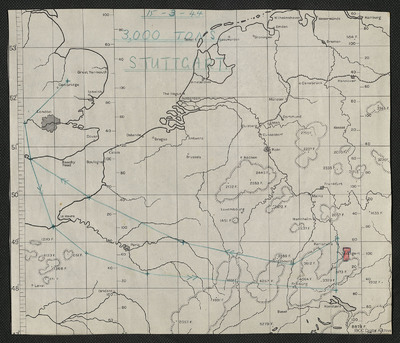 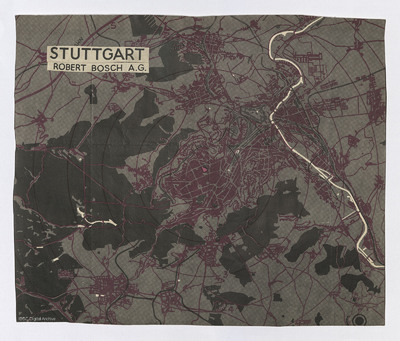 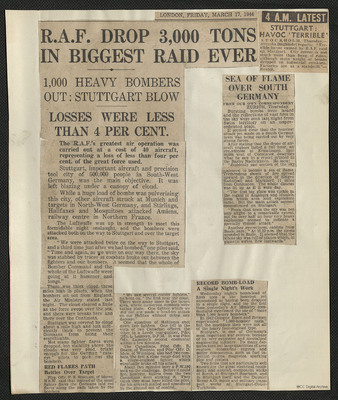 Five items, Edward's account of the operation which was eventful for the crew, They were attacked over the target by an Me 109, the aircraft was badly damaged but bombed and returned to base, none of the crew were injured. They had to blow the undercarriage down as the hydraulics had been damaged. Edward's navigation plot, the expected H2S plot of the target. There is a collection of newspaper clippings some of them from neutral cities, commenting in some detail on the Stuttgart operation.

Quiet trip on way out although fighter flares were constantly falling on either side of the track.

Target was like daylight, with incendairies [sic] burning on the snow covered ground.

Attacked by ME 109 when on bombing run. Bomb Aimer saw trace going past a/c and shouted to gunners. Rear Gunner opened fire but a shell put his turret out of action almost immediately. Mid. Upper Gunner maintained fire with only one gun until ME 109 broke away port quarter up. During combat the Bomb Aimer had attacked the target. The Wireless operator was standing by to check release of the “Cookie” and I was watching him, when a cannon shell came in through rear of the a/c and exploded with yellow flash. The inter-comm

then went dead and when emergency inter-comm. was established it was found that all the crew was uninjured.

Trip back was quiet but on return to base hydraulics were found to be unservicable and neither undercarriage or flaps would come down, whilst bomb doors had been open all the way back from the target. Fortunately the emergency air system pushed the undercarriage and flaps down and we landed safely.

Sum damage was 6 cannon shells in a/c causing 93 holes in various parts of the plane.

Cannon shell found beside my foot whilst splinters passed between the Mid-Upper Gunners leg.

[map of route to Stuttgart & return]

LOSSES WERE LESS THAN 4 PER CENT.

The R.A.F.'s greatest air operation was carried out at a cost of 40 aircraft, representing a loss of less than four per cent. of the great force used.

Stuttgart, important aircraft and precision tool city of 500,000 people in South-West Germany, was the main objective. It was left blazing under a canopy of cloud.

While a huge load of bombs was pulverising this city, other aircraft struck at Munich and targets in North-West Germany, and Stirlings, Halifaxes and Mosquitoes attacked Amiens, railway centre in Northern France.

The Luftwaffe was up in strength to meet this formidable night onslaught, and the bombers were attacked both on the way to Stuttgart and over the target area.

"We were attacked twice on the way to Stuttgart, and a third time just after we had bombed," one pilot said. "Time and again, as we were on our way there, the sky was stabbed by tracer as combats broke out between the fighters and our bombers. It seemed that the whole of Bomber Command and the whole of the Luftwaffe were going at it hammer and tongs.”

There was thick cloud, three miles high in places, when the bombers set out from England, the Air Ministry stated last night. The cloud cleared a little as the force swept over the sea and there were breaks here and there over the Continent.

Stuttgart was covered by cloud about a mile high and just sufficiently thick to prevent the Germans from using their searchlights.

Not many fighter flares were dropped, but visibility above the clouds was very good, bright enough for the German pilots to pick out the bombers.

Flyg. Offr. P. E. SINCLAIR. of Moree, N.S.W. said that instead of the usual fighter flares the Germans laid red flares along the path taken by the bombers.

“We saw several enemy fighters,” he went on, “the first near the coast. There were many more in the target area, where numerous combats were taking place. One fighter which we did not see made a head-on attack on our Halifax without doing any damage.”

One squadron of Halifaxes shot down two fighters. One fell to the guns of two Canadian officers, the other to a Leeds rear-gunner, Pilot Offr. L. LAZENBY, D.F.M. It was Pilot Offr. Lazenby’s second encounter within a few minutes.

The Canadians, Pilot Offr. R. DEATH, of Toronto, and Pilot Offr. D. MAW, of Winnipeg, also had two combats, the first a close range duel with a single-engined fighter, which eventaully broke off his attack.

About two minutes later a F.W. 190 took up the challenge. Before it could fire, however, bullets from the two Canadians were striking it. They think they must have killed the pilot, for his aircraft stalled and nose-dived to the ground out of control.

STOCKHOLM, Thursday.-
Svenska Dagbladet reports: “Terrible havoc caused by R.A.F. raid on Stuttgart. City centre is not much more than heap of ruins, although main weight of bombs dropped on industrial outskirts. Factories are at a standstill." –
Reuter.

SEA OF FLAME OVER SOUTH GERMANY

FROM OUR OWN CORRESPONDENT

Bursting bombs were heard and the reflections of vast fires in the sky were seen last night from Swiss territory on an unprecedented scale.

It seemed clear that the heaviest attack yet made on a South German town was being carried out by very strong forces.

After stating that the drone of aircraft engines lasted a full hour, an eye-witness at Ermatingen, four miles west of Constance, describes what he saw in a report printed in the Basler Nachrichten. He says:

"Suddenly one section of the sky appeared to become a sea of flame. Tremendous sheets of fire spread upward in the direction of Singen Radolfzell and Markdorf, 11 miles from Constance. The whole district was lit up as if it were day.

"The first big glare was visible in the region of Augsburg and Munich, from which area loud explosions came. But the main attack seemed concentrated on Stuttgart.

“From that town the sky was not only alight to a remarkable extent, but for over half an hour very heavy explosions seemed to indicate a specially violent attack."

Another eye-witness, cabling from Basle, says: “At 10.22 p.m. the sirens sounded in Basle. It seemed that the whole sky was full of planes which, in gigantic waves, flew eastwards."

Wednesday night's bomb-load of 3,000 tons is the heaviest yet announced as having been dropped in a single night, and for the first time yesterday's Air Ministry communiqué mentioned the use of "more than 1,000 heavy bombers."

In 1942 Cologne, Essen and Bremen experienced “1,000-bomber raids." but the machines then were not all of the heavy four-engined type.

Stuttgart, is one of Germany’s most important war centres. because of its very extensive and specialised engineering industry. Its many factories turn out large quantities of aero engines submarine engines and, motor components such as fuel injection pumps, magnetos. sparking plugs and pistons.

Two firms that are particularly well known are the great electrical equipment and aircraft component works of Bosch, at Stuttgart Sourbach, and in Stuttgart itself, and the Daimler A.G. motor and military transport works at Stuttgart-Unter-Turkheim.