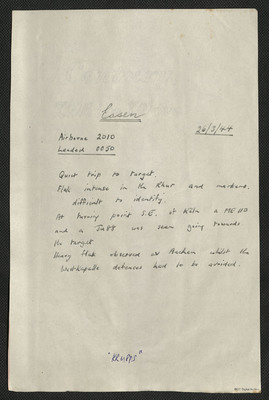 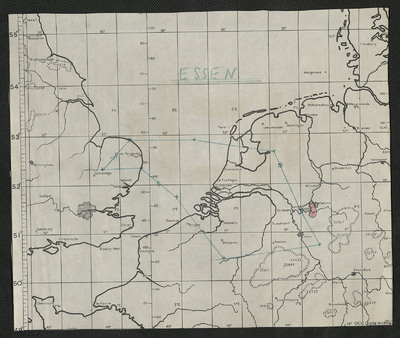 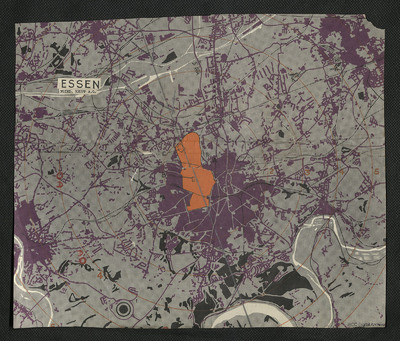 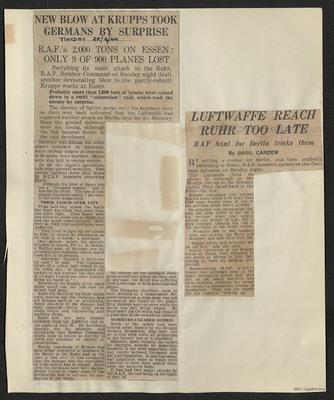 Four items, Edward's description of the operation to the Krupp works, his navigation plot, the expected H2S plot of the target. Two newspaper clippings suggesting that the return to the Krupp works after a brief respite was to destroy the rebuilding work that had been carried out and that a feint toward Berlin had confused the German nightfighters.

Flak intense in the Ruhr and markers difficult to identify.

At turning point S.E. of Köln a ME 110 and a JU 88 was seen going towards the target

Heavy flak at Aachen whilst the West Kapelle defences had to be avoided.

[map of route to Essen & return]

Switching its main attack to the Ruhr, R.A.F. Bomber Command on Sunday night dealt another devastating blow to the partly-rebuilt Krupps works at Essen.

Probably more than 2.000 tons of bombs were rained down in a swift "saturation" raid, which took the enemy by surprise.

The absence of fighter packs until the bomber's were on their way back indicated that the Luftwaffe had expected another attack on Berlin, says the Air Ministry. Even the ground defences were not strong, although the flak became fiercer as the raid developed.

Hanover was among the other places attacked in Germany, while railway targets at Courtrai in Belgium, were bombed. Mines were also laid in enemy waters.

In all the night's operations only nine aircraft were lost. Two enemy fighters were shot down by R.C.A.F. bombers attacking Essen.

Although the blow at Essen was not a "thousand bomber" raid, it was not far short. The loss of nine planes represents about 1 per cent. of the force despatched.

From half-way across the North Sea there was thick haze more than two miles high. Over Essen were two layers of cloud, one at 10,000 feet and one much nearer ground. Both were so thick that searchlights were ineffective.

"They tried to light up the clouds so that we should be silhouetted as we went in to bomb," a pilot said.

One minute before his aircraft dropped its bombs. Flt. Lt. D. Davies, a Halifax pilot, of Bargoed, saw an extraordinary explosion which lasted from five to 10 seconds.

"Somebody dropped a bull's-eye all right," he said. "The explosion threw of a yellow light which lit up
the whole sky. It illuminated the cockpit of our aircraft like day, and in its glare I could see other aircraft flying all round us."

Because of the density of the cloud pilots could not see just how the attack had gone.

Since the Battle of the Ruhr ended eight months ago the Germans had got Krupps back in to production. About one-fifth of the damage had been repaired - rolling mills, press shops, forges and engineering and machine shops.

Essen had not been heavily attacked since the 2,000-ton raid on the night of July 25. Sir Archibald Sinclair, the Air Minister. said afterwards that Bomber Command might have to return to the city to check any attempts at partial re-construction.

Nearly two-thirds of Krupps had been either destroyed or damaged in the Battle of the Ruhr, and by the time it was over it was estimated that the damage was the equivalent of a six-month loss of output. Since then the Germans have been methodically trying to repair some of the devastation and to increase the production of the works.

To rebuild all the damaged workshops would have taken too long, and, in any case. the Reich was suffering from a shortage of both materials and labour.

Much of the debris had been cleared away, mainly by the Krupps workers themselves, who were put on to this work when all production in the factory was at a standstill.

Hanover, more recently the target for daylight attacks by American bombers, is the most important railway centre between Germany and the Low Countries. It also has many war industries, some of which were reported to have been moved there from the battered Ruhr.

It has had four major attacks by the R.A.F., the last being on the night of Oct. 18.

RAF feint for Berlin tricks them

By setting a course for Berlin, and then suddenly switching to Essen, R.A.F. bombers outwitted the German defences on Sunday night.

The Luftwaffe held its fighters to intercept on the [indecipherable word] mile run up to the German capital. They raced back to the Ruhr too late.

Bomber Command had cracked Essen's arms works with more than 3,500 tons - harder than in any of the previous seven heavy attacks.

So complete was the surprise that even the guns failed to put up a big barrage when the assault started just before 10 p.m. but it grew stronger towards the end of the half hour of the bomb torrent.

Probably 800 or 900 bombers were out raiding the Ruhr and Hanover, and only nine were lost.

“Happy Valley was certainly not its old self," said one pilot.

Nearly two-thirds of the Krupps works at Essen were damaged in the battle of March to July 1943, costing at least six months' production

Reconnoitring R.A.F. planes found that although some of the more devastated plants had been left to rot, about one-fifth had been repaired, enabling the enemy to resume a substantial volume of production. That was the reason for the renewed "stoking up."