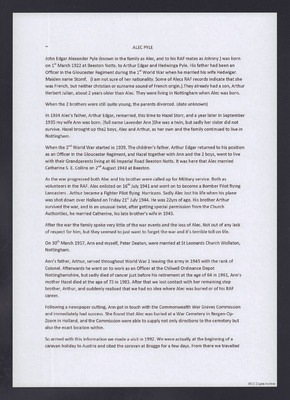 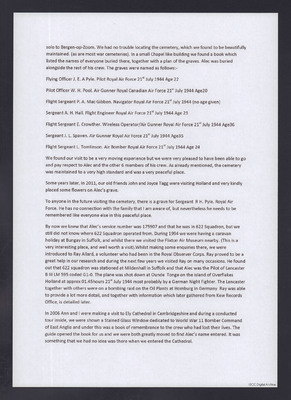 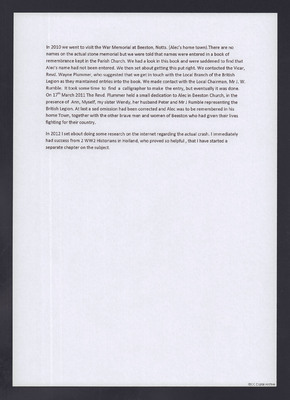 A biography of Alec written by his step sister's husband. He details the family history, his search for the grave site, his visit to the grave in 1992 and their research on the crash.

John Edgar Alexander Pyle (known in the family as Alec, and to his RAF mates as Johnny.) was born on 1st March 1922 at Beeston Notts. to Arthur Edgar and Hedwinga Pyle. His father had been an Officer in the Gloucester Regiment during the 1st World War when he married his wife Hedwiger. Maiden name Stomf. (I am not sure of her nationality. Some of Alecs RAF records indicate that she was French, but neither Christian or surname sound of French origin.). They already had a son, Arthur Herbert Julian, about 2 years older than Alec. They were living in Nottingham when Alec was born.

When the 2 brothers were still quite young, the parents divorced. (date unknown)

In 1934 Alec’s father, Arthur Edgar, remarried, this time to Hazel Storr, and a year later in September 1935 my wife Ann was born. (full name Lavender Ann) She was a twin, but sadly her sister did not survive. Hazel brought up the 2 boys, Alec and Arthur, as her own and the family continued to live in Nottingham.

When the 2nd World War started in 1939, The children’s father, Arthur Edgar returned to his position as an Officer in the Gloucester Regiment, and Hazel together with Ann and the 2 boys, went to live with their Grandparents living at 46 Imperial Road Beeston Notts. It was here that Alec married Catherine S.E. Collins on 2nd August 1943 at Beeston.

As the war progressed both Alec and his brother were called up for Military service. Both as volunteers in the RAF. Alec enlisted on 16th July 1941 and went on to become a Bomber Pilot flying Lancasters. Arthur became a Fighter Pilot flying Hurricans. [sic] Sadly Alec lost his life when his plane was shot down over Holland on Friday 21st July 1944. He was 22 yrs of age. His brother Arthur survived the war, and in an unusual twist, after getting special permission from the Church Authorities, he married Catherine, his late brother’s wife in 1945.

After the war the family spoke very little of the war events and the loss of Alec. Not out of any lack of respect for him, but they seemed to just want to forget the war and it’s terrible toll on life.

On 30th March 1957, Ann and myself, Peter Deaton, were married at St Leonards Church Wollaton, Nottingham.

Ann’s father, Arthur, served throughout World War 2 leaving the army in 1945 with the rank of Colonel. Afterwards he went on to work as an Officer at the Chilwell Ordinance Depot Nottinghamshire, but sadly died of cancer just before his retirement at the age of 64 in 1961, Ann’s mother Hazel died at the age of 73 in 1983. After that we lost contact with her remaining step brother, Arthur, and suddenly realised that we had no idea where Alec was buried or of his RAF career.

Following a newspaper cutting, Ann got in touch with the Commonwealth War Graves Commission and immediately had success. She found that Alec was buried at a War Cemetery in Bergen-op-Zoom in Holland, and the Commission were able to supply not only directions to the cemetery but also the exact location within.

So armed with this information we made a visit in 1992. We were actually at the beginning of a caravan holiday to Austria and sited the caravan at Brugge for a few days. From there we travelled

solo to Bergen-op-Zoom. We had no trouble locating the cemetery, which we found to be beautifully maintained. (as are most war cemeteries). In a small Chapel like building we found a book which listed the names of everyone buried there, together with a plan of the graves. Alec was buried alongside the rest of his crew. The graves were named as follows:-

We found our visit to be a very moving experience but we were very pleased to have been able to go and pay respect to Alec and the other 6 members of his crew. As already mentioned, the cemetery was maintained to a very high standard and was a very peaceful place.

Some years later, in 2011, our old friends John and Joyce Tagg were visiting Holland and very kindly placed some flowers on Alec’s grave.

To anyone in the future visiting the cemetery, there is a grave for Sergeant R H. Pyle. Royal Air Force. He has no connection with the family that I am aware of, but nevertheless he needs to be remembered like everyone else in this peaceful place.

By now we knew that Alec’s service number was 175907 and that he was in 622 Squadron, but we still did not know where 622 operated from. During 1994 we were having a caravan holiday at Bungay in Suffolk, and whilst there we visited the Flixton Air Museum nearby. (This is a very interesting place, and well worth a visit). Whilst making some enquiries there, we were introduced to Ray Allard, a volunteer who had been in the Royal Observer Corps. Ray proved to be a great help in our research and during the next few years we visited Ray on many occasions. He found out that 622 squadron was stationed at Mildenhall in Suffolk and that Alec was the Pilot of Lancaster B III LM 595 coded G1-0. The plane was shot down at Ounde Tonge on the island of Overflakes Holland at approx 01.45 hours 21st July 1944 probably by a German Night Fighter. The Lancaster together with others were on a bombing raid on the Oil Plants at Homburg in Germany. Ray was able to provide a lot more detail, and together with information which later gathered from Kew Records Office, is detailed later.

In 2006 Ann and I were making a visit to Ely Cathedral in Cambridgeshire and during a conducted tour inside, we were shown a Stained Glass Window dedicated to World War 11 Bomber Command of East Anglia and under this was a book of remembrance to the crew who had lost their lives. The guide opened the book for us and we were both greatly moved to find Alec’s name entered. It was something that we had no idea was there when we entered the Cathedral.

In 2010 we went to visit the War Memorial at Beeston, Notts. (Alec’s home town). There are no names on the actual stone memorial but we were told that names were entered in a book of remembrance kept in the Parish Church. We had a look in this book and were saddened to find that Alec’s name had not been entered. We then set about getting this put right. We contacted the Vicar, Revd. Wayne Plummer, who suggested that we get in touch with the Local Branch of the British Legion as they maintained entries into the book. We made contact with the Local Chairman, Mr J.W. Rumble. It took some time to find a calligrapher to make the entry, but eventually it was done. On 17th March 2011 The Revd. Plummer held a small dedication to Alec in Beeston Church, in the presence of Ann, Myself, my sister Wendy, her husband Peter and Mr J Rumble representing the British Legion. At last a sad omission had been corrected and Alec was to be remembered in his home Town, together with the other brave men and women of Beeston who had given their lives fighting for their country.

In 2012 I set about doing some research on the internet regarding the actual crash. I immediately had success from 2 WW2 Historians in Holland, who proved so helpful, that I have started a separate chapter on the subject.