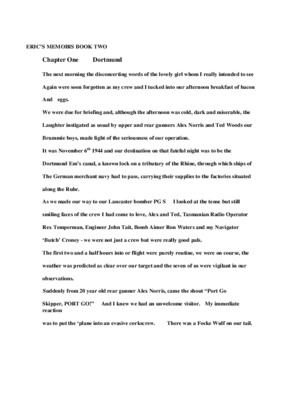 Describes operations as Lancaster pilot. Detailed description of last sortie to attack Dortmund-Ems canal on 6 November 1944. His aircraft was attacked by FW 190 which was driven of and then set on fire by another fighter attack. Describes bailing out, evading along with his flight engineer. John Tate. Goes on to describe capture, incarceration and interrogation at Dulag Luft and transfer to Staklag Luft 3. Provides detail account of life in prisoner of war camp and long march by foot and train back to Germany. Covers liberation and repatriation.