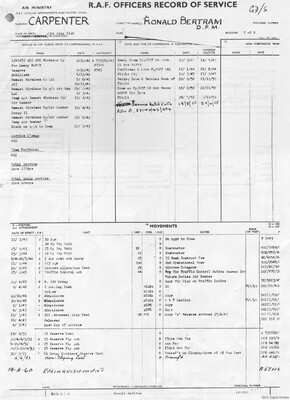 Gives details of Ronald's service. Was initially trained as a Wireless operator but remustered to Air Bomber in June 1942. He did his first tour on No 10 Squadron flying in the Halifax from RAF Melbourne and was awarded the DFM. He was commissioned in July 1943. Between tours he had a training role on 20, 15 and 10 OTUs. He undertook a second operational tour on No 223 Squadron flying in the B-24 as part of No 100 Group from RAF Oulton. He attended a Traffic Control School in February 1945 and then went out to the Far East to H.Q. 229 Group. He was released in April 1947. He later served in the RAFVR for five years.