27 items. The collection concerns Flight Lieutenant Ronald Carpenter DFM (149832 Royal Air Force). He flew a tour of operations as a bomb aimer with 10 Squadron and with 223 Squadron in 100 Group on electronic countermeasures. The collection contains his log book, documents and photographs.

The collection has been donated to the IBCC Digital Archive by Ronald Carpenter and catalogued by Trevor Hardcastle. 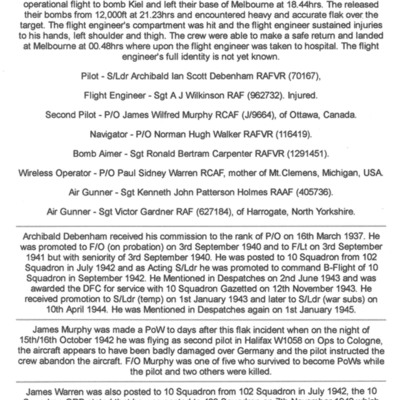 Records an incident to Squadron Leader Debenham's crew, Ronald Carpenter was the Bomb Aimer, flying 10 Squadron Halifax DT546 on 13/14 October 1942, when the aircraft was damaged by anti-aircraft fire and the flight engineer injured. It includes a… 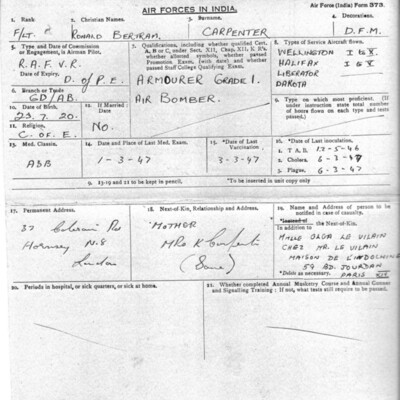 The Air Forces India F373 has his service details and next of kin. The Form 256 is the Medical Report Prior to Release, records that he has served in the U.K. for 4yrs 7 months, India 1 yr, Indo China 6 months and Burma 6 months. It was carried out…

One page of the operations for June 1942, records one Wellington failing to return from operation to Essen on 1/2 June. It also records two Wellingtons successfully attacking Bremen on 25/26 June, one of them was captained by Flight Lieutenant… 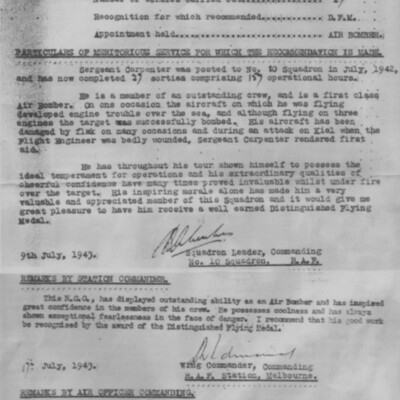 Has recommendation from his Squadron Commander, his Station Commander and the No 4 Group Air Officer Commanding. Was gazetted on 14 September 1943. 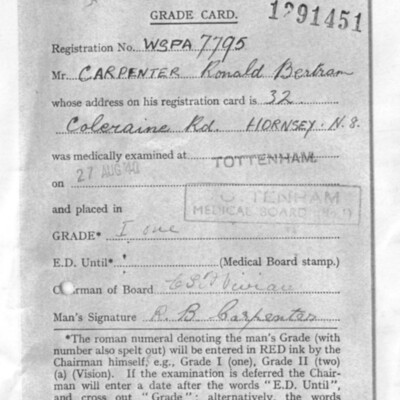 Issued by the Tottenham Medical Board on initially being called up, was Grade 1. 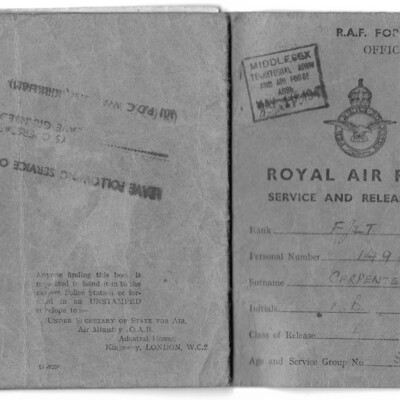 Has his service details, is stamped Middlesex Territorial Army and Air Force Association. 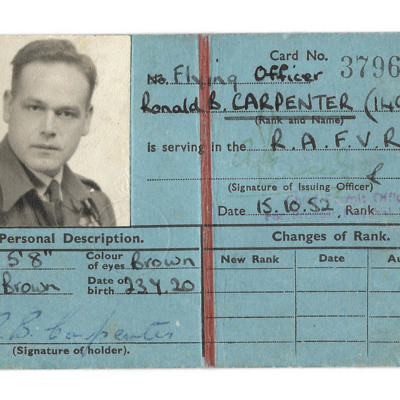 Has his photograph and personal details. 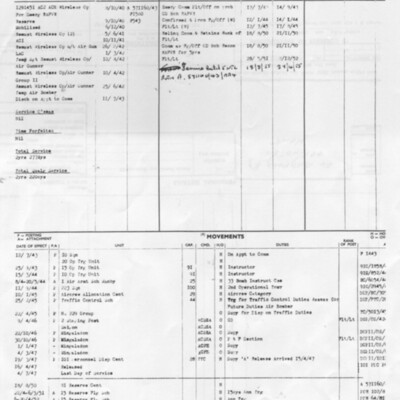 Gives details of Ronald's service. Was initially trained as a Wireless operator but remustered to Air Bomber in June 1942. He did his first tour on No 10 Squadron flying in the Halifax from RAF Melbourne and was awarded the DFM. He was commissioned… 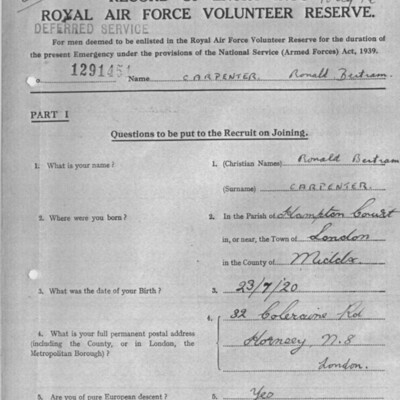 Ronald's record of entry to the RAF and contains his personal details service number etc. 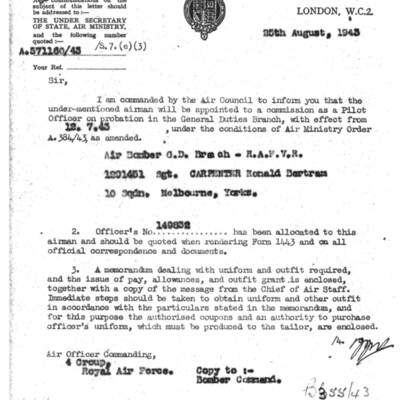 From the Air Ministry, to everyone who needs to know to enable Ronald to obtain his uniform and new pay rates and allowances etc. 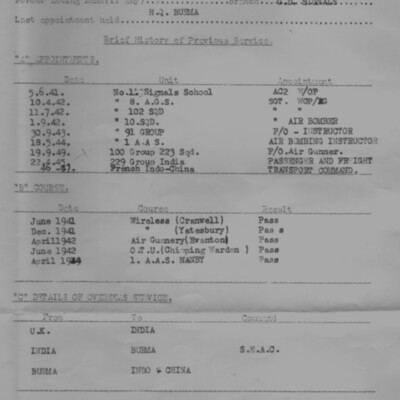 Ronald is applying for a commission in the ground branch and the form has a brief list of his RAF appointments and courses. 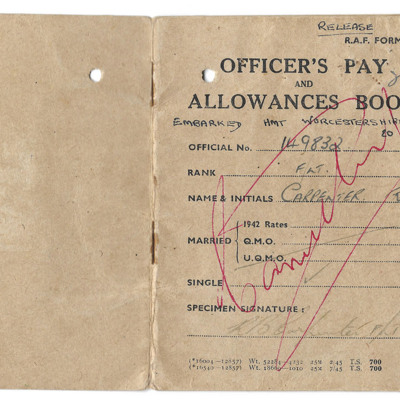 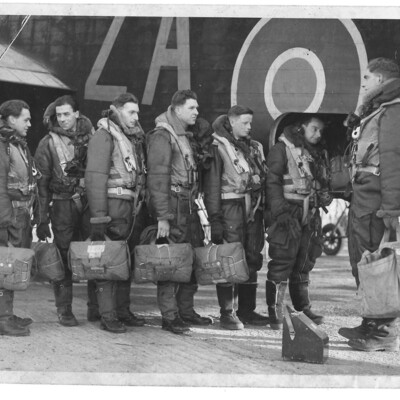 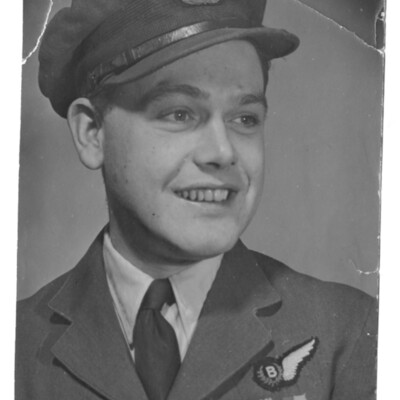 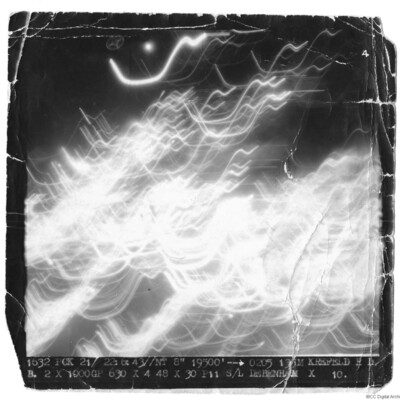 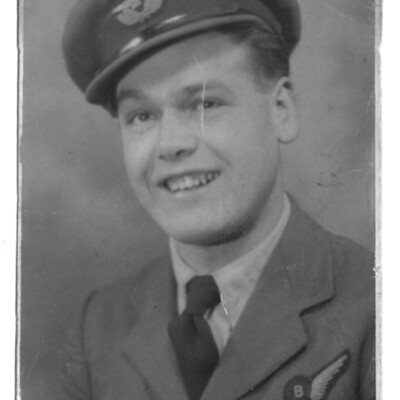 Formal portrait as an officer with bomb aimer brevet and DFM medal ribbon. 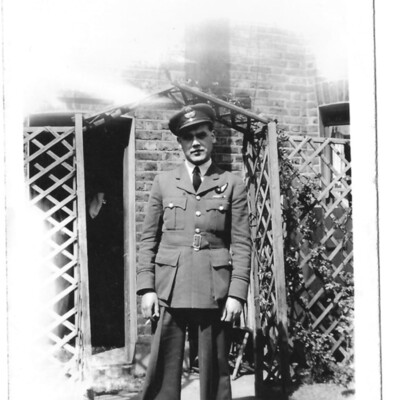 Ronald standing on the grass, trellis arch and open door in a house wall behind him. Bomb aimer brevet and flying officer rank braids. 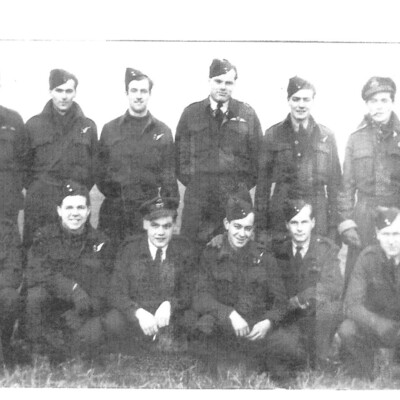 12 aircrew posed in two rows on a grass area. Ronald Carpenter third from left in front row.
Additional information about this item has been kindly provided by the donor. 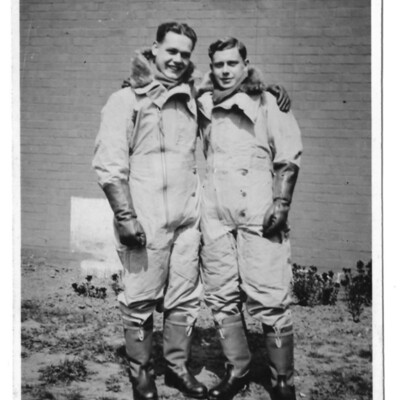 Ronald on the left with fellow aircrewman, both in flying gear. Brick building in background.
Additional information about this item has been kindly provided by the donor. 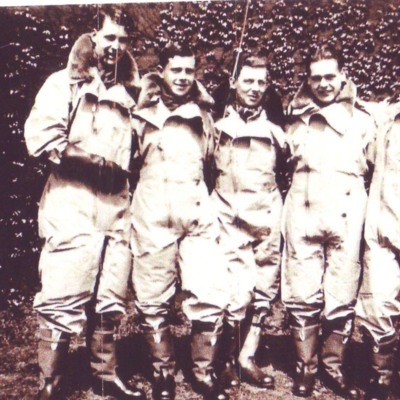 Five airmen in Sidcot suits. Ronald second from the right. 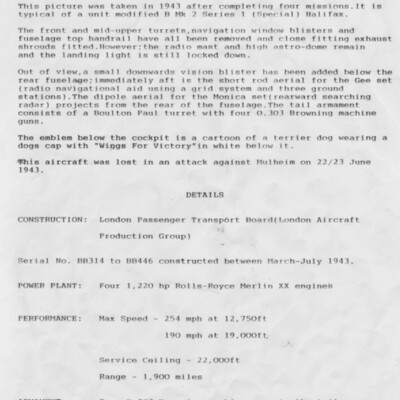 Series of six air to air views of Halifax Mk 2, serial BB 324, with squadron letters ZA-X, in various attitudes. Sometimes parts of the camera aircraft are visible. The following information was kindly supplied by the donor.…

Aircrew and ground crew with Halifax 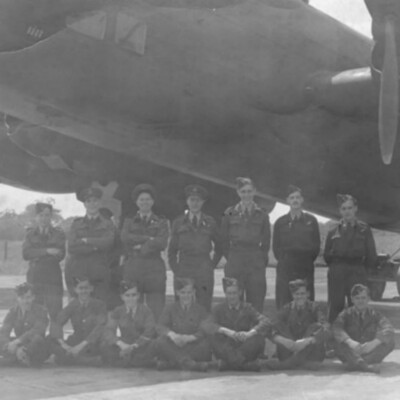 Bomb aimer in his position 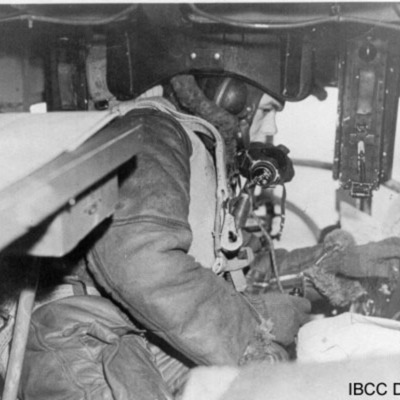 In full flying clothing surrounded by his equipment. 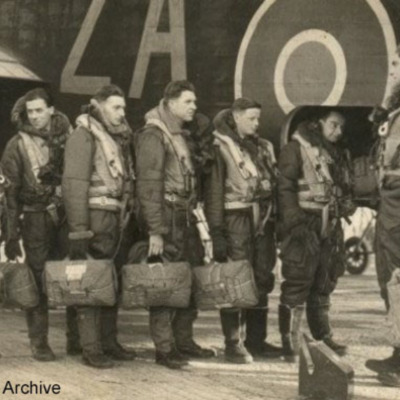