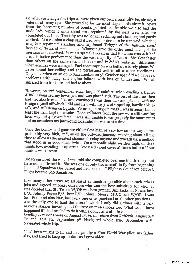 Writes of being given their own aircraft with nude lady nose art which survived the war. Mentions icing problem on operation to Saarbrücken. Describes operation to Frankfurt where engaged by Ju-88 where he injured his jaw. Writes that they learn as much about each others jobs as possible and mentions that he had to land his aircrfat three times and navigating for a whole trip. Recounts other operations to Kiel Canal and Aire when they hit downdraft which damaged their aircraft as well as landing back with bombs from Frankfurt and Saarbrücken. Continues with description of keeping lookout for enemy aircraft, flying clothing , escape equipment and crew activities on operations. Writes about ground crew and their activities and more about his actions and incidents during operations, including an airborne encounter with a B-17 and subsequent arrival of a bottle of Bourbon from the American crew. Concludes with other incidents and comments about operations.

So, after surviving a few trips we were given our own aircraft, UMF2, already a
veteran of many ops. She proved to be the most dependable aircraft. Apart
from the increasing number of bombs painted on the side we also had the
nude lady which I understand was repainted by the next crew after we
completed our tour. The lady was no longer reclining but standing and partly
clothed. At a reunion a chap said it had been ordered to be removed, which it
was, but repainted standing and captioned 'Frigger of the fighting sixes'
instead of 'Frigga of -----. Whoever gave the order must have got the
message as it survived. It was a special aircraft in that for some reason it had
a much better performance than the vast majority of Lancs. She flew faster
than others on the same revs and boost and it didn't make any difference
when engines were changed. Fuel consumption was better. A lovely plane. We
never found her ceiling and she performed well in all weather conditions.
Only once when on an op to Saarbrucken on 5th October 1944 did we have real
problems with icing and engine failure, with loss of all heating. We all
suffered from frostbite and had to abort.
However, on 12th September 1944, target Frankfurt, when evading a fighter
JU88. I smashed my lower jaw and was placed sick. The rest of the crew then
had two abortives and became convinced I was their luck and pleaded with me
to sign myself off which I did and flew with my jaw strapped up, hardly able to
talk, and still living on liquids. Wearing an oxygen mask I was in agony but at
least the pain kept me awake. Bone splinters from the jaw were still working
their way out 40 years later. I was still unable to eat properly for many years
and on occasions my jaw would lock solid for weeks at a time.
Once the bombs had gone we either flew high or very low on our way home,
preferably very high, and, as on the outward journey, weaving about all the
time to allow us the greatest chance of seeing anyone underneath us, a method
that stood us in good stead twice. On a moonlit night we flew high, on dark
nights low, avoiding lit up areas. We used cloud cover at times but not if our
shadow was thrown.
UMF2 survived the war. I was told she completed over one hundred ops but
have not confirmed it. She was one of only two aircraft to fly from beginning
to end of Squadron Ops period and had been on C Flight 12 Squadron before C
Flight became 626 Squadron.
Like many other crews we all learnt as much as possible about each others
jobs and agreed amongst ourselves who was the best substitute for who. It
was decided that Stu Tween W lOP was best gunner, Jim Jackson, N, was best
B/A, Johnny Payne B/A, best F/E, Johnny Moore, MU/G best W/OP. I was
best Pilot and also Nav, but every one of us practised at all other positions. I
was the only one to land the aircraft which I only did 3 times with a very
nervous skipper hovering and the rest on tenterhooks too. What would have
happened if I had needed to do it with a dodgy aircraft I have no idea.
Landing occasions were on August 1st, V2 on return from Rufforth, August 21st
F2 and 29th F2, September 9th Navigated whole trip, September 2nd,
Navigated whole trip.
I had been taught to fly and navigate by a First World War pilot, my father
also, and tried to keep up-to-date as I grew older.

On night ops we flew on the outside of the stream until 30 or 40 miles from
the target when we moved to the right track for bombing, trying to find a spot
with nobody above us. There is nothing more unsettling than being on the
point of dropping the bombs and seeing an aircraft immediately above you
with its bomb doors open with bombs still to be dropped. This happened
three times early in our tour. To see bombs falling in front and behind your
wing and tail tends to make you more cautious and think of a solution. We
flew on the edge and higher than the main stream which allowed us to dive
into the stream if attacked, which in fact got rid of the attacker every time.
On a cross country a Flying Fortress came close to us and indicated a race.
Tom opened up and we moved steadily ahead of him. After about 5 minutes
Tom throttled back. It came alongside again and to our surprise the pilot gave
us the 'V' sign and waved, then moved away. Two days later a jeep called at
the guardroom and left a 40 oz bottle of Bourbon 'for the guys who were flying
the Lancaster UMF with the naked babe on' three days before. How they
found out our station I have no idea. We never found where they were based.
Tom and I collected the bottle and gave each hod in the guardhouse a tot
before leaving. For several days we had personnel who didn't normally travel
around the station coming to look at the 'Babe' and the C.O. commented it was
probably in need of modification but as nobody had complained about it there
was no hurry. Later when there was a stand down, our crew and the ground
crew got together to finish the bottle off with a toast to all USA Forces,
especially USAAF.
On one other occasion, on our way home over the Kattegat, a twin engine
aircraft flew alongside us for 20 minutes, quite close, possibly a Mosquito but
no recognition was possible due to bad visibility. No attempt was made by it
that could have been considered hostile and we thought it was one of ours or
Swedish. One thing we did not do was fire, except in defence, which would
give away our position. I am convinced that some chaps fired at imaginary
aircraft and made themselves targets.


Getting caught in searchlights was always bad. If this happened the usual
evasive action was taken, plus Johnny Payne and I would throw out 'window'!
We had no idea if it helped but we evaded almost immediately every time.
Luck or not it seemed to work.
Air pressure at height reduces the higher you go and can cause some unusual
effects. Nitrogen bubbles in the blood can cause a sensation similar to
intoxication. Also releasing the ground pressure in a flask, particularly hot
beverages, causing the contents to expand and boil.