Personal Report No 7 on Operational Flight 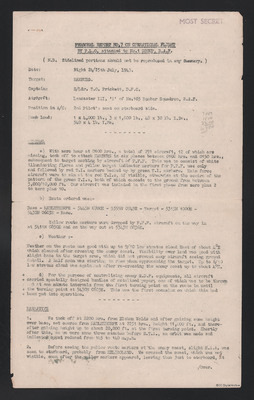 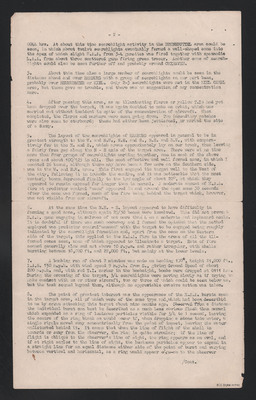 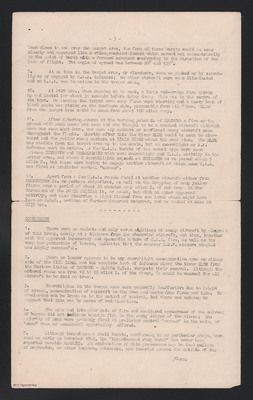 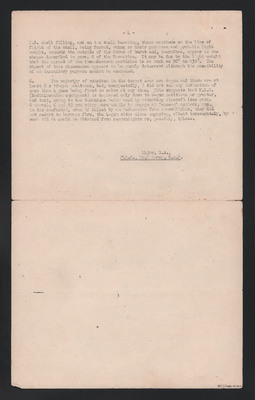 Personal Report No 7 on Operational Flight

A detailed report about a operation to Hamburg.

c) Weather:-
Weather on the route was good with up to 9/10 low stratus cloud East of about 4⁰E which cleared after crossing the enemy coast. Visibility over land was good with slight haze in the target area, which did not prevent many aircraft seeing ground detail. A half moon was starting to rise when approaching the target. Up to 6/10 low stratus cloud was again met after re-crossing the enemy coast up to about 4⁰E.

2. Before seeing the yellow route markers at the enemy coast, slight H.A.A. was seen to starboard, probably from HELIGOLAND. We crossed the coast which was not visible, soon after the yellow markers appeared, leaving them just to starboard at

/Over,
[page break]
-2-
0044 hrs. At about this time searchlight activity in the BRUNSBUTTEL area could be seen, in which about twelve searchlights eventually formed a well-shaped cone into the apex of which slight H.A.A. from 3-4 gunsites was fired together with spasmodic L.A.A. from about three scattered guns firing green tracer. Another cone of searchlights could also be seen further off and probably around CUXHAVEN.
3. About this time also a large number of searchlights could be seen in the distance ahead and over HAMBURG with a group of searchlights on our port beam, probably over NEUMINSTER or KIEL. Only 2-3 searchlights were met in the KIEL CANAL area, but these gave no trouble, and there was no suggestion of any concentration here.

4. After passing this area, as no illuminating flares or yellow T.Is had yet been dropped over the target, it was again decided to make an orbit, which was carried out without incident in spite of the concentration of aircraft. When completed, the flares and markers were seen going down. Two incendiary patches were also seen to starboard; these had either been jettisoned or marked the site of a dummy.

5. The layout of the searchlights of HAMBURG appeared in general to be in greatest strength to the W. and N.W., N.E. and E., S.E. and S.W., with comparatively few to the N. and S., which areas lay on our track, thus leaving a fairly free gap along the N – S axis of the target area. There were at no time more than four groups of searchlights working together, one in each of the above areas and about 100/125 in all. The most effective and well formed cone, in which I counted 26 beams, although there may have been a few more on the Southern side, was in the W. and N.W. area. This first engaged its target well to the West of the city, following it in towards the centre, and it was noticeable that the most Westerly beams depressed finally to the low angle of about 20⁰, at which they appeared to remain exposed for longer than is normal. A moderate amount of H.A.A. fire at predictor control “seen” appeared in and around the apex some 30 seconds after the cone was formed, much of the fire being buried behind the target, which, however, was not visible from our aircraft.

6. At the same time the N.E. – E. layout appeared to have difficulty in forming a good cone, although again 25/30 beams were involved. This did not prevent H.A.A. guns engaging in salvoes of not more than 4 on a moderate and haphazard scale. It is doubtful if there was much accuracy and I formed the opinion that the method employed was predictor control “unseen” with the target to be engaged being roughly indicated by the searchlight formation and, apart from the cone on the Western side of the target, this applied to the H.A.A. fire in the areas of the ill-formed cones seen, none of which appeared to illuminate a target. Rate of fire seemed generally slow and not above 10 r.p.m. and rather irregular, with shells bursting between 18,000ft. and 22,000 ft. but mainly at the lower levels.

7. A bombing run of about 2 minutes was made on heading 170⁰, height 21,000 ft., I.A.S. 150 m.p.h. with wind speed 9 m.p.h. from S., giving Ground Speed of about 200 m.p.h. and with red T.I. marker in the bombsight, bombs were dropped off at 0111 hrs. During the crossing of the target, ¾ searchlights were moving slowly as if trying to make contact with us or other aircraft, two or three of which could be seen below us, but the task seemed beyond them, although no appreciable evasive action was taken.

10. At 0109 hrs., when running up to bomb, a large red-orange fire sprang up and lasted for about 30 seconds before dying down; this was in the centre of the town. On leaving the target many fires were starting and a heavy bank of black smoke was rising on the Southern side, presumably from oil fires. Glow from the target area could be seen from about 100 miles away.

11. After altering course at the turning point S. of HAMBURG a fire on the ground with much smoke was seen and was thought to be a crashed aircraft although none was seen shot down, nor were any combats or confirmed enemy aircraft seen throughout the flight. Shortly after this the River Elbe could be seen to starboard and the yellow route markers at 5343N 0836E about the same time. The ELBE was visible from the target area up to its mouth, but no searchlight or A.A. defences were in action. A few H.A.A. bursts of the normal type were seen between CUXHAVEN and BREMERHAVEN with some searchlight and H.A.A. activity in the latter area, and about 8 searchlights exposed at CUXHAVEN as we passed about 5 miles S., but these were trying to engage another aircraft at which some H.A.A. was fired at predictor control “unseen”.

12. Apart from a few H.A.A. rounds fired at another aircraft either from SCHARNHORN Is or perhaps ship-fired, as well as the dropping of many yellow flares over a period of about 30 minutes many miles S. of our track in the direction of the DUTCH FRISIAN Is, or coast, but with no other apparent activity, also observing a light flashed from sea level whish might have been an S.O.S., nothing further of interest occurred, and we landed at base at 0335 hrs.

- - - - - - - - - - - - - - - - - - - - -
[underlined] CONCLUSION [/underlined]
1. There were no combats and only seven sightings of enemy aircraft of this Group, mostly at a distance from the observing aircraft, and this, together with the apparent inaccuracy and spasmodic nature of H.A.A. fire, as well as the very low percentage of losses, indicates that the counter R.D.F measure adopted was highly successful.

2. There no longer appears to be any searchlight concentration area on either side of the KIEL CANAL and the complete lack of defences along the River ELBE from the Western limits of HAMBURG – ALTONA G.D.A. suggests their removal. Although the ordered route was from 10 to 20 miles S. of the river, it would be unusual for all aircraft to be dead on track.

3. Searchlights in the target area were generally ineffective due to height of attack, concentration of aircraft in the area and smoke from fires and I.Bs. No conclusion can be drawn as to the method of control, but there was nothing to suggest that this was by means of radiolocation.

4. The slow and irregular rate of fire and scattered appearance of the salvoes of bursts did not indicate barrage fire in the early stages of the attack; the majority of guns were probably fired at predictor control “unseen” in the main, or “seen” when an occasional opportunity offered.

5. Although incandescent shell bursts, conforming to no particular shape, were seen as early as November 1942, the “incandescent ring burst” has never been reported outside HAMBURG. An explanation of this phenomenon may be that pellets of magnesium, or other luminous substance, are inserted outside of the

/Cont.
[page break]
-4-
H.E. shell filling, and on the shell bursting, these continue on the line of the flight of the shell, being forced, owing to their position and probable light weight, towards the outside of the force burst and, therefore, appear in the shapes described in para. 8 of the Narrative. It may be due to the light weight that the spread of the incandescent particles is as much as 90⁰ to 135⁰. The object of this phenomenon appears to be purely deterrent although the possibility of an incendiary purpose cannot be excluded.

6. The majority of gunsites in the target area are 6-gun and there are at least 6 x 12-gun positions, but, unexpectedly, I did not see any indication of more that 4 guns being fired in salvo at any time. This suggests that F.M.G. (Radiolocation equipment) is deployed only down to 6-gun positions or greater, and that, owing to the technique being used by the attacking aircraft (see para. d above), 6 and 12 gun sites were unable to engage at “unseen” methods, and, in the confusion, even if helped by an indication from searchlights, they did not resort to barrage fire, the 4-gun sites alone engaging, albeit inaccurately, by such aid as could be obtained from searchlights or, possibly, S/Locs.