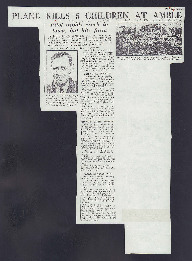 These report the crash of the Stirling where Ken was the sole surviving crew member, and five children were killed, on the 1 December 1943.

[Photograph]
The wreckage of Cliff House Farm near Amble, where five children were killed when a plane crashed into the house.

ALL five children of Mr. and Mrs. W. Robson, of Cliff House Farm, near Amble, were killed when a plane crashed into a small farmhouse late on Wednesday night, after the pilot had struggled to save his plane from coming down in the town.
One member of the aircraft’s crew survived.
The child victims were:-
Sylvia (9), Ethel (7), Margery (5), William (3), and Sheila (1 1/2).
The children were sleeping in upstairs rooms at the time of the crash, while Mr. and Mrs. Robson were entertaining friends, Mr. and Mrs. J. Rowell, of Pilston, Alston, in a room on the ground floor.
The four adults escaped with cuts and shock, but the children were killed instantaneously.

[Photograph]
MR. JAMES ROWELL, Amble butcher, who was visiting Cliff House Farm when a plane wrecked it. He saved one of the crew, whose clothing was ablaze, by rolling him on the ground and putting out the flames.

Fire broke out in the wreckage of the house and while the parents and their friends were making a frenzied search for the children Mrs. Rowell noticed an airman running round the field with his clothes ablaze.
She called her husband, who ran across, rolled the young airman on the ground, and then extinguished the flames. Then he rushed to the plane but could not find anyone.
Mr. and Mrs. Robson, Mr. and Mrs. Rowell, and the airman were taken to hospital and given treatment. Only the airman was detained.
Mr. Robson, who, with his wife, is staying at a nearby farm, told a “Newcastle Journal” representative: “It all happened so quickly that I know very little about it. One minute we were a happy little gathering, the next the place was a shambles.

“HOUSE CAME DOWN”
“While we were looking for the children fire broke out, then my neighbours came along to help and they were closely followed by the rescue squads. I must say that the rescue squads were soon on the scene.”
Mr. Rowell, who is a butcher in Amble, said he went to the Robsons to roll some bacon. “My wife and I go to the Robsons every Saturday night,” he said, “but as I had this little job to do, Mr. Robson suggested that I take my wife along for supper.
“We had just finished the meal when there was a deafening roar.
“I shouted ‘Look out’ and we all threw ourselves on to the floor. The house collapsed above our heads and looking upward we saw the sky.
“Mrs. Robson shouted ‘Oh, my poor bairns,’ and tried to make her way towards the stairs, which had been blown away.

“CHAIRS SMASHED”
“Our first thoughts, naturally, were for the children.
“We pulled at the wreckage in an effort to find them. Then fire broke out and we had to throw water to keep down the flames.
“The chairs we had been sitting on were smashed, and the walls in that part of the house are not more than three feet high now.”
Mr. and Mrs. Robson would have been in bed upstairs if they had not been visited by the Rowells.
Mr. Rowell has received a message of thanks from the medical officer at the aerodrome for saving the airman’s life.
The airman said that the plane had been having trouble, but the pilot managed to keep it in the air until it cleared the town. After that, however, he was unable to maintain control.

FIVE children aged from one to 11 were killed in their beds in an upstairs room when an aircraft on Wednesday night crashed into Cliffe House, a small farmhouse near Amble. One of the crew was saved.
The children were Sylvia Robson, nine; Ethel, seven; Marjorie, five; William Matthew, three; and Sheila, one.
They were in bed at the time following a party and their father and mother and two friends, Mr. and Mrs. J. Rowell, of Pilston, Amble, were injured, but not seriously.
The farmhouse is occupied by Mr. William Robson.
The Robsons were holding a party at their home at the time.

AIRMAN’S RESCUER
The Gazette was told yesterday that a member of the aircraft crew owes his life to the prompt action of an Amble butcher, Mr. James Rowell, of Dilston Terrace, whose wife was among the injured.
Mr. and Mrs. Rowell were among the guests having supper downstairs when the plane crashed into the house.
The machine at once took fire and flames spread to the house which was completely wrecked.
One of the guests dashed to the burning plane found the airman was still alive and ignoring the blazing wreckage and his own safety managed to extricate him from the machine.
The airman’s clothes were on fire and he succeeded in extinguishing the flames by rolling him on the ground.

Units of the N.F.S. and members of the Civil Defence service were rushed to the scene and the dead and injured moved to Amble by ambulance.
The injured were given treatment at a first aid post.
Mr. Rowell told the Alnwick Gazette yesterday, “My wife and I and Mr. and Mrs. Robson were having supper at the time of the crash. The five children were asleep in bed upstairs. We heard the plane coming in low but did not think anything of that at the moment. We next heard the machine hit a tree nearby. I do not remember what exactly happened afterwards because it all took place so quickly, but I heard someone shout “Lie down, lads.” We all dived for the floor and as we did so there was a terrific crash and debris began to fall among us. When I looked up again I could see the sky through the roof of the house. I heard explosions outside and I ran out to see one airman staggering across the field. His clothes were on fire and I helped him to put the flames out.”
Mr. Rowell added, “The plane simply tore the whole of the top of the house off and crashed through the bedroom. One of its huge wheels finished up in the sitting room. The scene outside at the time as the fire was raging was like daylight.”