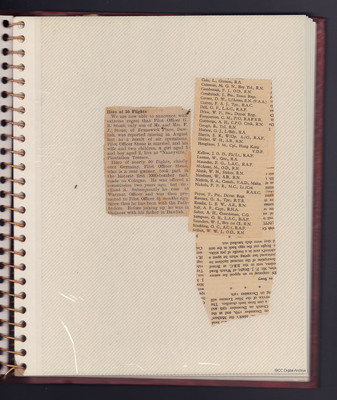 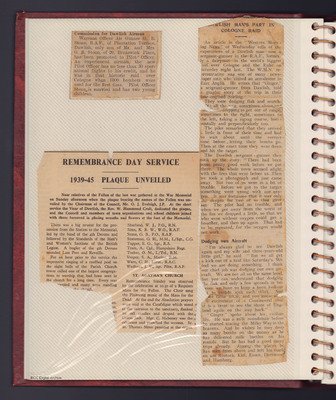 Five newspaper cuttings. The first refers to the death of George. The second is a list of names and which service they served in. Item 3 refers to George being promoted to Pilot Officer. Item 4 refers to a Remembrance Day service when a plaque was unveiled with a list of the fallen including George. Item 5 refers to an operation to Cologne that George participated in.

Hero of 50 Flights
We are now able to announce, with extreme regret that Pilot Officer G.B. Stone, only son of Mr. and Mrs. F.J. Stone, of Brunswick Place, Dawlish, was reported missing in August last as a result of air operations. Pilot Officer Stone is married, and his wife and two children, a girl aged 5 and boy aged 2, live at “Nancyville,” Plantation Terrace.
Hero of nearly 50 flights, chiefly over Germany, Pilot Officer Stone, who is a rear gunner, took part in the historic first 1000-bomber raid, made on Cologne. He was offered a commission two years ago, but declined it. Subsequently he rose to Warrant Officer and was then promoted to Pilot Officer 4 1/2 months ago. Since then he has been with the Pathfinders. Before joining up he was in business with his father in Dawlish.

Commission for Dawlish Airman
Warrant Officer Air Gunner G.B. Stone, R.A.F., of Plantation Terrace, Dawlish, only son of Mr. and Mrs. G.B. Stone, of 20, Brunswick Place, has been promoted to Pilot Officer. An experienced airman, the new Pilot Officer has no less than 30 operational flights to his credit, and he was in that historic raid over Cologne when 1000 bombers were used for the first time. Pilot Officer Stone is married and has two young children.

Near relatives of the Fallen of the last war gathered at the War Memorial on Sunday afternoon when the plaque bearing the names of the Fallen was unveiled by the Chairman of the Council, Mr. O.J. Eveleigh, J.P. At the short service the Vicar of Dawlish, the Rev. W. Hammond Croft, dedicated the plaque, and the Council and members of town organisations and school children joined with those bereaved in placing wreaths and flowers at the foot of the Memorial.

There was a big muster for the procession from the Station to the Memorial, led by the band of the 4th Devons and followed by the Standards of the Men’s and Women’s Sections of the British Legion. A bugler of the 4th Devons sounded Last Post and Reveille.
For an hour prior to the service the impressive ringing of a muffled peal on the eight bells of the Parish Church tower called one of the largest congregations to worship that had been seen in the church for a long time. Every seat [missing word and letters]upied and many were standing [missing words and letters]rch.

ST. AGATHA’S CHURCH
Remembrance Sunday was observed by the celebration at 10.30 of a Requiem Mass for the Fallen. The Choir sang the Plainsong music of the Mass for the Dead. At the end the Absolution prayers were said at the Catafalque which stood at the entrance to the sanctuary, flanked by tall candles and drapes with the Union Jack, Mgr. C. Mahoney was the celebrant and preached the sermon. Sr. St. Thomas More presided at the organ.

An article in the “Western Morning News” of Wednesday tells of the experiences of a Dawlish man – now a sergeant-gunner in the R.A.F., formerly a dairyman – in the world’s biggest raid over Cologne and the Ruhr on Saturday night last. The W.M.N. representative was one of many newspaper men who visited an aerodrome in East Anglia. He writes that “Ginger,” a sergeant-gunner from Dawlish, told a graphic story of the trip in their four-engined Stirling.
They were dodging flak and search-[missing word] all the way, sometimes above and [missing words] dropping to get out of range, sometimes to the right, sometimes to the left, taking a zigzag course, horizontally and perpendicularly too.
The pilot remarked that they arrived a little in front of their time and had to wait about until the correct time before letting their bombs go. Then at the exact time they went down and hit the target.
The Dawlish sergeant-gunner then took up the story: “There had been some pretty good work before we got there. The whole town seemed alight with the fires that went before us. Then we took a photograph and just came away. But two of us were in a bit of trouble. Before we got to the target something went wrong with our oxygen. It was fortunate that it was only the oxygen for two of us that gave out. The pilot had no trouble, and when we got away from the worst of the fire we dropped a little, so that we who were without oxygen could get a breather, and then up again. That has to be repeated, for the oxygen would not work.

Dodging own Aircraft
“I’m always glad to see Dawlish again and my wife and three-years-old little girl,” he said. “But we all get a kick out of a raid like Saturday’s. We feel we are doing something. I think our chief job was dodging our own aircraft. We are not all on the same level, but you can understand that dodging the flak and only a few seconds in between we have to keep a keen lookout [missing letters]t to collide with each other. And [missing words] came home, and you know [missing words] excitement of a Continental visit it is a treat to see the shore of England again on the way back.”
“Ginger” spoke about his civilian life. He was a milk roundsman before he started tracing the Milky Way in the heavens. And he wishes he may drop as many bombs on the enemy as he has delivered milk bottles on his rounds. But he has had a good many trips already. Among the places he has seen from above and left his mark on are Rostock, Kiel, Essen, Dortmund and Hamburg.