Letter to his Family from Alan Green 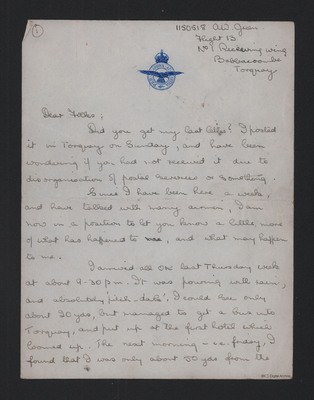 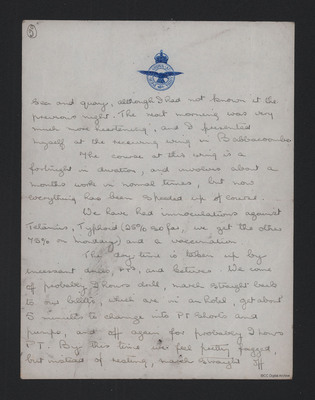 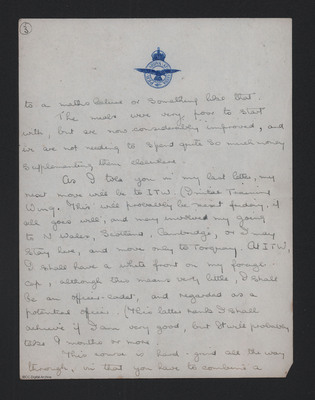 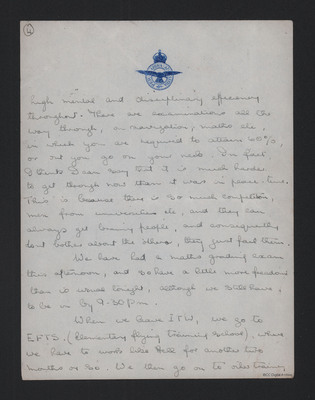 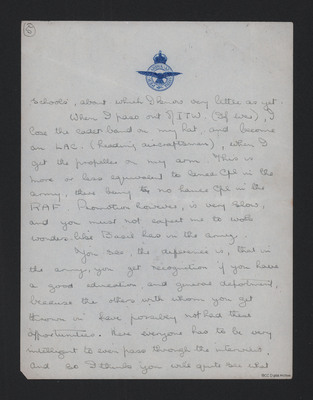 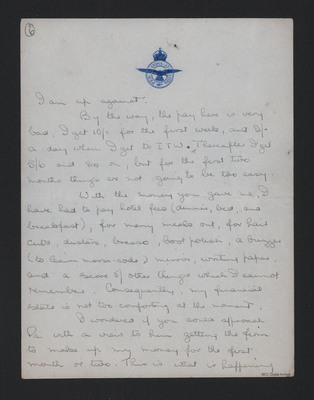 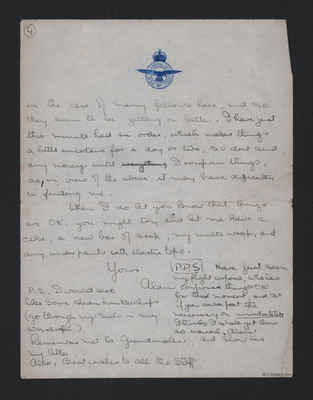 Letter to his Family from Alan Green

Alan writes from Torquay during his training. He had just arrived in pitch black then the next day turned up at the receiving unit. There are lectures and physical training. He will then move to an Initial Training Wing in about a week. Then he describes the next stages of his training.

Dear Folks,
Did you get my last letter? I posted it in Torquay on Sunday, and have been wondering if you had not received it due to disorganisation of postal services or something.

Since I have been here a week, and have talked with many airmen, I am now in a position to let you know a little more of what has happened to me, and what may happen to me.

I arrived all OK last Thursday week at about 9-30 pm. It was pouring with rain, and absolutely 'pitch-dark'. I could see only about 20 yds, but managed to get a bus into Torquay, and put up at the first hotel which loomed up. The next morning – ie Friday, I found that I was only about 50 yds from the

sea and quay, although I had not known it the previous night. The next morning was very much more heartening, and I presented myself at the receiving wing in Babbacoombe. [sic]

The course at this wing is a fortnight in duration, and involves about a months work in normal times, but now everything has been speeded up of course.

We have had inoculations against Tetanus, Typhoid (25% so far, we get the other 75% on Monday) and a vaccination.

The meals were very poor to start with, but are now considerably improved, and we are not needing to spend quite so much money supplementing them elsewhere.

As I told you in my last letter, my next move will be to ITW. (Initial Training Wing.) This will probably be next friday, [sic] if all goes well, and may involve my going to N. Wales, Scotland, Cambridge, or I may stay here, and move only to Torquay. At ITW, I shall have a white front on my forage cap, although this means very little, I shall be an officer-cadet, and regarded as a potential officer. (This latter rank I shall achieve if I am very good, but it will probably take 9 months or more.

This course is hard-grind all the way through, in that you have to combine a

high mental and disciplinary efficiency throughout. There are examinations all the way through, on navigation, maths etc, in which you are required to attain 60% or out you go on your heels. In fact, I think I can say that it is much harder to get through now than it was in peace time. This is because there is so much competition, men from universities etc, and they can always get brainy people, and consequently don't bother about the others, they just fail them.

We have had a maths grading exam this afternoon, and so have a little more freedom than is usual tonight, although we still have to be in by 9-30 pm.

When we leave ITW, we go to EFTS. (Elementary flying training school), where we have to work like hell for another two months or so. We then go on to other training

schools, about which I know very little as yet.

When I pass out of ITW (if ever), I lose the cadet band on my hat, and become an LAC. (Leading aircraftsman), when I get the propeller on my arm. This is more or less equivalent to lance Cpl in the army, there being no Lance Cpl in the RAF. Promotion however, is very slow, and you must not expect me to work wonders like Basil has in the army.

You see the difference is, that in the army,you get recognition if you have a good education, and general deportment, because the others with whom you get thrown in have possibly not had these opportunities. Here everyone has to be very intelligent to even pass through the interview, and so I think you will quite see what

I am up against.

With the money you gave me, I have had to pay hotel fees (dinner, bed, and breakfast), for may meals out, for hair cuts, dusters, brasso, boot polish, a buzzer (to learn morse-code) mirror, writing paper, and a score of other things which I cannot remember. Consequently, my financial state is not too comforting at the moment.

I wondered if you could approach Pa with a view to him getting the firm to make up my money for the first month or two. This what is happening

7
in the case of many fellows here, and so they seem to be getting on better. I have just this minute had an order, which makes things a little uncertain for a day or two, so don't send any money until [deleted] everything [/deleted] I confirm things, as, in view of the above, it may have difficulty in finding me.

When I do let you know that things are OK, you might try and let me have a cake, a new bar of soap, my multi wrap, and any underpants with elastic tops.

P.S. I would also like some clean handkerchiefs (go through my suits in my wardrobe.) Remember me to Grandmother, and show her my letter. Also, Best wishes to all the staff.

P.P.S Have just seen my flight corporal, who has confirmed things OK for the moment, and so if you could post the necessary on [underlined] immediately [/underlined] I think I shall get them as usual. Alan.