Letter to Alan Green from his mother 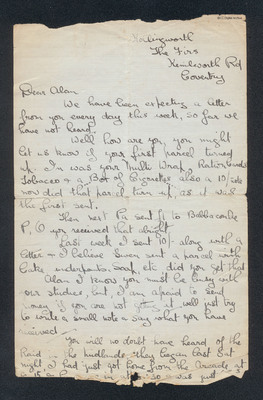 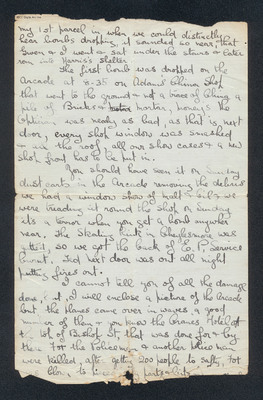 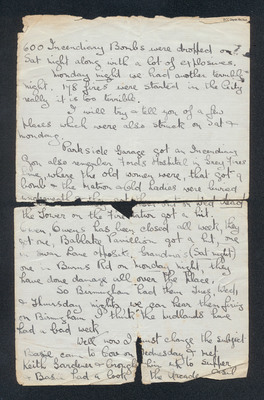 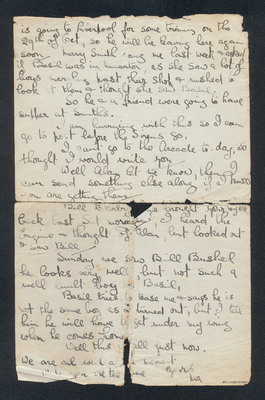 Letter to Alan Green from his mother

She has not received any recent letter from Alan. She asks if he received a parcel from her and another from Gwen. She describes in detail the bombing close by. Then she tells Alan of family friends she has met.

We have been expecting a letter from you every day this week, so far we have not heard.

Well how are you, you might let us know if your first parcel turned up. In was your Multi Wrap, Ration Cards, Tobacco & a Box of Cigarettes also a 10/- note how did that parcel turn up, as it was the first sent.

Then next Pa sent £1 to Babbacombe P.O. you received that alright.

Last week I sent 10/- along with a letter – I believe Gwen sent a parcel with cake, underpants, soap, etc, did you get that.

Alan I know you must be busy with your studies, but, I am afraid to send money if you are not getting it – well just try to write a small note & say what you have received.

You will no doubt have heard of the Raid in the midlands, they began last Sat night, I had just got home from the Arcade at [indecipherable words]

my 1st parcel in when we could distinctly hear bombs dropping, it sounded so near, that Gwen & I went & sat under the stairs & later ran into Harris’s shelter.

The first bomb was dropped on the Arcade at 8-35 on Adam’s China Shop that went to the ground & not a trace of China a pile of Bricks & mortar, Money’s the Optician was nearly as bad, as that is next door, every shop window was smashed & all the roof, all our show cases & a new shop front has to be put in.

You should have seen it on Sunday dust carts in the Arcade removing the debris we had a window show of malt & oils, we were treading it round the shop on Sunday its a terror when you get a bomb anywhere near. The Skating Rink in Cheylesmore was gutted, so we got the back of E.P. Service burnt. Ted next door was out all night putting fires out.

I cannot tell you of all the damage done, but, I will enclose a picture of the Arcade but the planes came over in waves, a good number of the & you know the Cranes Hotel at the top of Bishop St, that was done for & by there got the Policeman & another policeman were killed, after getting 200 people to safty [sic], got [indecipherable word] blown to pieces [indecipherable words}

600 Incendiary Bombs were dropped on Sat night along with a lot of explosives.

[underlined] Monday Night [/underlined] we had another terrible night. 178 fires were started in the City really it is too terrible.

I will try & tell you of a few places which were also struck on Sat & Monday.

Parkside Garage got an Incendiary. You also remember Fords Hospital in Grey Fires Lane, where the old women were, that got a bomb & the Matron & Old Ladies were buried underneath & they got them out on Wed [underlined] dead [/underlined] the Tower on the Fire station got a hit.

Owen, Owens has been closed all week, they got one, Bablake Pavillion [sic] got a hit, one in Swan Lane opposite Grandma’s (Sat night) one in Bruns Rd on Monday night, they have done damage all over the place.

So Birmingham had them Tues, Wed, & Thursday nights, we can hear them firing on Birmingham I think the Midlands have had a bad week.

Well now I must change the subject Basil came to Cov on Wednesday & met Keith Gardener & brought him up to supper & Basil had a look at the Arcade. Basil

is going to Liverpool for some training on the 29th of Oct, so he will be leaving here again soon. Mary Smith rang me last week & asked if Basil was in Nuneaton, as she saw a lot of boys marching past their shop & rushed to look at them & thought she saw Basil.

So he & a friend were going to have supper at Smiths.

I am hurrying with this so I can go to post before the Sirens go.

I Cant go to the Arcade to-day, so thought I would write you.

Well Alan let me know, then I can send something else along if I know you are getting them.

Sunday we saw Bill Bushel he looks very well, but not such a well built boy as Basil.

Basil tries to tease me & says he is not the same boy as it turned out, but I tell him he will have to get under my wing when he comes home.

Well this is all just now.

We are all well at the moment, I hope you are the same.