First airman to travel via Comète 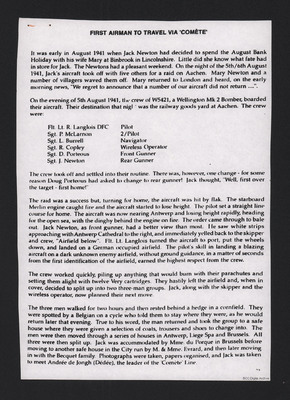 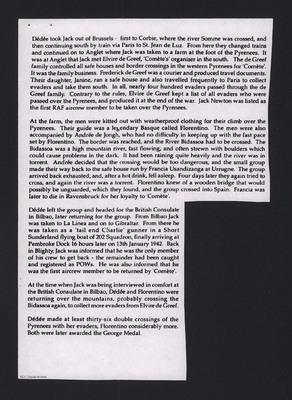 First airman to travel via Comète

Describes events leading up to and including Jack Newton's last operation before crash landing in Belgium. Lists his crew and gives account of their attempts at evasion, meeting with Belgian helpers, moving to various safe houses and Jack Newton's journey through France, the Pyrenees, Spain, Gibraltar and back to England.

FIRST AIRMAN TO TRAVEL VIA 'COMÈTE'

It was early in August 1941 when Jack Newton had decided to spend the August Bank Holiday with his wife Mary at Binbrook in Lincolnshire. Little did she know what fate had in store for Jack. The Newtons had a pleasant weekend. On the night of the 5th/6th August 1941, Jack's aircraft took off with five others for a raid on Aachen. Mary Newton and a number of villagers waved them off. Mary returned to London and heard, on the early morning news, "We regret to announce that a number of our aircraft did not return ....".

On the evening of 5th August 1941, the crew of W5421, a Wellington Mk 2 Bomber, boarded their aircraft. Their destination that nigl [sic] ' was the railway goods yard at Aachen. The crew were:

The crew took off and settled into their routine. There was, however, one change -for same reason Doug Porteous had asked to change to rear gunner! Jack thought, "Well, first over the target - first home!"

The raid was a success but, turning for home, the aircraft was hit by flak. The starboard Merlin engine caught fire and the aircraft started to lose height. The pilot set a straight line course for home. The aircraft was now nearing Antwerp and losing height rapidly, heading for the open sea, with the dinghy behind the engine on fire. The order came through to bale out. Jack Newton, as front gunner, had a better view than most. He saw white strips approaching withAntwerp [sic] Cathedral to the right, and immediately yelled back to the skipper and crew, "Airfield below". Flt. Lt. Langlois turned the aircraft to port, put the wheels down, and landed on a German occupied airfield. The pilot's skill in landing a blazing aircraft on a dark unknown enemy airfield, without ground guidance, in a matter of seconds from the first identification of the airfield, earned the highest respect from the crew.

The crew worked quickly, piling up anything that would burn with their parachutes and setting them alight with twelve Very cartridges. They hastily left the airfield and, when in cover, decided to split up into two three-man groups. Jack, along with the skipper and the wireless operator, now planned their next move.

The three men walked for two hours and then rested behind a hedge in a cornfield. They were spotted by a Belgian on a cycle who told them to stay where they were, as he would return later that evening. True to his word, the man returned and took the group to a safe house where they were given a selection of coats, trousers and shoes to change into. The men were then moved through a series of houses in Antwerp, Liege Spa and Brussels. All three were then split up. Jack was accommodated by Mme. du Porque in Brussels before moving to another safe house in the City run by M. & Mme. Evrard, and then later moving in with the Becquet family. Photographs were taken, papers organised, and Jack was taken to meet Andrée de Jongh (Dédée), the leader of the 'Comète' Line.

Dédée took Jack out of Brussels - first to Corbie, where the river Somme was crossed, and then continuing south by train via Paris to St. Jean de Luz. From here they changed trains and continued on to Anglet where Jack was taken to a farm at the foot of the Pyrenees. It was at Anglet that Jack met Elvire de Greef, 'Comète's' organiser in the south. The de Greef family controlled all safe houses and border crossings in the western Pyrenees for 'Comète'. It was the family business. Frederick de Greef was a courier and produced travel documents. Their daughter, Janine, ran a safe house and also travelled frequently to Paris to collect evaders and take them south. In all, nearly four hundred evaders passed through the de Greef family. Contrary to the rules, Elvire de Greef kept a list of all evaders who were passed over the Pyrenees, and produced it at the end of the war. Jack Newton was listed as the first RAF aircrew member to be taken over the Pyrenees.

At the farm, the men were kitted out with weatherproof clothing for their climb over the Pyrenees. Their guide was a legendary Basque called Florentino. The men were also accompanied by Andrée de Jongh, who had no difficulty in keeping up with the fast pace set by Florentino. The border was reached, and the River Bidassoa had to be crossed. The Bidassoa was a high mountain river, fast flowing, and often strewn with boulders which could cause problems in the dark. It had been raining quite heavily and the river was in torrent. Andrée decided that the crossing would be too dangerous, and the small group made their way back to the safe house run by Francia Usandizanga at Urrugne. The group arrived back exhausted, and, after a hot drink, fell asleep. Four days later they again tried to cross, and again the river was a torrent. Florentino knew of a wooden bridge that would possibly be unguarded, which they found, and the group crossed into Spain. Francia was later to die in Ravensbruck for her loyalty to 'Comète'.

Dédée left the group and headed for the British Consulate in Bilbao, later returning for the group. From Bilbao Jack was taken to La Linea and on to Gibraltar. From there he was taken as a 'tail end Charlie' gunner in a Short Sunderland flying boat of 202 Squadron, finally arriving at Pembroke Dock 16 hours later on 13th January 1942. Back in Blighty, Jack was informed that he was the only member of his crew to get back - the remainder had been caught and registered as POWs. He was also informed that he was the first aircrew member to be returned by 'Comète'.

At the time when Jack was being interviewed in comfort at the British Consulate in Bilbao, Dédée and Florentino were returning over the mountains, probably crossing the Bidassoa again, to collect more evaders from Elvire de Greef.

Dédée made at least thirty-six double crossings of the Pyrenees with her evaders, Florentino considerably more. Both were later awarded the George Medal.