83 items. Collection concerns Flight Lieutenant Jack Newton (742570 Royal Air Force) who was a Sergeant air gunner on Wellington of 12 Squadron. His aircraft was landed on fire at a German occupied airfield in Antwerp in August 1941. He was the first airman to escape back to England via the Comète escape line. The rest of his crew were captured and made prisoners of war. The collection contains accounts of his escape, letters of research from Belgium helper, other official correspondence from the Red Cross and the Royal Air Force, photographs of places and people, newspaper cuttings propaganda leaflets and maps of airfield and escape route. In addition there is an interview with Jack Newton about his experiences in the wartime RAF.

The collection has been donated to the IBCC Digital Archive by Jackie Bradford and catalogued by Nigel Huckins. 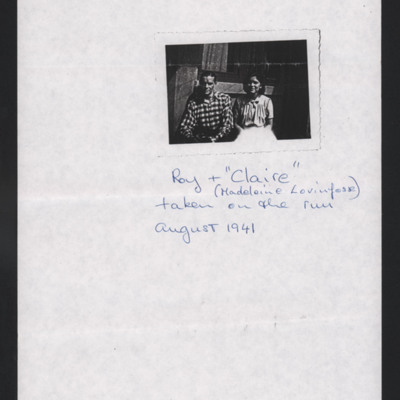 Half length view of a man wearing checked shirt and a woman sitting side by side on a bench. Captioned 'Roy and "Claire" (Madeleine Lovinfiosse) taken on the run August 1941'. 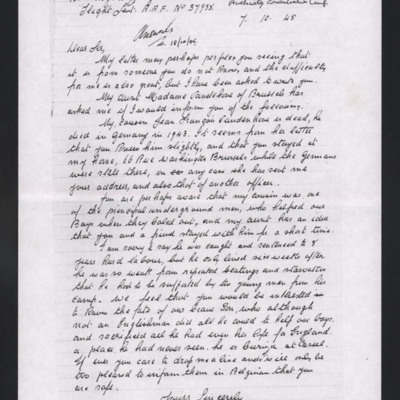 Note (Roy's) at top about people being captured and held in Gestapo jail and died in Auschwitz. Letter from someone unknown to Langlois on behalf of his aunt about a person he met while evading in Belgium who was caught and tortured and subsequently…

Jack Newton joined the RAF in 1938. He trained as an air gunner and was posted to 12 Squadron at RAF Binbrook. Just before midnight on the 5th of August 1941 Jack and his crew set off for Cologne. They were attacked by a night fighter. One engine was… 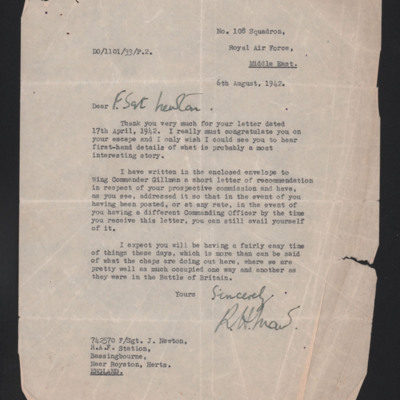 Thanks him for letter and congratulates him on his escape. Encloses a letter of recommendation for Jack's commission. Mentions that he is very busy in the Middle East. 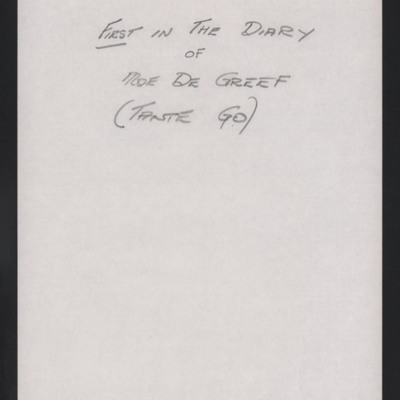 First in the diary of Mde De Greef (Tante Go) 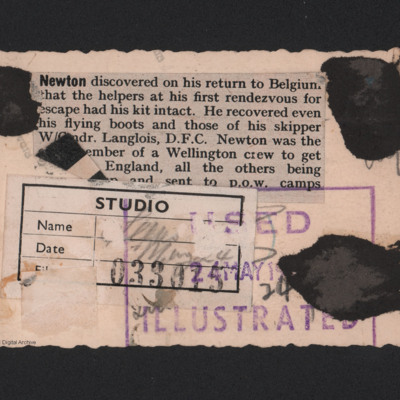 Reports that helpers at his first rendezvous had retained Jack Newton's kit. On his return to Belgium he recovered his flying boots and other crew's equipment. 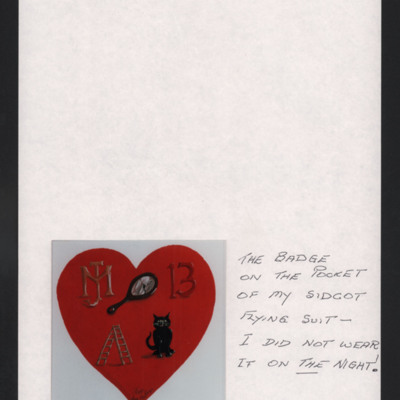 Heart shaped badge with initials MJ, a mirror, the number 13, a step ladder and a black cat. Captioned 'The badge on the pocket of my Sidcot flying suit - I did not wear it on the night'. 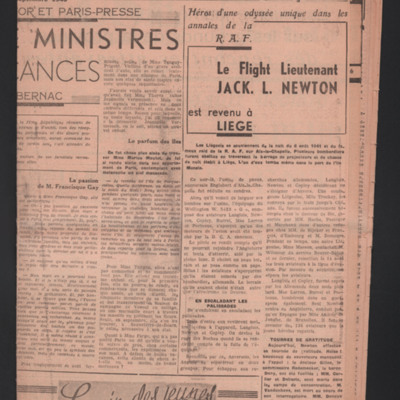 Article about Jack Newton, their Wellington's landing on fire in Antwerp and his subsequent escape with help from Belgian citizens. Confirms information in their previous telegram that her husband is now reported interned from air attaché Madrid. He had arrived in Madrid. 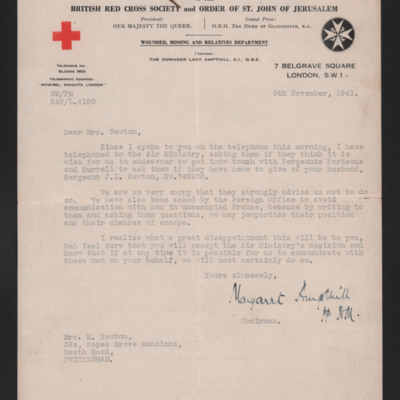 Writes that they had been advised by the air ministry not to try and contact two other members of her husband's crew in France to get information about her husband. Contract might jeopardize their position and chances to escape. Informs her that they had heard nothing further of her husband. 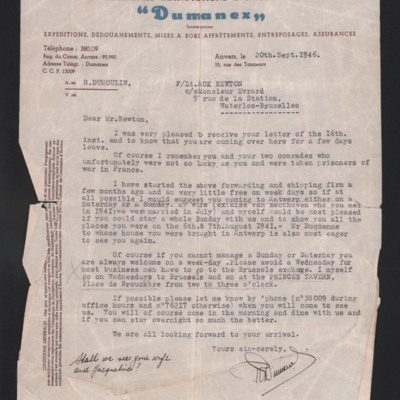 Letter looking forward to Jack's visit. Remembers him and other members of his crew. Makes various arrangements to meet when Jack comes to Antwerp.

Letter to Jack Newton's wife from the air ministry 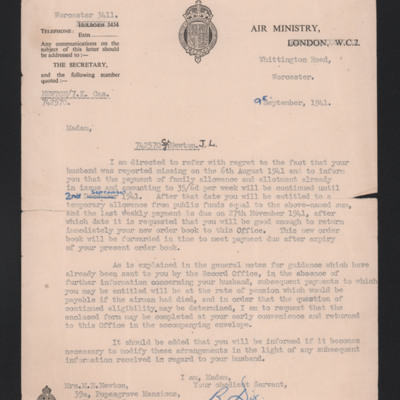 Refers to the fact that her husband had been reported missing on 6 August 1941 and that family allowance and allotment would continue until 2 September and that temporary allowance would be paid until 27 November 1941. Continues with pension… 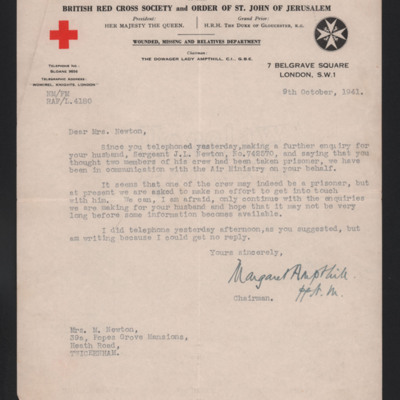 Informs her that one member of his crew was a prisoner of war but asked that she make no effort to contact him. They were continuing to make enquiries about her husband. 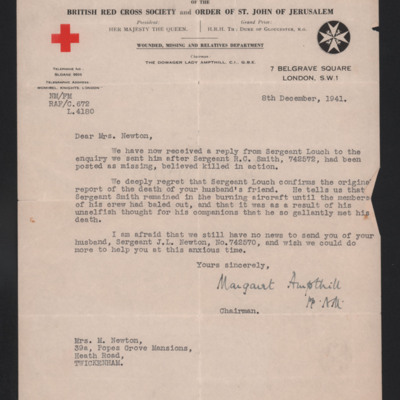 Confirms that a friend of her husband who she had enquired after had indeed been killed in action. In addition there was still no news of her husband,

Letter through the Belgian Red Cross 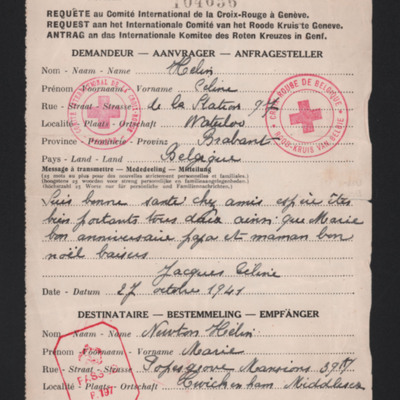 Letter to Jack Newton's wife from the Red Cross 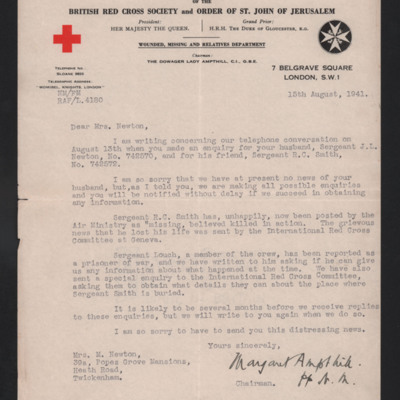 Writes they are sorry that there was no news of her husband. Other aircrew that she had enquired of were reported as killed in action and another as prisoner of war. 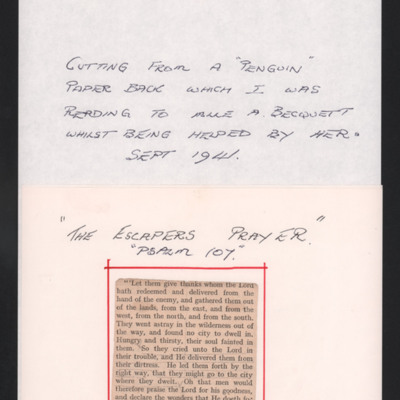 Cutting with prayer from Psalm 107. Captioned 'Cutting from Penguin paperback which I was reading to Mlle A Becquett whilst being helped by her, Sept 1941'. 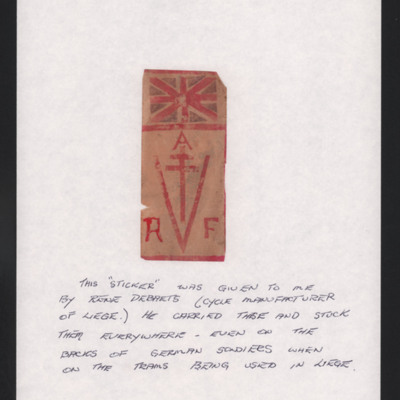 Sticker with union flag at the top, the letters RAF surrounding a large V cross of Lorraine inside it. 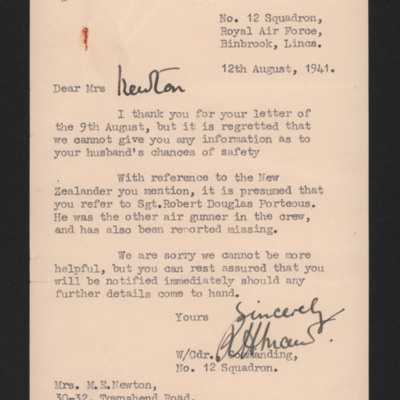 From officer commanding 12 Squadron regretting that they could not give and information on her husbands chances of safety. Also unable to give any information on other crew members. 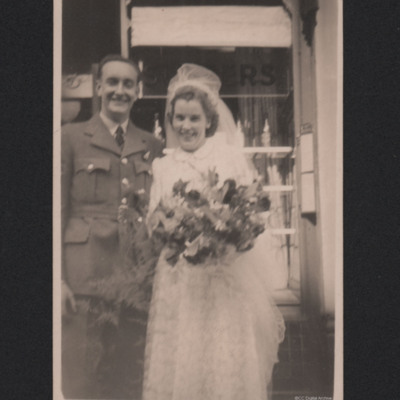 A man wearing RAF uniform tunic with half brevet is standing next to a woman wearing wedding dress and holding a bouquet. In the background a window. 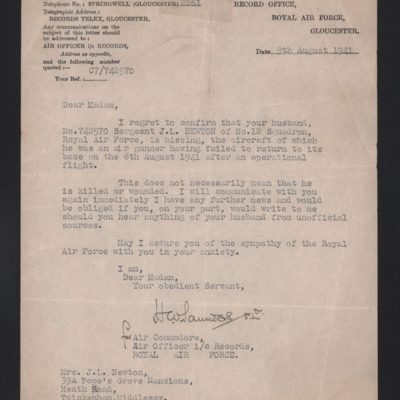 Informs her that her husband's aircraft was missing as his aircraft failed to return to base on 6 August 1941. 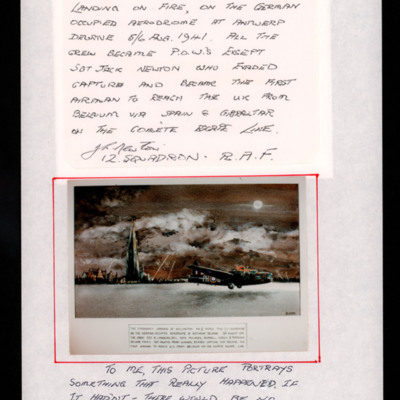 Gives account of event when Wellington W5421 of 12 Squadron landed on fire at Antwerp Deurne on 5/6 August 1941. Notes that all crew except Jack Newton became prisoners of war He became the first airman to reach UK using the Comète escape line.… 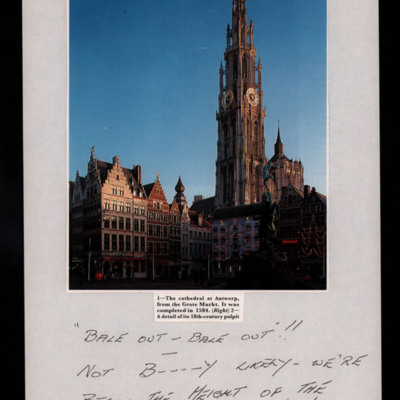 Cathedral spire surrounded by multistorey buildings around the grand market square. Captioned 'Bale out - bale out!!. Not b----y likely, we're below the height of the cathedral!!!'.
View all 83 items