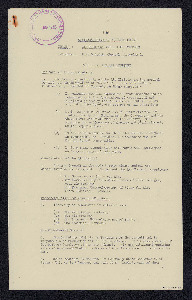 Covers the work of the air ministry, constitution of the air council, responsibilities of members of the council, the ministerial members, the air members, the permanent under-secretary of state (PUS), general observation on the on the department of the PUS, additional members. In part two covers the function and organisation of bomber command, fighter command, coastal command, tactical air forces. flying training command, transport command, maintenance command and overseas command.