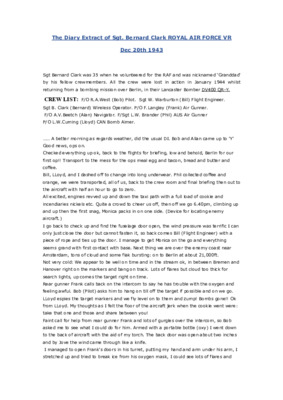 Transcript of diary entry for 20 December 1943. Includes crew list. Account of their first operation to Berlin on. He was wireless operator. Mentions anti-aircraft fire over coast, problems with Monica system, problems with oxygen, problems with rear turret and gunner and return to base. Concludes with list of operations in January 1944, the last of which they failed to return from.

…… A better morning as regards weather, did the usual DI. Bob and Allan came up to 'Y' Good news, ops on.
Checked everything up ok, back to the flights for briefing, low and behold, Berlin for our first op!! Transport to the mess for the ops meal egg and bacon, bread and butter and coffee.
Bill, LLoyd, and I dashed off to change into long underwear. Phil collected coffee and orange, we were transported, all of us, back to the crew room and final briefing then out to the aircraft with half an hour to go to zero.
All excited, engines revved up and down the taxi path with a full load of cookie and incendiaries nickels etc. Quite a crowd to cheer us off, then off we go 6.40pm, climbing up and up then the first snag, Monica packs in on one side. (Device for locating enemy aircraft.)
I go back to check up and find the fuselage door open, the wind pressure was terrific I can only just close the door but cannot fasten it, so back comes Bill (Flight Engineer) with a piece of rope and ties up the door. I manage to get Monica on the go and everything seems grand with first contact with base. Next thing we are over the enemy coast near Amsterdam, tons of cloud and some flak bursting: on to Berlin at about 21,000ft.
Not very cold: We appear to be well on time and in the stream ok, in between Bremen and Hanover right on the markers and bang on track. Lots of flares but cloud too thick for search lights, up comes the target right on time.
Rear gunner Frank calls back on the intercom to say he has trouble with the oxygen and feeling awful. Bob (Pilot) asks him to hang on till off the target if possible and on we go. LLoyd espies the target markers and we fly level on to them and zump! Bombs gone!! Ok from LLoyd. My thoughts as I felt the floor of the aircraft jerk when the cookie went were: take that one and those and share between you!
Faint call for help from rear gunner Frank and lots of gurgles over the intercom, so Bob asked me to see what I could do for him. Armed with a portable bottle (oxy) I went down to the back of aircraft with the aid of my torch. The back door was open about two inches and by Jove the wind came through like a knife.
I managed to open Frank's doors in his turret, putting my hand and arm under his arm, I stretched up and tried to break ice from his oxygen mask, I could see lots of flares and

lights outside: talk about November 5th!! Just then some tracer shot by us below and behind (luckily.) Frank, although almost out, turned his turret in the direction of the tracer on the port beam, so I was trapped by my arm in between the turret and the rear of the fuselage. I felt scared because I only had 2 minutes left in my oxygen bottle.
I struggled out after what seemed to be ages and then I dropped my torch and lost it, making matters worse.
After what seemed an age I plugged my oxygen tube into the elsan spare and recovered my breath a bit, it was hellish cold although it was only 25 degrees below on the gauge.
I struggled back to my place forward and told Bob how hopeless things were with Frank (we were still well in the flack and flares area in fact a flare just whizzed by our tail, a near thing for us)


Bob gave me a long oxygen tube (spare) and taking two or three portable bottles and another torch I went down to see Frank, he was just all out, I got his doors open again and pulled him flat on his back on the wooden plank (from his turret to the tail cross-member) then I pulled his oxygen mask off and plugged the spare one on to the elsan oxygen point and popped the new mask on his face. After about 5 or 6 minutes he began to flicker his eyes about and try to sit up, but I made him lay still and told him to take his time then get back into his turret leaving the door open, still using the spare mask.
I then went up to the front and started to work again. All this time we were getting away from Berlin and just missed Rostock and on to Denmark, across Denmark and out over the North Sea with lots of flack on the Danish coast. Although Bob had come down several thousand feet to help Frank, we dived through the barrage ok.
Frank gradually got back to normal except his electrical suit did not work and he was very cold: we carried on until we got just off the coast nr Cromer. The cloud only 700 ft high so we kept on until we got back to base.
Base Gave us no 7 position and in we came to make a wizard landing about 12.39 midnight. The ground crew cheered us in and we soon got down to breakfast after interrogation, we eventually got into bed at 2.45 am.
So ended our first operational trip, Bob had already had his baptism of fire before at Leipzig. Glad to say Frank soon felt better; but was quite sick due to rushing about, I think without oxygen etc.