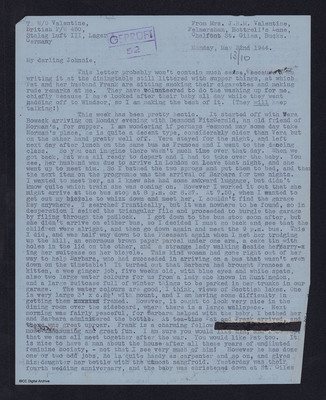 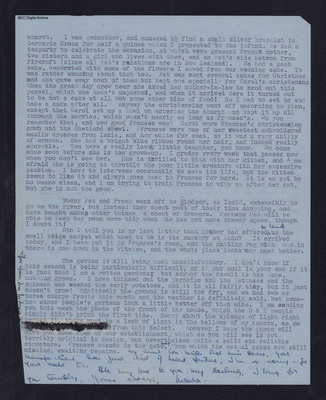 Writes of daily activities involving lodger going off to meet husband leaving baby with Ursula as well as talk of other visitors including her sister. Continues with description of other activities and catches up with family gossip. Concludes with lament over unsuccessful gardening efforts.

This letter probably won’t contain much sense, because I am writing it at the diningtable still littered with supper things, at which Pat and her husband Frank are sitting smoking their cigarettes and making rude remarks at me. They have volunteered to do the washing up for me, chiefly because I have looked after their baby all day while they went gadding off to Windsor, so I am making the best of it. (They [underlined] will [/underlined] keep talking!)

This week has been pretty hectic. It started off with Vera Bowack arriving on Monday evening with Desmond FitzGerald, an old friend of Norman’s, for supper. I am wondering if perhaps Desmond may some day take Norman’s place, he is quite a decent type, considerably older than Vera but on the other hand pretty well off. Vera stayed for the night, and left next day after lunch on the same bus as Frances and I went to the dancing class. So you can imagine there wasn’t much time over that day. When we got back, Pat was all ready to depart and I had to take over the baby. You see, her husband was due to arrive in London on leave that night, and she went up to meet him. So I bathed the two sprogs and put them to bed, and then the next item on the programme was the arrival of Barbara for two nights. I wanted to meet her, as I knew she had some awkward luggage, but didn’t know quite which train she was coming on. However I worked it out that she might arrive at the bus stop at 8 p.m. or 8.27. At 7.50, when I wanted to get out my bicycle to whizz down and meet her, I couldn’t find the garage key anywhere. I searched frantically, but it was nowhere to be found, so in desperation I seized the triangular file and proceeded to burgle the garage by filing through the padlock. I got down to the bus stop soon after, but she didn’t arrive on either bus, so I decided I must go back and see that the children were alright, and then go down again and meet the 9 p.m. bus. This I did, and was half way down to the Pheasant again when I met her trudging up the hill, an enormous brown paper parcel under one arm, a cake tin with holes in the lid on the other, and a strange lady walking beside her carrying her suitcase on her bicycle. This kind woman had gone right out of her way to help Barbara, who had succeeded in arriving on a bus that wasn’t even down on the timetable! It turned out that Barbara had brought Frances a kitten, a wee ginger job, five weeks old, with blue eyes and white spats, also two large water colours for us from a lady she knows in Huntingdon, and a large suitcase full of winter things to be parked in her trunks in our garage. The water colours are good, I think, views of Scottish lakes. One is very large 3’ X c.2 1/2’ with mount, and I am having some difficulty in getting them [deleted] mounted [/deleted] framed. However, it ought to look very nice in the dining room over the sideboard, where there is a large wallspace. Next morning was fairly peaceful, for Barbara helped with the baby, I bathed her and Barbara administered the bottle. At tea-time Pat and Frank arrived, and there was great uproar. Frank is a charming fellow [words missing] most unassuming and great fun. I am sure you would like him, and I do hope that we can all meet together after the war. You would like Pat too. It is nice to have a man about the house after all these years of undiluted feminine society, - not that I see very much of him! However he has done one or two odd jobs, he is quite handy as carpenter and so on, and gives his daughter her bottle with the utmost sangfroid. Yesterday was their fourth wedding anniversary, and the baby was christened down at St. Giles

church. I was godmother, and managed to find a small silver bracelet in Gerrards Cross for half a guinea which I presented to the infant. We had a teaparty to celebrate the occasion, at which were present Frank’s mother, two sisters and a girl who lives with them, and on Pat’s side Matron from Fircroft (since all Pat’s relations are in New Zealand). We had a posh cake, decorated with some of the flowers I saved from our wedding cake. It was rather amusing about that too. Pat was sent several cakes for Christmas and she gave away most of them but kept one specially for Carol’s christening [sic] When the great day drew near she asked her mother-in-law to send out this parcel, which she hadn’t unpacked, and when it arrived here it turned out to be not a cake at all but some other tins of food! So I had to set to and bake a cake after all. Anyway the christeneing [sic] went off according to plan, except that Carol set up a howl on entering the church and kept it up all through the service, which wasn’t nearly so long as Frances’s. Do you remember that, and how good Frances was? Carol wore Frances’s christening gown and the Shetland shawl. Frances wore one of her sweetest embroidered muslin dresses from India, and her white fur coat, as it was a very chilly afternoon. She had a bright blue ribbon round her hair, and looked really adorable. You have a really lovely little daughter, you know. Do come home soon before she is too grown-up. I grudge every week that passes now when you don’t see her. She is thrilled to bits with her kitten, and I am afraid she is going to throttle the poor little creature with her excessive passion. I have to intervene constantly to save its life, but the kitten seems to like it and always goes back to Frances for more. It is as yet by no means clean, and I am trying to train Frances to wipe up after her cat, but she is not too good.

Today Pat and Frank went off to Windsor, as I said, ostensibly to go on the river, but instead they spent most of their time shopping, and have bought among other things a chest of drawers. Perhaps Pat will be able to keep her room more tidy when she has got more drawer space, though I doubt it!

Did I tell you in my last letter that Mother had offered [inserted] to lend [/inserted] us the small beige carpet which used to be in the nursery at Lido? It arrived today, and I have put it in Frances’s room, and the matting rug which was in there is now down in the kitchen, and the whole place looks very much better.

The garden is still being most unsatisfactory. I don’t know if this season is being particularly difficult, or if our soil is poor and if it is just that I am a rotten gardener, but anyway the result is the same, mothing [sic] grows. I have thinned out the parsnips and the lettuces and the spinach and weeded the early potatoes, and it is all fairly tidy, but it just doesn’t grow! Admittedly the ground is still too dry and we had two or three sharps [sic] frosts this month and the weather is definitely cold, but somehow other people’s gardens look a little better off than mine. I am sending you this week the photo of the front of the house, which the D & P people simply didn’t print the first time. Sorry about the splodge of light right across it, there must be a leak of light in the bellows of my camera, as so [words missing] [inserted] many of my snaps suffer [/inserted from this defect. However I hope the photo will give you some idea of our establishment, which as you will see is not terribly original in design, but nevertheless quite a solid and reliable structure. Frances stands in the gate [inserted] way [/inserted], from which the actual gates are still missing, awaiting repairs. My aunt Con writes that Miss Hoare, your [indecipherable word] [indecipherable word] has just died of heart failure, I’m so sorry - for your sake too. All my love to you, my darling, I long for you terribly, yours always, Ursula.