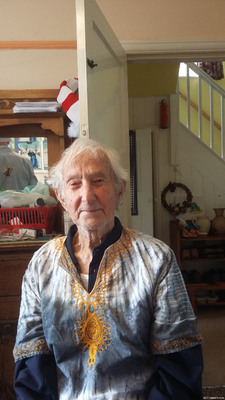 Don was brought up in Newcastle, where he worked for a number of years. He attended a meeting a year before the war began, about alternatives to war and that war didn’t have to be accepted as inevitable. Don joined a community which organised work on a farm in Lincolnshire. After two years he transferred to another similar community, where he remained for about 25 years. Everyone was classed as equal and could vote on who could join this community. Don described everyday life in the community and farm work throughout the seasons. His favourite job was looking after and driving the horses. He worked with poultry for a while and also remembered the pea harvest. RAF Wickenby was one of the nearest airfields to the commune. They had four German prisoners of war working with them, one of whom kept in touch with Don after the war. Don campaigned against war and would sometimes go to the RAF Waddington with anti-war propaganda. A play had been produced about the pacifists, which was shown at the Broadbent Theatre and also at Quaker Meeting Houses.