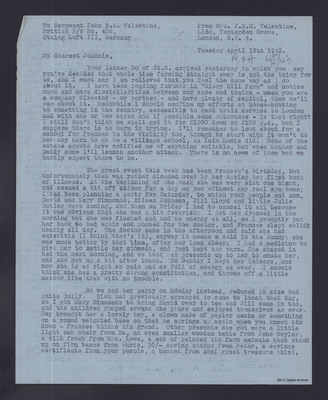 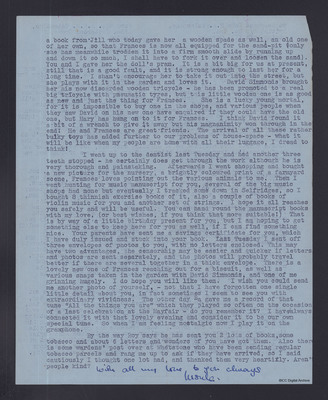 Acknowledges receipt of his letters and agrees with him that farming is probably not for them at this stage. States she will continue house hunting. Reports of daughter's illness and its effect on her birthday celebrations with delayed party. Lists birthday presents and describes recent activities including dental appointment and shopping. Mention sending him envelopes with just photographs as it would be easier for censors. Concludes by saying that he has been sent two lots of books and tobacco.

My dearest Johnnie,
[inserted] R & A 4/5/43 [/inserted]
Your letter 58 of 26.2. arrived yesterday in which you say you’ve decided that whole time farming straight away is not the thing for us, and I must say I am relieved that you feel the same way as I do about it. I have been reading further in “Glory Hill Farm” and notice more and more dissimilarities between our case and theirs – when you are a company director – or partner – and have plenty of capital, then we’ll see about it. Meanwhile I should confine my efforts at house-hunting to something in the country, accessible to good train service to London and with one or two acres and if possible some outhouses – is that right? I still don’t think we shall get it for £1000 down or £100 p.a., but I suppose there is no harm in trying. I’ll remember to look about for a school for Frances in the vicinity too, though to start with it won’t do her any harm to go to a village school, as Iain Howie did. None of the estate agents have notified me of anything suitable, but when Mother and Daddy come I’ll launch another attack. There is no news of them but we hardly expect there to be.

The great event this week has been France’s birthday, but unfortunately that was rather clouded over by her having her first bout of illness. At the beginning of the week she was very sick one night, and seemed a bit off colour for a day or two without any real symptoms; I had been planning a party for Saturday, to which your people and Ann, David and Mary Simmonds, Eileen Johnson, Jill Lloyd and little Julie Butler were coming, and then on Friday I had to cancel it all because it was obvious that she was a bit feverish; I got her dressed in the morning but she was flushed and had no energy at all, so I promptly put her back to bed again and phoned for the doctor, and Frances slept solidly nearly all day. The doctor came in the afternoon and said she had enteritis (I think that’s it), anyway it means a cold in the tummy; she was much better by that time, after her long sleep; I had a medicine to give her to settle her stomach, and just kept her warm. She stayed in bed the next morning, and we took her presents up to her to amuse her, and she got up a bit after lunch. On Sunday I kept her indoors, and now she is as right as rain and as full of energy as ever. I should think she has a pretty strong constitution, and throes off a little matter like that with no trouble.

So we had her party on Monday instead, reduced in size but quite jolly. Bish had previously arranged to come to lunch that day, so I got Mary Simmonds to bring David over to tea and Jill came in too, and the children romped around the place and enjoyed themselves as ever. Roy brought her a lovely toy, a clown made of papier mache or something on a round weighted base so that he springs up again when you knock him down – Frances thinks him grand. Other presents she got were a little light oak chair from Ba, an even smaller wooden table from Jane Meyler, a silk frock from Mrs. Lowe a set of painted tin farm animals that stand up on firm bases from Chris, 10/- saving stamps from Peter, a savings certificate from your people, a bucket from Ann (great treasure this),

a book from Jill who today gave her a wooden spade as well, an old one of her own, so that Frances is now all equipped for the and-pit (only she has meanwhile trodden it into a firm smooth slide by running up and down it so much, I shall have to fork it over and loosen the sand). You and I gave her the doll’s pram. It is a bit big for us at present, still that is a good fault, and it is strong enough to last her for a long time. I shan’t encourage her to take it out into the street, but she plays with it in the garden and loves it. David Simmonds brought her his now discarded wooden tricycle – he has been promoted to a real big tricycle with pneumatic tyres, but this little wooden one is as good as new and just the thing for Frances. She is a lucky young mortal, for it is impossible to buy one in the shops, and various people when they saw David on his new one have enquired if they could have the old one, but Mary has hung on to it for Frances. I think David found it a bit of a wrench to give it away but his magnanimity won through in the end! He and Frances are great friends. The arrival of all these rather bulky toys has added further to our problems of house-space – what it will be like when my people are home with all their luggage, I dread to think!

I went up to the dentist last Tuesday and had another three teeth stopped – he certainly does get through the work although he is very thorough and painstaking. Afterwards I went shopping and bought a new picture for the nursery, a brightly coloured print of a farmyard scene, Frances loves pointing out the various animals to me. Then I went hunting for music manuscript for you, several of the big music shops had none but eventually I tracked some down in Selfridges, so I bought eight thinnish exercise books of it, also a couple of books of violin music for you and another set of strings. I hope it all reaches you safely and will be useful. You can hand round the manuscript books with my love, (or best wishes, if you think that more suitable!) That is by way of a little birthday present for you, but I am hoping to get something else to keep here for you as well, if I can find something nice. Your parents have sent me a savings certificate for you, which I have duly issued and stuck into your book. Last Tuesday I sent off three envelopes of photos to you, with no letters enclosed. This may have two advantages, the censorship may be easier and quicker if letters and photos are sent separately, and the photos will probably travel better if there are several together in a thick envelope. There is a lovely new one of Frances reaching out for a biscuit, as well as various snaps taken in the garden with David Simmonds, and one of me grinning hugely. I do hope you will like them. I wish you could send me another photo of yourself, - not that I have forgotten one single little detail about you, in fact sometimes I seem to see you with extraordinary vividness. The other day Ba gave me a record of that tune “All the things you are” which they played so often on the occasion of a last celebration at the Mayfair – do you remember it? I havealways [sic] connected it with that lovely evening and consider it to be our own special tune. So when I am feeling nostalgic now I play it on the gramophone.

By the way Roy says he has sent you 2 lots of books, some tobacco and about 6 letters and wonders of you have got them. Also there is some wardens’ post over at Whetstone who have been sending regular tobacco parcels and rang me up to ask if they have arrived, so I said cautiously I thought one lot had, and thanked them heartily. Aren’t people kind?

With all my love to you always