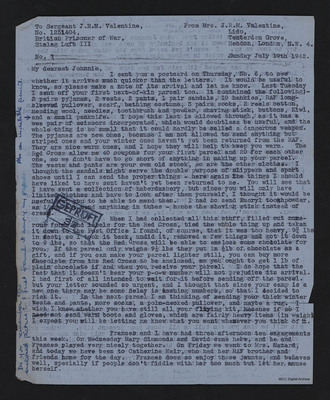 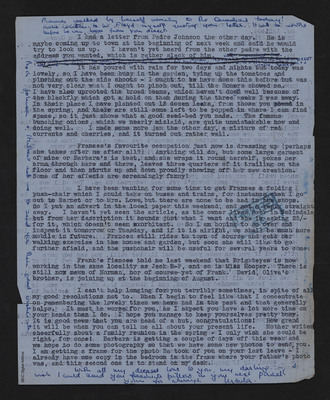 Writes about sending postcard and parcel (with list of contents) and rules about contents. Continues with intricacies of sending parcels through Red Cross. Mentions her and their daughter's activities and visit of padre and trying to get addresses of next of kin.

I sent you a postcard on Thursday, No.6, to see whether it arrives much quicker than the letters. It would be useful to know, so please make a note of its arrival and let me know. Last Tuesday I sent off your first next-of-kin parcel too. It contained the following:- 2 pairs pyjamas, 2 vests, 2 pants, 1 pair sandals, 10 hankies, RAF
long sleeved pullover, scarf, bathing costume, 3 pairs socks, 2 reels cotton, mending wool, needles, toothbrush and powder, shaving stick, buttons, Kiwi, [inserted] Also an indelible pencil. [/inserted] and a small penknife. I hope this last is allowed through, as it has a wee pair of scissors incorporated, which would doubtless be useful, and the whole thing is so small that it could hardly be called a dangerous weapon. The pyjamas are new ones, because I am not allowed to send anything but striped ones and your winter ones haven’t yet been returned from the RAF. They are nice warm ones, and I hope they will help to keep you warm. The Red Cross allow me 40 coupons for your first parcel and 20 for each other one, so we don’t have to go short of anything in making up your parcel. The vests and pants are your own old stock, so are the other clothes. I thought the sandals might serve the double purpose of slippers and sport shoes until I can send the proper things - here again the things I should have liked to have sent haven’t yet been returned to me. You will see that I have sent a collection of haberdashery, but since you will only have limited clothes and have to look after them yourself, I thought it would be useful for you to be able to mend them. I had to send Eucryl toothpowder, as I may not send anything in tubes - hence the shaving stick instead of cream.

When I had collected all this stuff, filled out numerous forms and labels for the Red Cross, tied the whole thing up and taken it down to the Post Office I found, of course, that it was too heavy, 9 3/4 lbs in fact; so I took it back, undid it, removed a few things and got it down to 9 lbs, so that the Red Cross will be able to enclose some chocolate for you. If the parcel only weighs 9 1/2 lbs they put in 1/2 lb of chocolate as a gift, and if you can make your parcel lighter still, you can buy more chocolate from the Red Cross to be enclosed, so you ought to get 1 lb of plain chocolate if and when you receive your parcel. I do hope that the fact that it doesn’t bear your p-o-w number will not prejudice its arrival. I had first of all intended to wait for it before sending off the parcel. but your letter sounded so urgent, and I thought that since your camp is a new one there may be some delay is [sic] issuing numbers, so that I decided to risk it. In the next parcel I am thinking of sending your thick winter vests and pants, more socks, a polo-necked pullover, and maybe a rug. I wish I knew whether you have still all your flying kit, because if so I need not send warm boots and gloves, which are fairly heavy items (in weight) I expect you will be letting me know what you want whenever you think of it.

Frances and I have had three afternoon tea engagements this week. On Wednesday Mary Simmonds and David came here, and he and Frances played very nicely together. On Friday we went to Mrs. Hazard, and today we have been to Catherine Mair, who had her RAF brother and friends home for the day. Frances does so enjoy these jaunts, and behaves well, specially [sic] if people don’t fiddle with her too much but let her amuse herself. [inserted] Do you remember the enclosed picture? I just found it among my papers. [/inserted]

[inserted] Frances walked by herself nearly to the quadrant today! Have written to Mr Floyd myself quoting your letter. It will be months before he can hear from you direct [/inserted]

I had a letter from Padre Johnson the other day. He is maybe coming up to town at the beginning of next week and said he would try to look us up. I haven’t yet heard from the other padre with the address you wanted, which is rather slack of him. [deleted] Letter arrived this morning 20 July. The next-of kin is his father, [/undeleted] [two indecipherable words], REDGATES Rd, MINEHEAD, SOMERSET I also have the address of the [six indecipherable words] had any urgent message he or you would [three indecipherable words] she & I would be able to.

It has poured with rain for two days and nights but today was lovely, so I have been busy in the garden, tying up the tomatoes and pinching out the side shoots - I ought to [deleted] be [/undeleted] have done this before but was not very clear what I ought to pinch out, till the Homers showed me. I have also uprooted the broad beans, which haven’t done well because of the blackfly which got a hold on them during the three weeks I was away. In their place I have planted out 12 dozen leaks, from those you sowed in the spring, and there are still some left to be popped in where I can find space, so it just shows what a good seed-bed you made. The famous bunching onions, which we nearly mislaid, are quite unmistakable now and doing well. I made some more jam the other day, a mixture of red currants and cherries, and it turned out rather well.

Frances’s favourite occupation just now is dressing up (perhaps she takes after me after all?) Anything will do, but some large garment of mine or Barbara’s is best, and she wraps it round herself, pokes her arms through here and there, leaves three quarters of it trailing on the floor and then struts up and down proudly showing off her new creation. Some of her effects are screamingly funny!

I have been wanting for some time to get Frances a folding push-chair which I could take on buses and trains, for instance when I go out to Barnet or to Mrs. Lowe, but there are none to be had in the shops. So I put an advert in the local paper this weekend, and got a reply straight away. I haven’t yet seen the article, as the owner lives over in Colindale but from her description it sounds just what I want and she is asking 25/- for it, which doesn’t seem exorbitant. So I am hoping to go over and inspect it tomorrow or Tuesday, and if it is alright, we shall be much more mobile in future. Frances still rides to town of course and gets her walking exercise in the house and garden, but soon she will like to go further afield, and the pushchair will be useful for several years to come.

Frank’s fiancée told me last weekend that Brighteyes is now working in the same locality as jack B-P, and so is Miss Hooper. There is still no [deleted] w [/undeleted] news of Norman, nor of course yet of Frank. David, Oliva’s brother, is joining up at the beginning of August.

I can’t help longing for you terribly sometimes, in spite of all my good resolutions not to. When I begin to feel like that I concentrate on remembering the lovely times we have had in the past and that generally helps. It must be worse for you, as I expect you have a lot more time on your hands than I do. I hope you manage to keep yourselves pretty busy. It is good news that you are head of a hut, congratulations! How grand it will be when you can tell me all about your present life. Mother writes cheerfully about a family reunion in the spring - I only wish she could be right, for once! Barbara is getting a couple of days off this week and we hope to do some photography so that we have some new photos to send you. I am getting a frame for the photo Ba took of you on your last leave - I already have one copy in the bedroom in the frame where your father’s photo was, and this second one is to stand on my desk.

With all my deepest love to you, my darling - I wish I could send your favourite pillow in your next parcel! Yours for always. Ursula.

[inserted] Both Johnsons & [indecipherable word] ask me to send you their good wishes etc. [/inserted]