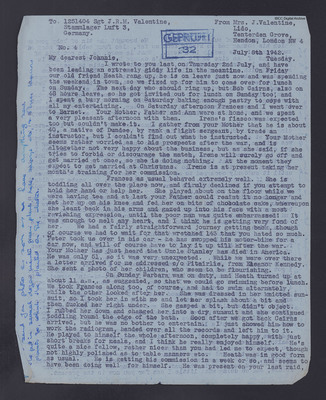 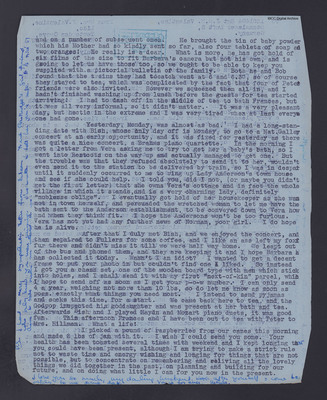 I wrote to you last on Thursday 2nd July, and have been leading an extremely giddy life in the meantime. On Friday our old friend Heath rang up, he is on leave just now and was spending the weekend in town, so we fixed up for him to come over for lunch on Sunday. The next day who should ring up, but Bob Cairns, also on 48 hours leave, so he got invited out for lunch on Sunday too, and I spent a busy morning on Saturday baking enough pastry to cope with all my entertaining. On Saturday afternoon Frances and I went over to Barnet. Your Mother, Father and Ann were at home, and we spent a very pleasant afternoon with them. Irene’s fiasco was expected too but couldn’t make it. I gather from your Mother that he is about 40, a native of Dundee, by rank a flight sergeant, by trade an instructor, but I couldn’t find out what he instructed. Your Mother seems rather worried as to his prospects after the war, and is altogether not very happy about the business, but as she said, if she tries to forbid or discourage the match, Irene will surely go off and get married at once, so she is doing nothing. At the moment they expect to get married at Christmas. Irene is at present taking her month’s training for her commission.

Frances as usual behaved extremely well. She is toddling all over the place now, and firmly declines if you attempt to hold her hand or help her. She played about on the floor while we were having tea and at last your Father could resist it no longer and sat her up on his knee and fed her on bits of chocolate cake, whereupon she leant back in his arms and gazed up into his face with a most ravishing expression, until the poor man was quite embarrassed! It was enough to melt any heart, and I think he is getting very fond of her. We had a fairly straightforward journey getting back, though of course we had to wait for that wretched 143 that you hated so much. Peter took us over in his car - he has swopped his motor-bike for a car now, and will of course have to lay it up till after the war. Your Mother has just heard that Uncle Stanley has died in America. He was only 51, so it was very unexpected. While we were over there a letter arrived for me addressed c/o Pitairlie, from Eleanor Kennedy. She sent a photo of her children, who seem to be flourishing.

On Sunday Barbara was on duty, and Heath turned up at about 11 a.m., as suggested, so that we could go swimming before lunch. We took Frances along too, of course, and had to swim alternately, while the other looked after her. She was dressed in her knitted sunsuit, so I took her in with me and let her splash about a bit and then ducked her right under. She gasped a bit, but didn’t object. I rubbed her down and changed her into a dry sunsuit and she continued toddling round the edge of the bath. Soon after we got back Cairns arrived, but he was no bother to entertain. I just showed him how to work the radiogram, handed over all the records and left him to it. He played to himself the whole afternoon, completely happy, with just short breaks for meals, and I think he really enjoyed himself. He’s quite a nice fellow, rather nicer than you had led me to expect, though not highly polished as to his table manners etc. Heath was in good form as usual. He is getting his commission in a week or so, and seems to have been doing well for himself. He was present on your last raid,

[inserted] [missing words] send your photo as soon as we have anything new. I’ve put in several dozen winter green plants, Kale, savoys etc, and then marrow plants too, which I’ve planted on the shelter. [/inserted]

and on a number of subsequent ones. He brought the tin of baby powder which his Mother had so kindly sent so far, also four tablets of soap and two oranges! He really is a dear. What is more, he has got hold of six films of the size to fit Barbara’s camera but not his own, and is g [deleted] e [/deleted] oing to let us have those too, so we ought to be able to keep you supplied with a pictorial bulletin of the family. Both he and Bob found that the trains they had to catch went at 6 and 6.30, so of course they stayed to tea, which was complicated by the fact that four of Peter’s friends were also invited. However we squeezed them all in, and I hadn’t finished washing up from lunch before the guests for tea started arriving! I had to dash off in the middle of tea to bath Frances, but it was all very informal, so it didn’t matter. It was a very pleasant day, hectic in the extreme and I was very tired when at last everyone had gone.

Yesterday, Monday, was almost as bad. I had a long-standing date with Bish, whose only day off is Monday, to go to a Nat. Gallery concert at an early opportunity, and it was fixed for yesterday as there was quite a nice concert, a Brahms piano quartette [sic]. In the morning I got a letter from vera asking me tom try to get her a baby’s bath, so I went into Restcots on the way up and actually managed to get one. But the trouble was that they refused absolutely to send it to her, wouldn’t even send it to the station to be delivered by train, so I was in despair until it suddenly occurred to me to ring up Lady Anderson’s town house and see if she could help. I told you did I not, (or maybe you didn’t get the first letter) that she owns Vera’s cottage and in fact the whole village in which it stands, and is a very charming lady, definitely “noblesse oblige”. I eventually got hold of her housekeeper as she was not in town herself, and persuaded the wretched woman to let me have the bath sent to the Anderson establishment, to be conveyed down to Vera how and when they think fit. I hope the Andersons won’t be too furious. Vera has not yet had any further news of Norman, poor girl. I do hope he is alive.

After that I duly met Bish, and we enjoyed the concert, and then repaired to Fullers for some coffee, and I like an ass left my fox [deleted] f [/deleted] fur there and didn’t miss it till we were half way home. We leapt out of the bus and phoned them, and they are keeping it and I hope Barbara has collected it today. Wasn’t I an idiot? I wanted to get a decent frame to put your photo in but couldn’t find one I liked. So instead I got you a chess set, one of the wooden board type with men which stick into holes, and I shall send it with my first “next-of-kin” parcel, which I hope to send off as soon as I get your p-o-w number. I can only send 4 a year, weighing not more than 10 lbs, so do let me know as soon as poss. exactly what things you need most. I intend to send pyjamas and socks this time, for a start. We came back here to tea, and the Godpop inspected his goddaughter and was present at her bath and tea. Afterwards Bish and I played Haydn and Mozart piano duets, it was good fun. This afternoon Frances and I have been out to tea with Peter to Mrs. Hillman. What a life!

I picked a pound of raspberries from our canes this morning and made 2 lbs of jam with it. I wish I could send you some. Your health has been toasted several times with weekend and I kept longing that you could have been present, although I am trying to make a strict rule not to waste time and energy wishing and longing for things that are not possible, but to concentrate on remembering and reliving all the lovely things we did together in the past, on planning and building for our future, and on doing what little I can for you now in the present.

I love you so much my darling husband. Look after yourself & come back safely to me some day. Yours for ever, Ursula.

[underlined] P-S [/underlined] I had a really sympathetic letter from Eileen, Frank Routledge’s girlfriend, who only knew you were missing. I’ve written to tell her your safe. It is nice of them to take such an interest in us.