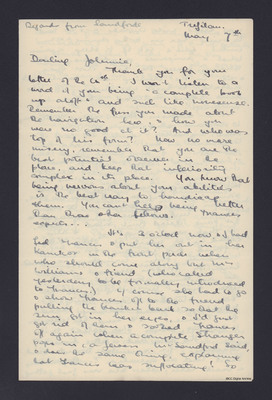 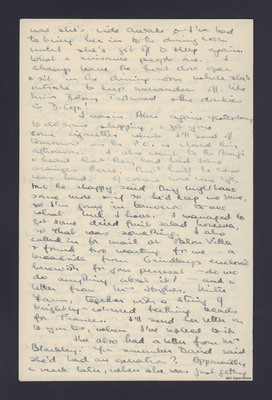 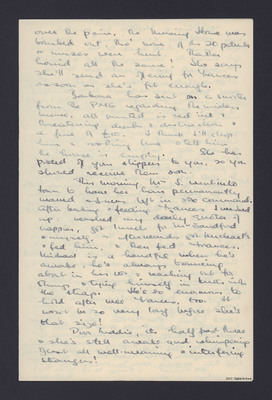 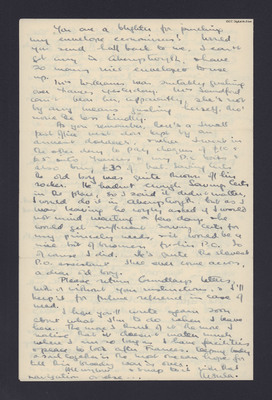 Comments on his reports of problems on his course and how he had previously been top of his course and goes on to encourage him. Continues with baby news and descriptions of her activities particularly getting hold of fruit and mentioning mail she had received. Carries on with news of friends family and says a parcel is on its way with slippers. Concludes with more gossip and news.

Regards from the Sandfords Trefilan May 7th
Darling Johnnie, Thank you for your letter of the 4th. I won't listen to a word of your being “a complete boob up aloft” & such like nonsense. Remember the fuss you made about the navigation here, & how you were no good at it? And who was top of his form? Now no more misery, remember that you are the best potential observer in the place, & keep that inferiority complex in its place. You know that being nervous about your abilities is the best way to handicap them. You can't help being better than those other fellows. Frances expects . . . . It's about 3 o'clock now & I had fed Frances & put her out in her Karrikot in the front porch when who should come along but Mrs Williams & friend (who called yesterday to be formally introduced to Frances.) Of course she had to go & show Frances off to the friend pulling the blanket back so that the sun got in her eyes, & I'd just got rid of them & soothed Frances off again when a complete stranger pops in, a Jewess Mrs Sandford said, & does the same thing, explaining that Frances was suffocating! So
[page break]
now she's wide awake & I've had to bring her in to the dining room until she's got off to sleep again. What a nuisance people are. I always leave the front door open & sit in the dining room while she's outside to keep marauders off, like Miss Betsy Trotwood & the donkeys in D. Cop!
I was in Aber. again yesterday to do some shopping, & got you some cigarettes which I'll send off tomorrow as the P.O. is closed this afternoon. I also went to the NAAFI & heard that they had had some oranges there, tho' half the case was bad. Of course none were left, but the chappy said they might have some more & if so he'd keep me some, so I'm going in tomorrow to see what luck I have. I managed to get some dried fruit salad however, so that was something. I also called in for mail at Aston Villa found two waiting for me – a broadside from Grindlays enclosed herewith for your perusal – do we do anything about it? & a letter from Mrs Hughes. Mitre Farm, together with a string of brightly coloured teething beads for Frances. I'll send her letter on to you, when I've replied to it. I've also had a letter from Mrs Blaikley; you remember David said she'd had an operation? Apparently a week later, when she was just getting
[page break]
over the pain, the Nursing Home was bombed out, tho' none of the 20 patients or nurses were hurt. Rather horrid all the same! She says she'll send an offering for Frances as soon as she's fit enough.
Ba has sent on a snorter from the PMG regarding the wireless licence, all printed in red ink & threatening death & destruction & a fine of £10. I think I'll drop him a soothing line & tell him the house is empty. She has posted off your slippers to you, so you should receive them soon. This morning Mrs S. went into town to have her hair permanently waved & I was left in sole command. After bathing & feeding Frances I washed up, washed my daily quota of nappies, got lunch for Mr Sandford & myself, & afterwards got Michael's & fed him, & then fed Frances. Michael is a handful when he's awake, he's always bouncing about in his cot & reaching out for things & tying himself in knots with the strap. He's so enormous to hold after wee Frances, too. It won't be so very long before she's that size! Poor kiddie, its half past three & she's still awake & whimpering. Blast all well-meaning & interfering strangers!
[page break]
You are a blighter for pinching my envelope economies! Would you send half back to me, I can't get any in Aber., & have so many nice envelopes to use up. Mrs Williams was suitably gushing over Frances yesterday. Mrs Sandford can't bear her apparently, she's not by any means gushing herself, tho' none the less kindly. As you remember, there's a small post office next door kept by an ancient dodderer, & when I went in the other day to pay cheques of £10 & £5 into Frances & my P.O. books & also buy £30 of Nat. Saving Certs the old boy was quite thrown off his rocker. He hadn't enough savings certs in the place, so I said it didn't matter, I would do it in Aber., but as I was leaving he coyly asked if I would not mind waiting a few days & he would get sufficient Saving Certs for my princely needs, & it would be a nice bit of business for his P.O. So of course I did. He's quite the slowest P.O. assistant I've ever come across, a dear old boy.
Please return Grindlays letter with or without your instructions & I'll keep it for future reference in case of need. I hope you'll write again soon about what I'm to do when I leave here. The more I think of it the more I realise that it doesn't matter much where I am so long as I have facilities & peace to look after Frances. Keeping body & soul together is the most one can hope for till this bloody war is over. All my love, & snap to it with that navigation or else. . . Ursula