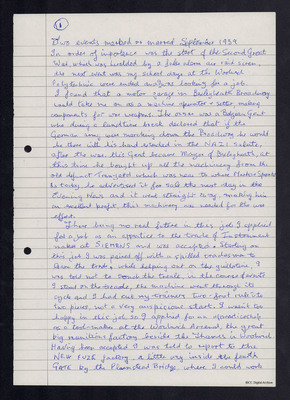 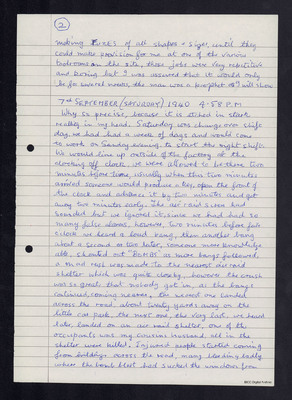 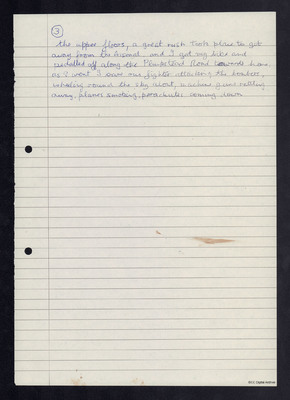 Ted Neale describes the start of the war and the end of his schooling. After a couple of jobs, which he left quickly, he moved to the Woolwich Arsenal as an apprentice tool maker. On Saturday 7th September 1940 an air raid destroyed the factory, killing all those who had reached the shelter.

1
Two events marked or marred September 1939 [sic] In order of importance was the start of the Second Great War, which was heralded by a false alarm air raid siren, the next event was my school days at the Woolwich Polytechnic were ended and [inserted] I [/inserted] was looking for a job. I found that a motor garage in Bexleyheath Broadway would take me on as a machine operator & setter, making components for war weapons. The owner was a Belgian Gent who during a lunchtime break declared that if the German army were marching down the Broadway he would be there with his hand extended in the NAZI salute, after the war, this Gent became Mayor of Bexleyheath, at this time he bought up all the machinery from the old defunct Tram yard which was near to where Marks & Sparks [Marks & Spencer] is today, he advertised it for sale the next day in the Evening News and it went straight away, making him an excellent profit, this machinery was needed for the war effort.
There being no real future in this job I applied for a job as an apprentice to the trade of Instrument maker at SIEMENS and was accepted. Starting on this job I was paired off with a skilled tradesman to learn the trade, while helping out on the guillotine, I was told not to touch the treale [sic], in the course of events I stood on the treade [sic], the machine went through its cycle and I had cut my trainers two-foot rule into two pieces, not a very auspicious start. I wasn’t too happy in this job, so I applied for an apprenticeship as a tool-maker [sic] at the Woolwich Arsenal, the great big munitions factory beside the Thames in Woolwich. Having been accepted I was told to report to the NEW FUZE [sic] factory, a little way inside the fourth GATE by the Plumstead Bridge, where I could work
[page break]
2
Making FUZES [sic] of all shapes & sizes, until they could make provision for me at one of the various toolrooms in the site, these jobs were very repetitive and boring but I was assured that it would only be for several weeks, the man was a prophet as I will show
7th SEPTEMBER (SATURDAY) 1940 4.58 P.M
Why so precise, [sic] because it is etched in stark reallity [sic] in my head. Saturday was change over [sic] shift day, we had had a week of days and would come to work on Sunday evening, to start the night shift. We would line up outside of the factory at the clocking off clock, we were allowed to be there two minutes before time, usually when this two minutes arrived someone would produce a key, open the front of the clock and advance it by two minutes and get away two minutes early. The air raid siren had sounded but we ignored it, since we had had so many false alarms, however, two minutes before five o’clock we heard a loud bang, then another bang about a second or two later, someone more knowledgeable, shouted out “BOMBS” as more bangs followed, a mad rush was made to the nearest air raid shelter which was quite close by, however the crush was so great, that nobody got in, as the bangs continued, coming nearer, the nearest one landed across the road, about twenty yards away on the little car park, the next one, the very last, we heard later, landed on an air raid shelter, one of the occupants was my cousins husband, all in the shelter were killed. Injured people started coming from buildings across the road, many bleeding badly, where the bomb blast had sucked the windows from
[page break]
3
the upper floors, a great rush took place to get away from the Arsenal, and I got my bike and pedalled off along the Plumpstead [sic] Road towards home, as I went I saw our fighter attacking the bombers, wheeling round the sky about, machine guns rattling away, planes smoking, parachutes coming down