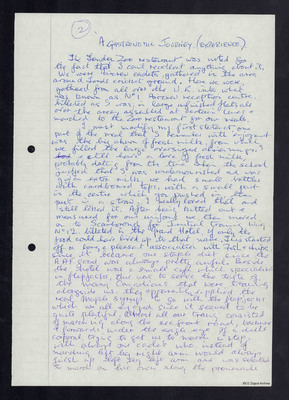 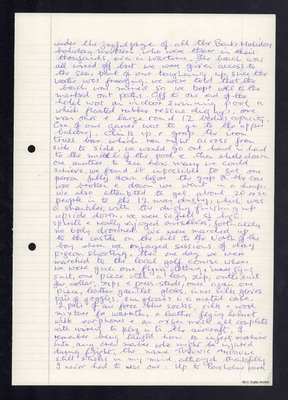 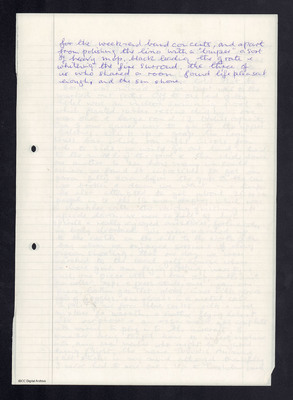 Ted Neale's recalls his absence of memory of the food at No 1 Aircrew Reception at Lords Cricket Ground, apart from the fresh milk. He was posted to Scarborough where the food was so bad that they ate fish and chips and flapjacks at a nearby cafe. There was a lot of marching and swimming, some in the freezing sea and some in an indoor pool. They received their flying uniforms at the golf course. He says they found 'life pleasant enough'.

The London Zoo restaurant was noted for the fact that I can’t recollect anything about it. We were Aircrew cadets, gathered in the area around Lords cricket ground. Here we were, gathered from all over the U.K. into what was known as No 1 Aircrew reception centre, billeted as I was, in large unfinished flats all over the area, assembled at certain times & marched to the Zoo restaurant for our meals.
I must modify my first statement, one part of the meal that I remember with enjoyment was the big churn of fresh milk, from which we filled the large oversized china mugs. I [deleted] had [/deleted] & still have a love Of [sic] fresh milk, probably dating from the time when the school judged that I was undernourished and was given extra milk, we had small bottles with cardboard tops, with a small part in the centre which you pushed in, then put in a straw. I really loved that and still liked it. After being kitted out &measured for our uniforms we then moved on to Scarborough for Initial training Wing No 12. billeted in the Grand Hotel, if only the food could have lived up to that name. This started off a long & pleasant association with Fish & chips, since it became our staple diet since the R.A.F. food was always pretty awful. Beside the hotel was a small cafe which specialised in flapjacks, this was to serve the taste of the many Canadians that were training alongside us, they apparently supplied the real maple syrup to go with the flapjacks which we all enjoyed since it seemed to be quite plentiful. Almost all our traing [sic] consisted of marching along the seafront road, backward & forwards under the eagle eye of a drill corporal, trying to get us to march in step, with always one cadet who instead of marching left leg right arm would always finish up left leg left arm and was selected to march on his own along the promenade
[page break]
under the joyful gaze of all the Bank Holiday holiday makers who were there in their thousands, even in wartime. The beach was all wired off but we were given access to the sea, part of our toughening up, since the water was freezing, we were told that the beach was mined so we kept well to the marked out paths. Off to one end of the hotel was an indoor swimming pool on which floated rubber rescue dinghys, one man ones & large round 12 bodies capacity. One of our games was to go to the upper balcony, climb up & grab the iron truss bar which ran right across from side to side, we would go out hand in hand to the middle of the pool & then slide down one another to see how many we could achieve, we found it impossible to get one person fully down before the grip on the bar was broken & down we went in a heap. We also attempted to get about 20 or so people in to the 12 man dinghy, which was a shambles, with the dinghy finishing up upside down, we were so full of high spirits & really enjoyed ourselves, fortunately no body drowned. We were marched up to the castle on the hill, to the north of the bay where we enjoyed sessions of clay pigeon shooting, then one day we were marched to the local golf course where we were given our flying clothing, inner flying suit, one piece with a long zip, outer suit fur collar, zips & press-studs, once again one piece, leather gauntlet gloves, inner silk gloves pair of goggles, sun glasses in a metal case, 2 pair of air force blue socks, silk & wool mixture for warmth, a leather flying helmet with earphones & an oxygen mask all complete with wiring to plug in to the aircraft. I remember being taught how to inject morhine [sic] into any crew member who might be injured during flight, the name TUBUNIC AMPOULE still sticks in my mind, although thankfully I never had to use one. Up to Peasholme park
[page break]
for the week-end band concerts, and apart from polishing the lino with a “bumper” a sort of heavy mop, black leading the grate & whitening the fire surround, the three of us who shared a room found life pleasant enough, and the sun shone.