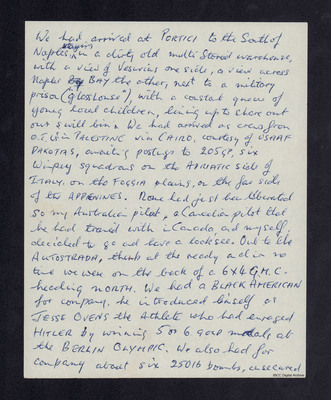 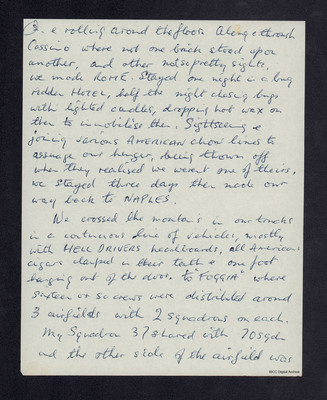 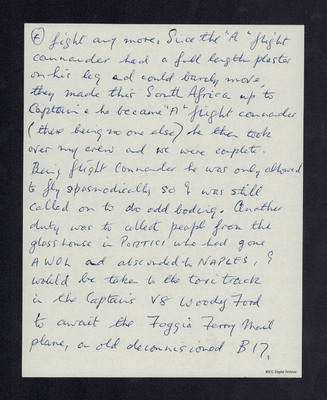 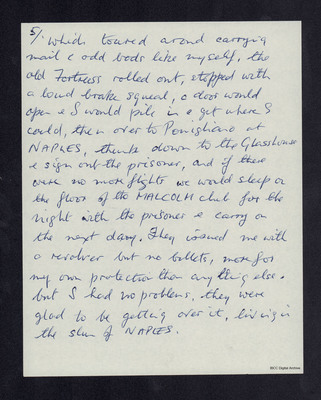 Ted arrived in Portici, south of Naples from training in Palestine. He recalls a trip to Rome driven by Jesse Owens, the Olympic athlete. Afterwards he was transferred to Foggia to join 37 Squadron. There was a shortage of crews and he did not fly regularly. Ted comments on what happened to various aircrew.

We had arrived at PORTICI to the South of Naples, [inserted] staying [/inserted] in a dirty old multi Storied warehouse, with a view of Vesuvias [sic] one side, a view across Naples [deleted] Boy [/deleted] BAY the other, next to a military prison (“glasshouse”), with a constant queue of young local children, lining up to share out our swill bin. We had arrived as crews from O.T.U’s in PALESTINE via CAIRO, courtesy of USAAF DAKOTAS, awaiting postings to 205GP, six Wimpey squadrons on the ADRIATIC side of ITALY, on the FOGGIA plains, on the far side of the APPENINES. Rome had just been liberated so my Australian pilot, a Canadian pilot that he had trained with in Canada, and myself, decided to go and have a looksee. Out to the AUTOSTRADA, [indecipherable word] at the ready and in no time we were on the back of a 6 x 4 G.M.C. heading NORTH. We had a BLACK AMERICAN for company, he introduced himself as JESSE OVENS [sic] the Athlete who had enraged HITLER by winning 5 or 6 GOLD medals at the BERLIN OLYMPIC. We also had for company about six 250lb bombs, unsecured
[page break]
[circled] 2 [/circled]. & rolling around the floor. Along & through Cassino where not one brick stood upon another, and other not so pretty sights, we made ROME. Stayed one night is a bug ridden HOTEL, half the night chasing bugs with lighted candles, dropping hot wax on them to immobilise them. Sightseeing & joining various AMERICAN chow lines to assuage our hunger, being thrown off when they realised we werent [sic] one of theirs, we stayed three days then made our way back to NAPLES.
We crossed the montains [sic] in our trucks in a continuous line of vehicles, mostly with HELL DRIVERS headboards, all Americans cigars clamped in their teeth & one foot hanging out of the door. to “FOGGIA” where sixteen or so crews were distributed around 3 airfields with 2 squadrons on each.
My Squadron 37 shared with 70 sqdn and the other side of the airfield was
[page break]
[circled] 3 [/circled] taken up by the 99th Bomb Group B17 Fortresses of the 15th Air force.
After a couple of days sorting out our tents etc the pilots were sent off on their experience trip, my pilot went down over MILAN with a South African crew on their 40, tour [indecipherable word] trip, no survivors. One other of the pilots got hit in the hip by a cannon shell & went [deleted] T [/deleted] back to Canada. Our crew became headless and I was stood in to a crew whose NAVIGATOR went sick it was piloted by the CANADIAN that I had been up to ROME with, his first operation and mine, we had pandemonium when the photo flash started to misbehave, but we survived. Then a South Africa Lieutent [sic] pilot who had baled out over Nth Italy rowed back along the coast, bringing back to AUSTRIAN (GERMAN) Soldiers who didn’t want to
[page break]
[circled] 4 [/circled] fight any more. Since the “A” flight commander had a full length plaster on his leg and could barely move, they made this South African up to Captain & he became “A” flight commander (there being no one else) he then took over my crew and we were complete.
Being Flight Commander he was only allowed to fly spasmodically so I was still called on to do odd boding. Another duty was to collect people from the glasshouse in PORTICI who had gone AWOL and absconded to NAPLES, I would be taken to the taxi track in the Captain’s V8 Woody Ford to await the Foggia Ferry Mail plane, a old decommisioned [sic] B17.
[page break]
[underlined] 5 [/underlined]. which toured around carrying mail & odd bods like myself, the old Fortreess [sic] rolled out, stopped with a loud brake squeal, a door would open & I would pile in & get where I could, then over to Pomigliano at NAPLES, thumb down to the Glasshouse & sign out the prisoner, and if there were no more flights we would sleep on the floor of the MALCOLM club for the night with the prisoner & carry on the next day. They issued me with a revolver but no bullets, more for my own protection than anything else, but I had no problems, they were glad to be getting over it, living in the slum of NAPLES.