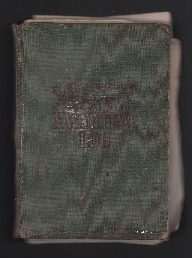 Les Arrowsmith's wartime note book during 1944 and 1945 whilst a prisoner of war in Stalag Luft 7. In the book he has recorded addresses of friends, a list of clothes and their prices, books and magazines needed, 'more ideas', records, calendar, detailed events pertaining to random days, sketches of the camp, dates of events prior to prison camp, camp life, cake recipes, contents of food parcels, German food issue, future clothes purchases, plans for future holidays and plans for future meals. Also included are the rumours and news received about the progress of the war in May 1945; moving out (as the Russians were advancing) and the Long March to Stalag 3A; the liberation of the camp by the Russians and Americans.

One note book with handwritten annotations