14 items. The collection concerns Flight Sergeant Les Arrowsmith (b.1920) who flew operations as a bomb aimer with 576 Squadron from RAF Elsham Wolds until his Lancaster was shot down 21/22 May 1944 and he became a prisoner of war. The collection includes his prisoner of war diary, his log book, photographs, a scrap book and correspondence. After the war he continued to serve with the RAF and remustered to become a navigator.

The collection has been loaned to the IBCC Digital Archive for digitisation by Mike Arrowsmith and catalogued by Barry Hunter. 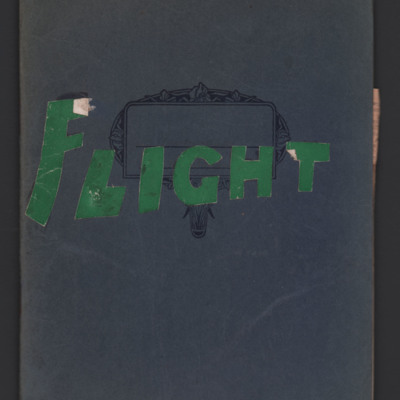 Cover of a notebook containing cuttings of 1930s aircraft. 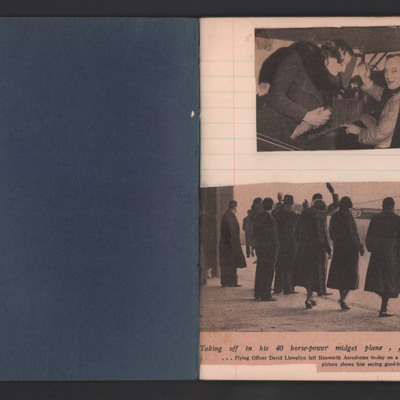 Cutting 1 is of David Llewellyn saying goodbye to Mrs Llewellyn. He is at the control of a light aircraft.
Cutting 2 is a group of civilians waving the light aircraft off.
The caption reads ' Taking off in his 40 horse-power midget plane...Flying… 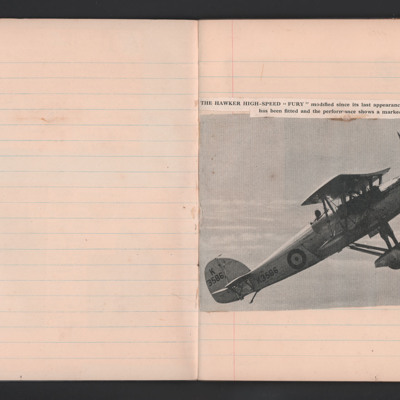 Air-to-air view of a Fury in a climb, captioned 'The Hawker High-Speed Fury modified since its last appearance in public. A later type engine has been fitted and the performance shows a marked increase'.

History in the Making 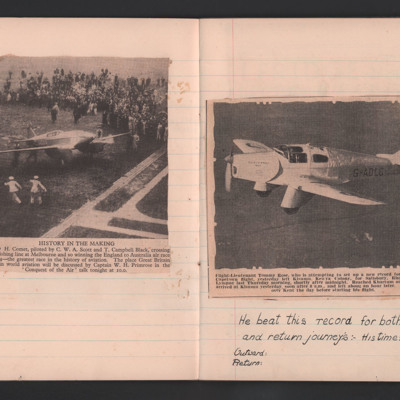 Cutting 1 is a Comet racer surrounded by many spectators, captioned 'History in the Making. The D.H. Comet, piloted by C.W.A. Scott and T. Campbell Black, crossing the finishing line at Melbourne and so winning the England to Australia air race of…

Know them when you see them 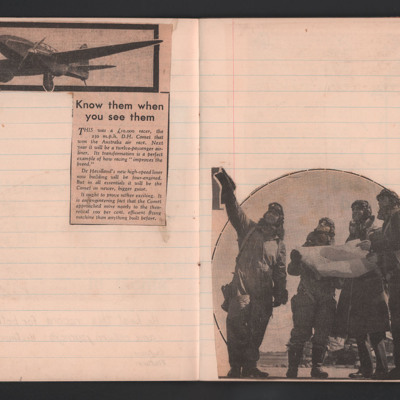 Newspaper cutting 1 is a Comet Racer in flight with a caption praising its abilities and its development into a 12-seat airliner.
Cutting 2 is four airmen with a chart. They are dressed in flying gear and parachutes. One is pointing to the sky. 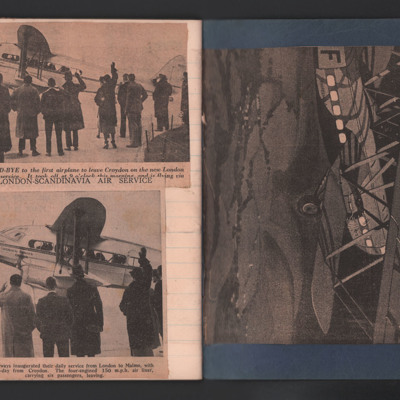 Cutting 1 is a side view of a DH86 Express airliner being waved off by a small group of spectators, captioned 'Waving Good-Bye to the first aeroplane to leave Croydon on the new London to Scandinavia service. It took off at 9 o'clock this morning and… 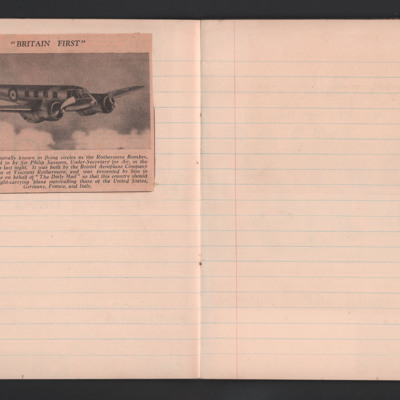 Air-to-air view of a Blenheim above clouds. The caption refers to the aircraft as the Rothermere Bomber. 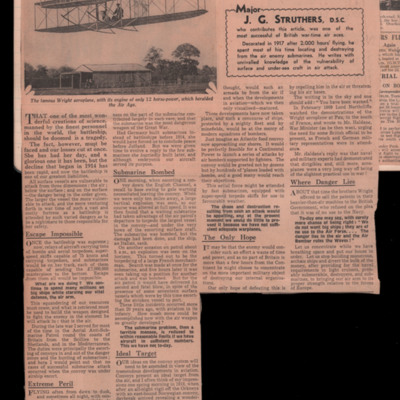 An article written by Major J. G Struthers. He argues against the practicality of large battleships which can easily be destroyed by aeroplane, fast torpedo boats and submarines. He suggests that money would be better spent on aircraft and submarines…

Three newspaper cuttings -
Cutting 1 is about a Cursed Farm, a farmer in Eastbourne had rented a farm and lost a substantial amount of money.
Cutting 2 is about a five inch gun from HMS Chester beside which Jack Cornwell , VC stood at the battle of… 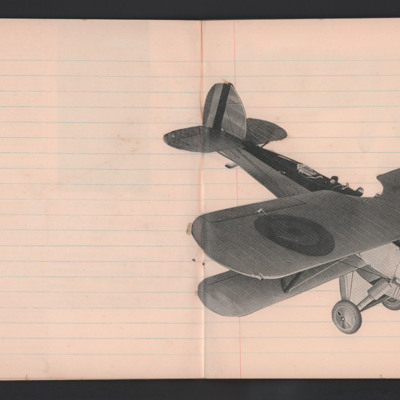 A drawing of a biplane. 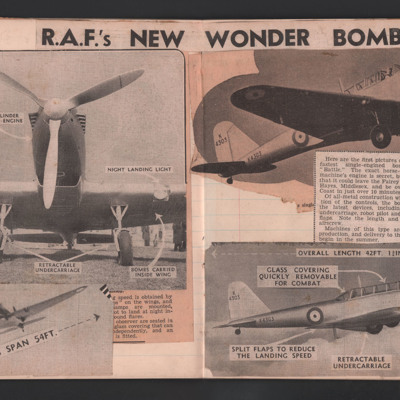 Seven cuttings about the new bomber, the Fairey Battle.
Cutting 1 is a nose image showing its three bladed propeller. There are annotations referring to the engine, undercarriage, landing lights and bomb storage areas.
Cutting 2 is an air-to-air… 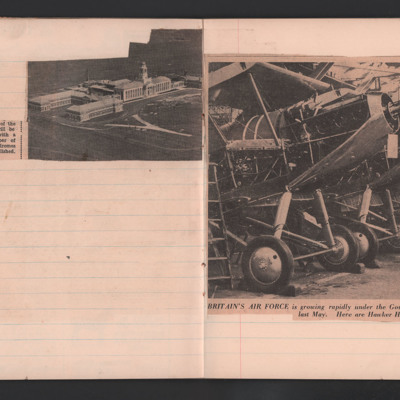 Cutting 1 is an aerial view of RAF Cranwell, the RAF's Officer training college.
Cutting 2 is a photograph of a line of Hawker Harts captioned 'Britain's Air Force is growing rapidly under the Government's two-year expansion programme announced… 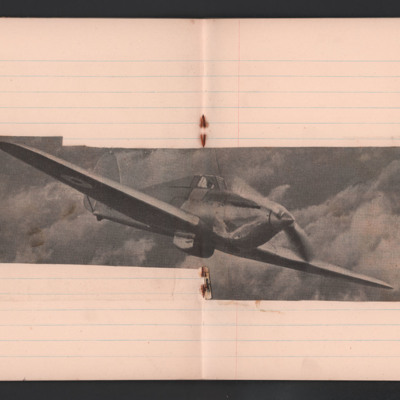 An air-to-air view of a Hurricane, taken from the front. 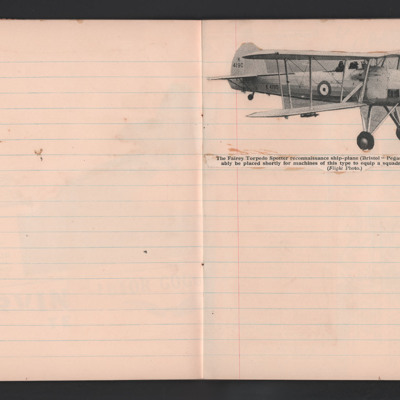 A picture of a Swordfish captioned 'The Fairey Torpedo Spotter reconnaissance ship-plane (Bristol"Pegasus"). An order will probably be placed shortly for machines of this type to equip a squadron of the Fleet Air Arm. (Flight Photo.)'. 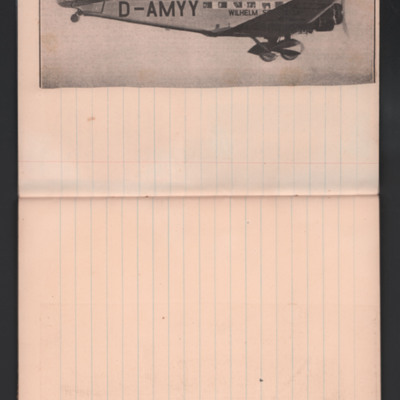 An air-to-air view of a Junkers Ju 52, D-AMYY, transport aircraft. 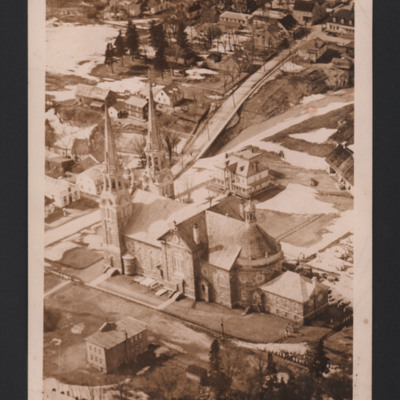 A low oblique aerial photograph of a church. There is snow in gardens and parks. On the reverse 'Ancienne Lorette Church P.Q. Each spire has a permanently lighted cross.' 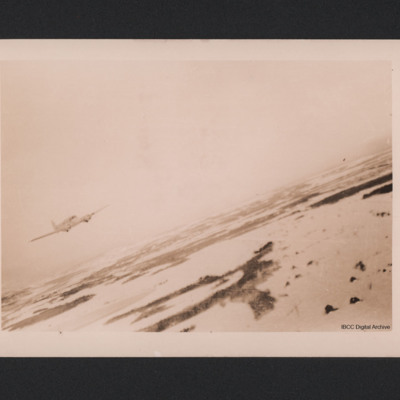 An air-to-air photograph of an Anson in flight over a snowy landscape. 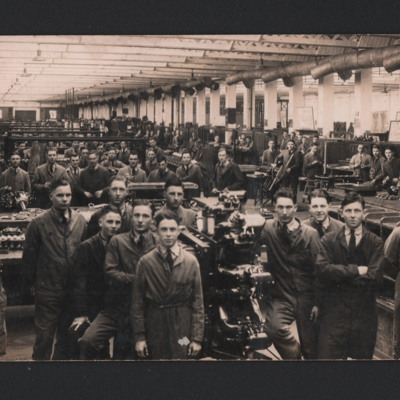 A large number of men working in a Rolls Royce factory. 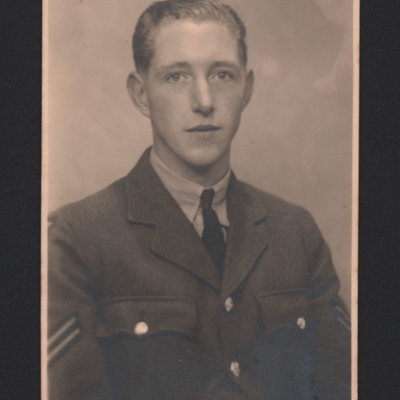 A half-length portrait of Les Arrowsmith in uniform with corporal stripes. 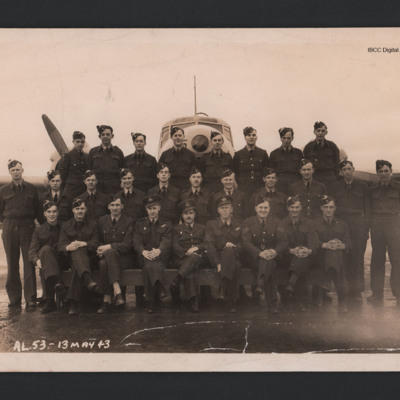 Receipt for a sum of money from the Provident Association 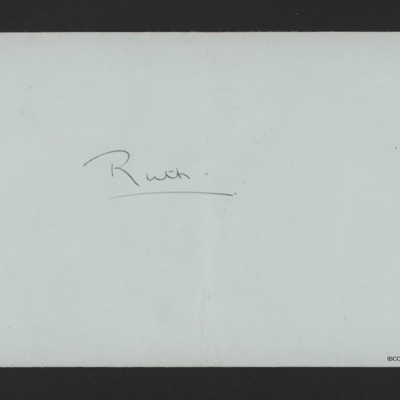 A receipt signed by Ruth Arrowsmith for a one quarter share of her mother's savings. 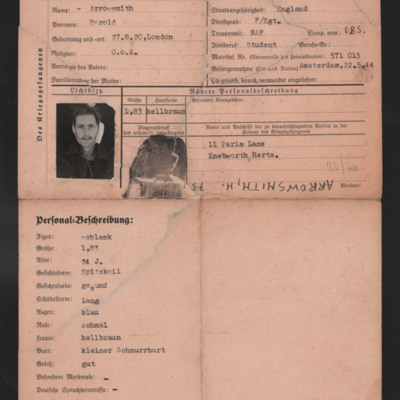 A card produced by the German authorities with personal details of Les Arrowsmith. It includes his date of capture, home address, photograph and physical appearance. 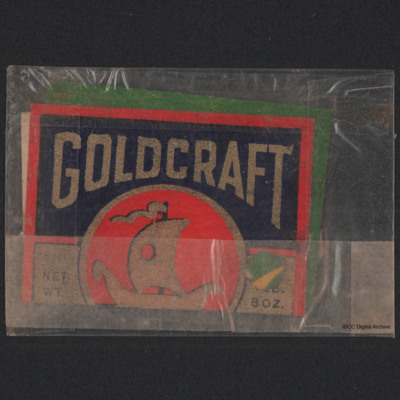 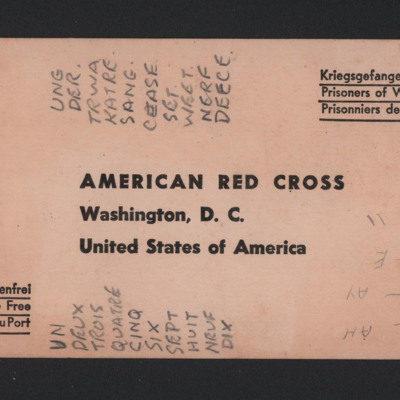 A postcard addressed to the American Red Cross. On the reverse is a section to be filled in by the recipient. There are handwritten annotations with French numbers, one to ten with phonetic pronunciations.
View all 29 items