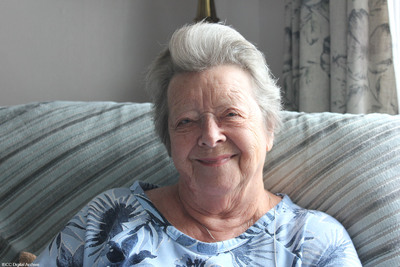 Born in Peterborough, Eileen Widdowson’s father died when she was quite young, which resulted in the family moving to Grantham. With the East Coast main railway line and also a munitions factory, Grantham was a regular target for the Luftwaffe. Eileen recalls life at school, describes being told to sit under desks or sitting in the cloakroom with her coat over her head during air raids. On one occasion she had been collected from school by her mother and they had become trapped in a street when a brewers dray horse had bolted, blocking their exit. She recalls looking up at the diving aircraft, and being close enough to be be able to see the pilot’s eyes through his goggles. Workers from all over the country came to work at the munitions factory, and Eileen remembers sleeping three to a bed, to allow workers to be billeted in the spare bedroom. She collected rose hips and watercress to be sold, with profits being donated to the Red Cross. Grantham was a social destination for the many nearby airfields, and although there was little trouble with personnel, she does recall how white and black Americans would often fight, her first experience of racial discrimination. Before marrying, her husband had enlisted in the Royal Engineers after the war and was stationed in Berlin during the Berlin Airlift, working on the airfields. Two of her daughters later joined the RAF. Eileen gives accounts of the experiences of all three, including one of her daughter’s rejoining the RAF after a change in legislation, initially being forced to leave when becoming pregnant.