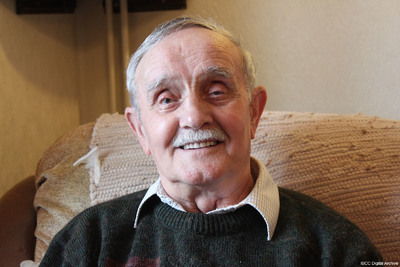 Ken Sleaford was born and raised near Coningsby on the family farm. Tells of life on the farm before and during the war, when it was handed over to the Air Force, to be converted into an airfield and incorporated into RAF Coningsby. Mentions various episodes: seeing a Spitfire for the first time; Irish labourers working on the site; the friendly relationship with the aircrews; spending nights in the air raid shelters; a flight sergeant lodging at their house; an aircrew bailing out of a Halifax; driving the dumpers; German prisoners of war; watching the bombs being delivered by train. As a little boy, he remembers having a very exciting and eventful time. After the war, he moved with his family to another farm at Gayton le Marsh.