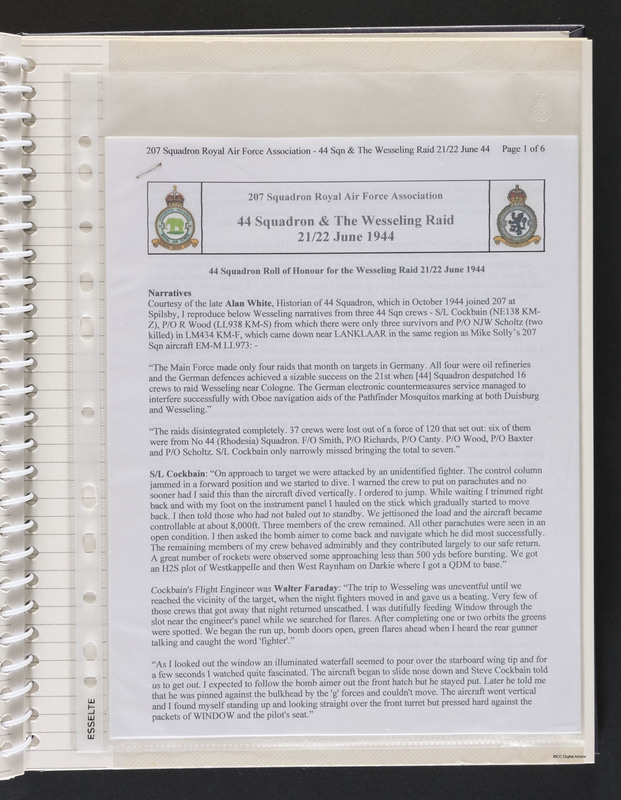 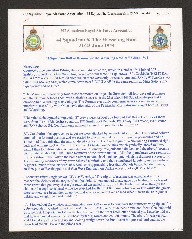 Six page document courtesy of the late Allen White - 44 Squadron Historian. Reproduces narratives from three 44 Squadron crews involved in the operation. Overall the operation lost 37 crews from 120 launched against Wesserling oil refinery near Cologne. 44 Squadron dispatched 16 aircraft of which 6 were lost. Germans successfully interfered with Oboe of pathfinder Mosquito aircraft and the operation disintegrated. First narrative recounts experience of Squadron Leader Cockbain who lost control of his aircraft after attack by night fighter. Some crew baled out before he regained control and after a struggle successfully returned to base. Second narrative recounts experience of Cockbain's flight engineer, Walter Faraday. Reports on damage and that rear gunner is stuck in malfunctioned turret. Describes recovery to base and feelings next day. Final account from this crew is from the mid upper gunner Albert Bracegirdle who baled out and awoke in a forest. After evading he hands himself in due to injury and the fact he is deep in Germany. He notes that two other squadrons on the operation lost six crews. He notes that plan was standard 5 Group low level marking technique but bomb on H2S if no markers. However operation bore the brunt of successful night fighter action. An account of the loss of Pilot Officer R Woods aircraft is given by W/O A Sergeant Royal Australian Air Force. This was their second operation and they were hit by night fighter and had to bale out. Recounts crew struggling with parachutes while others are injured or dead. Three crew members survived and were caught the next day. The final account of the operation is from Sergeant F Preston, one of the only three crew to survive from Pilot Officer J W Sholtz crew. He recounts he was blown clear after the aircraft exploded and opened his parachute and landing with some small injuries. He then headed for southern France. The final account is of Ric Green a navigator on 44 Squadron who did not fly on the attack but reported his feelings the next morning on finding so many crews missing from the previous night. There follows a role of honour for six crews lost on the operation. Notes that the first crew on the list, Flying Officer R Wood Royal New Zealand Air Force was the only Bomber Command crew lost that contained members of all three commonwealth air forces plus a representative from the United States Army Air Force.