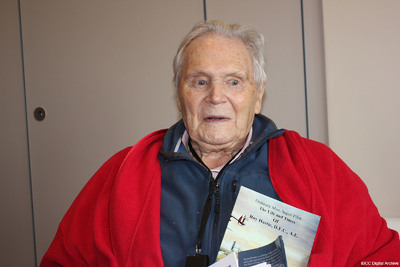 Peter enrolled in the Air Training Corp before joining the Royal Air Force. He went to Walney Island, the Air Gunnery School, and was given the option of becoming a Bevin Boy or an air gunner choosing the latter. Following training on Ansons he joined 223 Squadron, based at RAF Oulton. The squadron operated B-24s which were difficult to fly. The squadron took off with the bomber stream and escorted them back home. He recalled some incidents, one involving a German night fighter and said that the Squadron did many Window operations. Another incident was when they were running out of fuel and had to throw equipment out. At the end of the war the squadron tested whether the counter measures had worked and the aircraft guns were tested regularly. Peter remembered members of his crew, with whom he socialised and kept in touch after the war. He also belonged the One Hundred group. He stayed in the Royal Air Force after the war and was posted to Germany, RAF Watchet in Somerset and finally Egypt. He admires Bomber Command and has has written a book about their pilot, Roy Hastey.