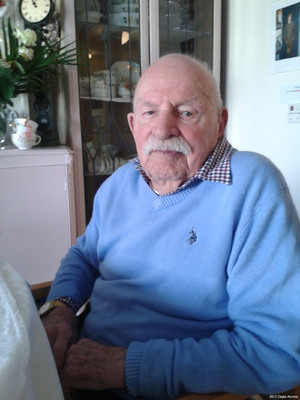 Wally was born in February 1913, and joined the Royal Air Force in 1929 as a RAF Halton apprentice, where he completed pilot training at RAF Prestwick. He flew many aircraft including Tiger Moths, Hendons and Halifaxes, and served with 51 Squadron and 102 Squadron. Reminisces of Colonel Thomas Edward Lawrence, who he met under the name of Aircraftman Shaw. Wally was shot down on an operation to Pilsen, where he evaded capture and returned to the United Kingdom. Describes and incident when he was in a Mosquito at 32,000 feet. Wally got involved with the Royal Air Force VR Training Branch and worked with Air Cadets. Wally was awarded the Distinguished Flying Medal, the Distinguished Flying Cross and the Air Force Cross. After the war, he joined the British Overseas Airways Corporation as a civilian pilot.