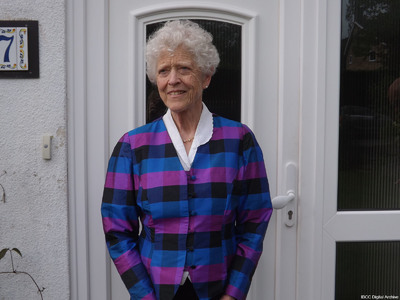 Johanna Heslam was a young child when Holland was occupied. The family had to move on several occasions because their area was being used for military purposes. Johanna experienced increasing loss as shortages began of clothing and then food. Even school materials became scarce until finally her school was taken over for military purposes. Two older cousins were hidden by the family who disguised them as old men and also found them a work placement so they would not have to go to Germany for forced labour. To ensure he was also safe from deportation Johanna’s father created a hiding place in the house. One day Johanna’s mother shouted for the children to watch as the low-flying Lancasters drop food during Operation Manna. On another occasion her neighbours mistakenly thought that liberation had come when Johanna describes her mother shouting warnings that soldiers were coming. One man was shot when he tried to retrieve a flag from his garden.