Interview with Bert Hammond. One 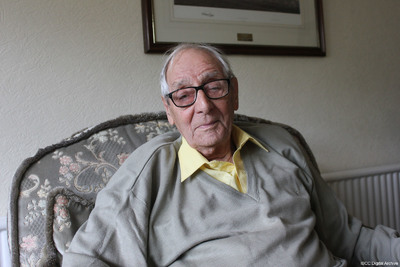 Interview with Bert Hammond. One

Bert Hammond was born and brought up in Norwich. He was a grocer’s assistant and an air cadet at the start of the war. He recalls bombing raids on Norwich and a lone aircraft machine gunning female workers leaving the Coleman’s Factory. In 1943, at the age of 18, he volunteered for the RAF as an air gunner. His initial training took place at RAF Bridlington and RAF Bridgnorth. He was posted to No. 4 Air Gunnery School, RAF Morpeth, in October 1943. His training included the use of cine-guns and target drones, and flying took place in Avro Ansons.
Posted to 26 Operational Training Unit at RAF Wing, he was formed into a crew to fly Wellingtons as a rear gunner. On one training flight, an engine failed on take-off and the pilot managed to complete a circuit before carrying out a belly landing. As Bert had learned morse code as an air cadet, he was tasked to take over as the wireless operator if necessary, therefore, moved to the mid-upper turret to be closer.
In 1944 he was posted to RAF Waterbeach in Cambridgeshire, initially with 1678 Heavy Conversion Unit to convert to Lancasters, and then to 514 Squadron as operational crew. His first operation was on the 30th of May to Boulogne. He describes a number of operations over France and Germany. On the 12th of June during an operation to Gelsenkirchen, they were hit by anti-aircraft fire putting their instruments out of action. They were diverted to RAF Woodbridge for an emergency landing.
Bert describes the differences in performance between the Mark II and Mark III Lancasters, and what happened during the day of operations. He completed his thirty operations in September 1944 and, after a period of leave, was posted to RAF Manby as an instructor with No. 1 Empire Air Armament School. He explains how he felt about the bombing of Germany, the loss of friends, and how the war was a great leveller of persons. He was demobilised in 1947.