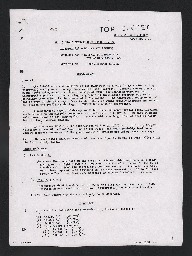 No. 5 Group Operation Order No. B. 976
Operation Chastise

A Top Secret document referring to the operation to the Ruhr dams. There is a general section describing the purpose of the operation, a section on defences and the priorities of the attack. There is a list of 19 aircraft and their crew from 617 Squadron for the attack on 16 May 1943. The outline and detailed plans are described with a route plan. A sketch of a masonry dam with a bouncing bomb is included. Finally there is an extract from the London Gazette, dated 28 May 1943 referring to Wing Commander Guy Gibson.