49 items. The collection concerns Flight Lieutenant Fred Whybrow DFC (1921 - 2005, 1321870, 170690 Royal Air Force) and consists of service documents, photographs and correspondence. After training in the United States, he completed two tours of operations as a navigator with 156 Squadron Pathfinders. After the war he served in Japan and Southeast Asia. He was demobbed in 1947.

The collection has been loaned to the IBCC Digital Archive for digitisation by Anne Roberts and catalogued by Barry Hunter. 12 airmen wearing Sidcot suits. They are arranged in two rows in a rough field. On the reverse '1941 Stormy Down Wales. Joe Harrison, top left, next to Jeoff Green, who was shot down over France, fell 10,000 odd feet - his rear turret, hit a hay… 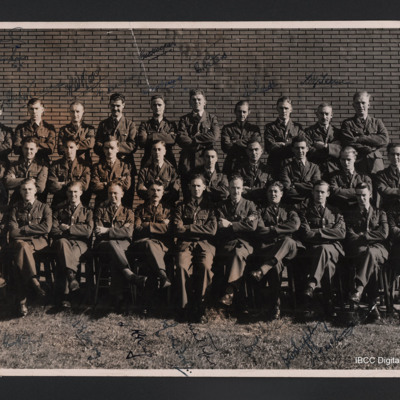 A group of 31 airmen arranged in three rows in front of a brick building. Some individuals have autographed their names. On the reverse ' Daddy & RAF Friends'. 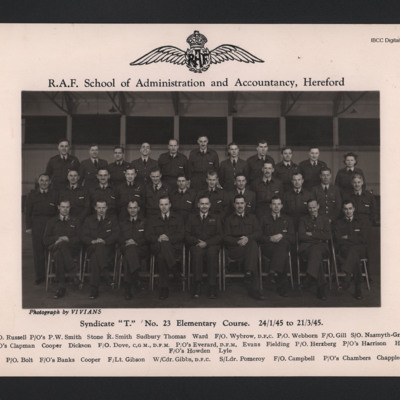 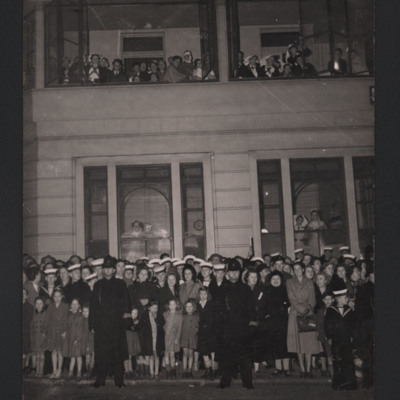 A group of civilians, children and naval cadets are standing on a pavement behind policemen. Further behind is a hospital with nurses, doctors and patients. On the reverse 'Mum and Auntie Lillian waiting for the King and Queen'. 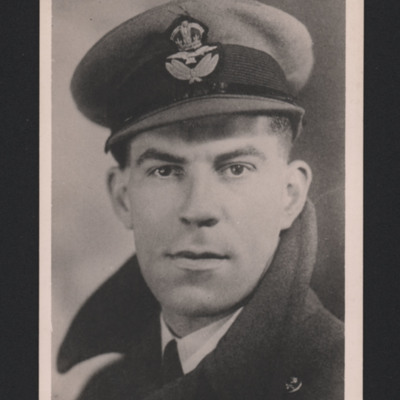 Head and shoulders portrait of Fred Whybrow in uniform, wearing a cap. 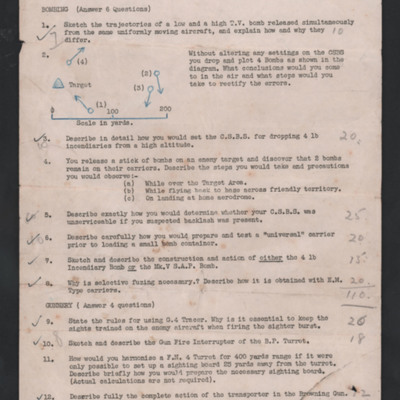 An examination paper with 13 questions of which 10 need answered. The questions are in two sections - Bombing and Gunnery. 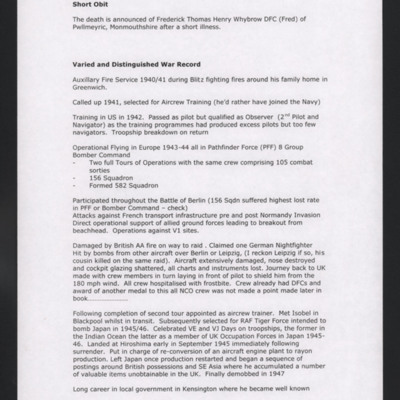 The Obituary describes his service and civilian career from training in the United States to his 105 operations. Awarded the Distinguished Flying Cross. He met his future wife, Isobel in Blackpool. Served in the Far East and demobbed in 1947. 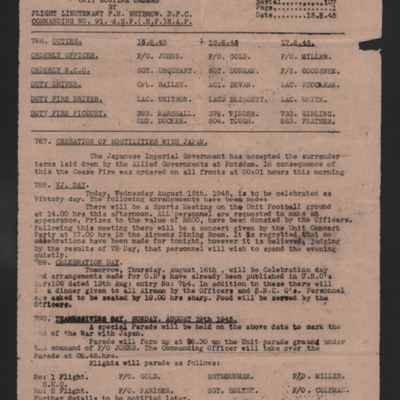 The orders refer to the cessation of hostilities with Japan and VJ day. Celebrations include a sports meeting with monetary prizes and a concert.

Letter to Mrs A Whybrow from TD Hampson 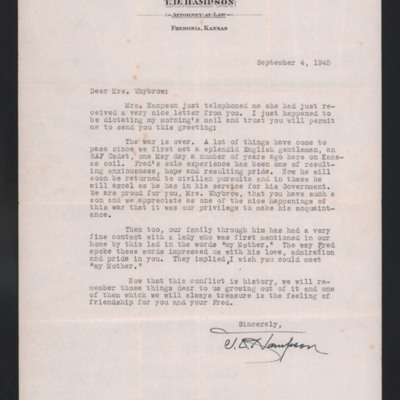 He refers to the end of the war and meeting English RAF cadets. He writes fondly of Fred, too.

Letter to Mrs A Whybrow from TD Hampson 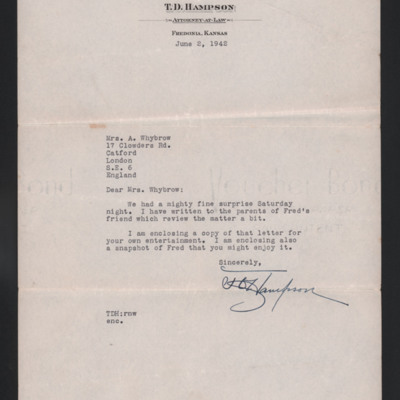 The letter refers to a surprise and encloses a copy of the letter and a photograph. 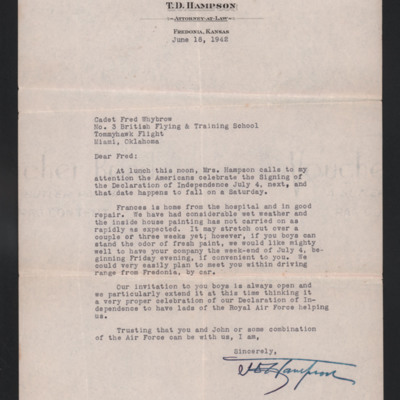 Letter refers to Independence day, Frances home from hospital, house painting and offers accommodation if Fred and his colleagues can come over. 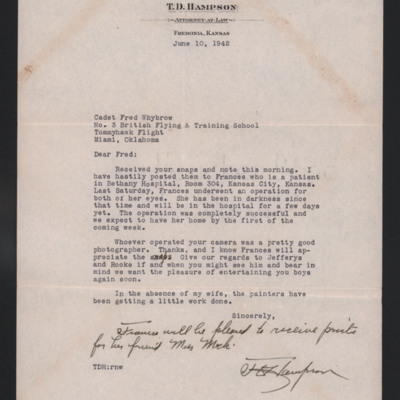 Letter to Fred refers to Ted's daughter, Frances having operations to both eyes. Also thanks him for the photographs.

Richard Todd at a club 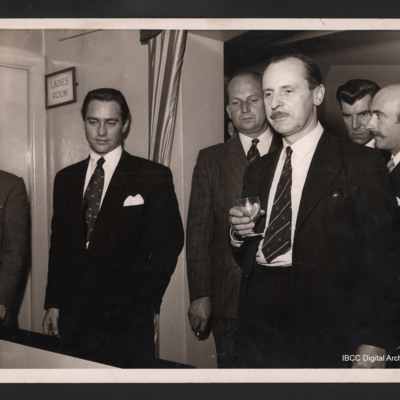 The five men are standing with serious expressions. The foremost man has a glass in his hand. Behind is a door with a sign for the Ladies room. It is captioned 'At the Club'.

Michael Redgrave and men in conversation 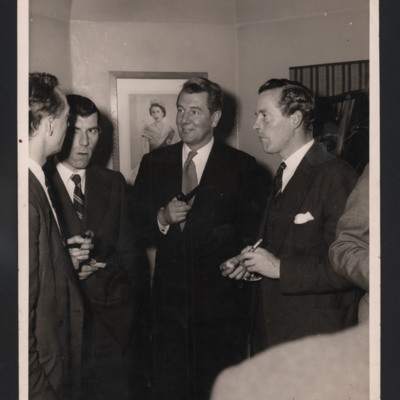 The four men are standing, dressed in suits and smoking. Michael Redgrave is in the centre holding a pipe. On the wall is a framed photograph of Queen Elizabeth. On the reverse 'Ken Bowdons Club'. 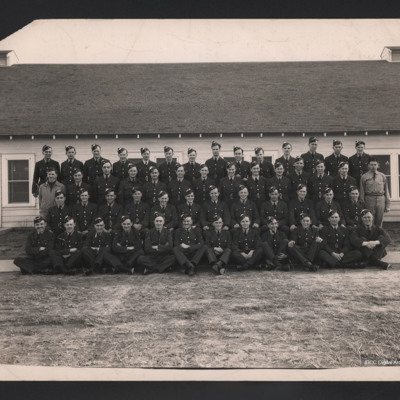 52 airmen arranged in four rows in front of a wooden building. They are wearing sidecaps with a training flash. On the reverse is 'RAF Friends'. On the reverse of the second photograph is ' RAF. Friends Miami, Oklahoma 1942'. 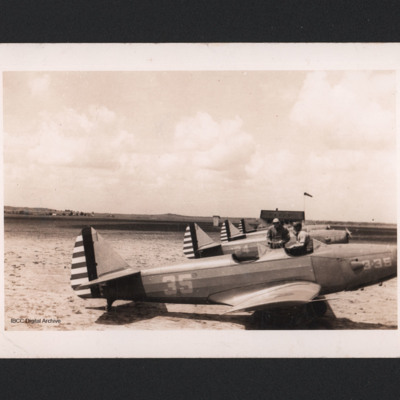 A side view of four training Cornell aircraft in a straight line. The nearest is 'B.35' and the next is 'B.24'. Two airmen are located close to the first aircraft. On the reverse is 'Stearman PT13A [incorrect] Miami Okla'. 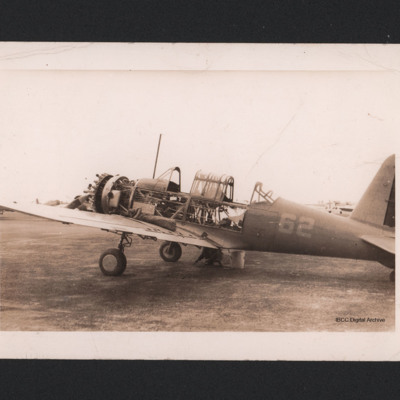 A side view of a training aircraft '62' stripped for inspection. On the reverse 'BT17A Miami Okla'.

In the Flax Field 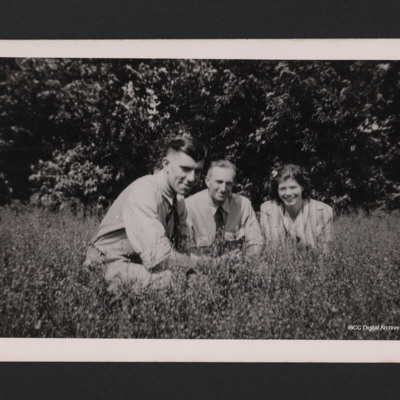 Two airmen and a woman sitting in a field. It is captioned '"In the Flax Field" Fred Whybrow Bernard Rooke Frances Hampson July 5, 1942'.

South side of square, Fredonia, Kansas 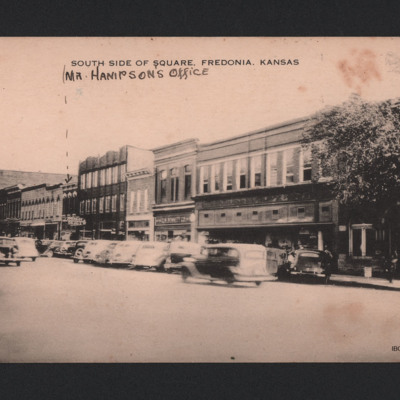 A street scene with several cars angle parked into the pavement. Behind is a series of low connected buildings. It is captioned 'South side of square, Fredonia, Kansas' and annotated 'Mr Hampson's Office' with an arrow pointing to his office. 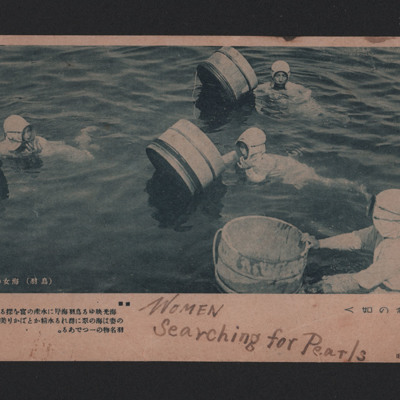 Four women wearing diving masks with buckets are on the surface of the sea. The postcard is captioned in Japanese but handwritten is 'Women Searching for Pearls'. On the reverse is 'Dedicated to the Adjutant with my best regards Your faithful… 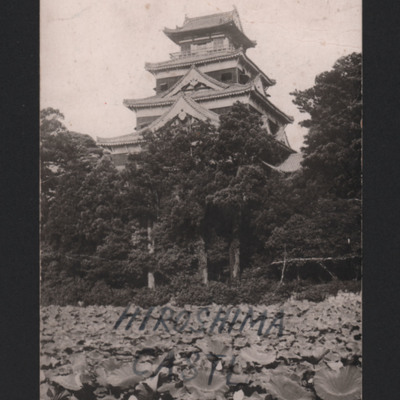 A postcard of a temple with a Japanese caption. In English is handwritten 'Hiroshima Castl [sic]' On the reverse 'Dedicated to the Adjutant Mr Whybrow Interpreter Hideo Aoki Feb 5940-7 4192-4'.

Fred Whybrow and an airman 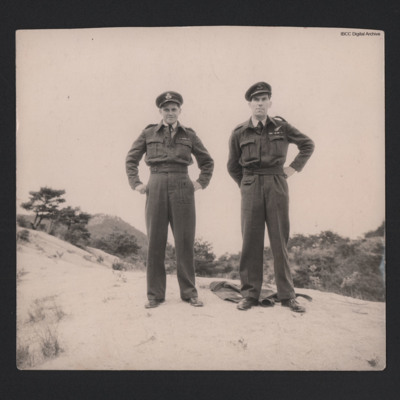 Two airmen in uniform standing on a hillside. Fred Whybrow is on the right. 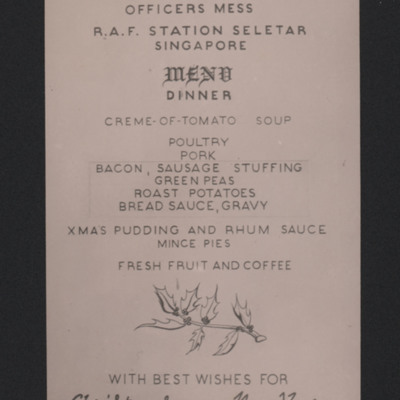 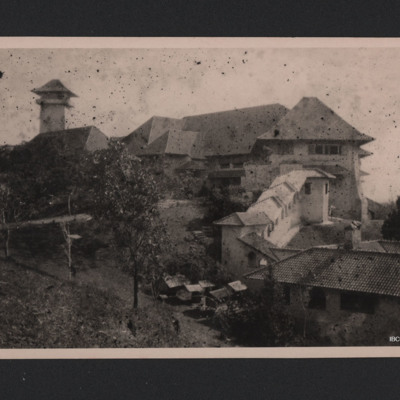 A large building with many rooms and roofs at different heights. It is set in ornamental grounds. On the reverse 'Jahore Palace January 1946'. 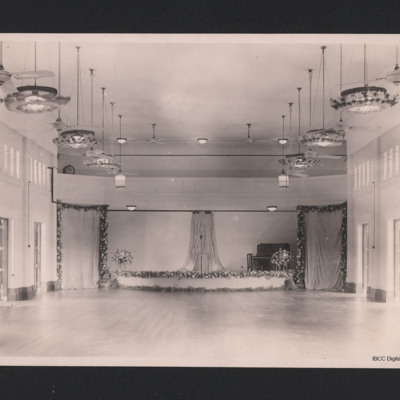 An ornate room with many hanging lights. At the back is a long table laid with decorations and flowers. On the reverse 'The Dining Hall before the tables were brought in. Seletar Dec 19th '45'.
View all 49 items